Aloisi confident Roar will bounce back

Brisbane Roar coach John Aloisi does not expect his shell-shocked players to lose their confidence after his side’s 6-3 loss to Perth Glory.

The Roar slipped from top spot on the Hyundai A-League table after conceding six goals to seventh-placed Glory, including five from set pieces, at nib Stadium on Saturday night.

Brisbane twice took the lead during a frenetic 13 minutes in the first half during which five goals were scored.

Perth eventually steadied and charged to a club-record fifth straight win, denying the Roar the chance to move three points clear at the top.

“We’ve got too many good players for it to rattle their confidence,” a disappointed Aloisi said post-match.

“We’re still in a good position, we’re still confident in what we’re doing.

“We might have to work on set pieces against us a little more, but in terms of the way we’re playing and creating chances, we still believe that we can go and beat anyone wherever we play them. 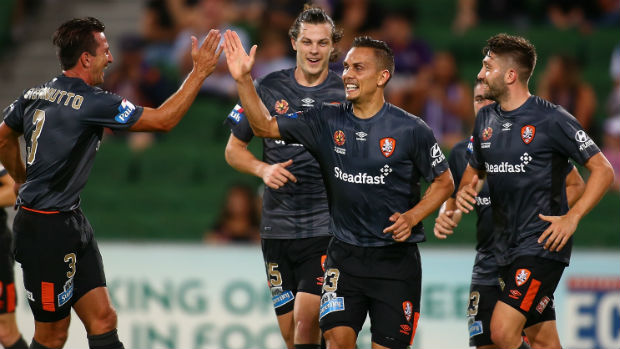 “We can’t just throw away the season now when we’re still equal top. It’s one of those days where you don’t expect to concede so many off set pieces, and that killed us.

“When you’ve got experienced players like Matt McKay, Jade North, Thomas Broich, Corona…they’ll be able to deal with it, but it’s upsetting.

“We’ve got seven games left now and we have to try and focus on the next one and see if we can get the result we want in Adelaide.”

Aloisi admitted his team struggled to cope with Glory’s physicality and had no answer to Diego Castro’s dominance on the ball.

Brisbane has now won just two of their past nine matches on the road, but the coach is not fazed by his team’s away form.

“Of course you want to win more games away from home, but we’ve got an opportunity next week to put that right.

“It’s not a concern…we want to keep on improving every week and next week’s a good opportunity for us.”

Aloisi said Jamie Maclaren (hamstring) and Shane Stefanutto (groin) had pulled up well after carrying niggles into the match and expected the pair would be available for next Saturday’s clash with Adelaide United at Coopers Stadium.