Brisbane Roar Head Coach John Aloisi will waste no time in launching a new era at the club.

Aloisi, 39, will relocate to Brisbane from Melbourne next week. He will watch the Roar play Spanish La Liga side Villarreal next Wednesday and then will prepare the Brisbane squad for the club’s sell-out showcase match against Liverpool FC at Suncorp Stadium on Friday, 17 July.

The former Socceroo, who has signed a two-year contract with the Roar, said he would build on the strengths that had made the three-time Champions the benchmark of success in the Hyundai A-League.

“I believe this is the right place for me,” Aloisi said.

“It is a great opportunity to work with these players and this club. I’m ready and I am confident that I can help this club become successful again.”

Aloisi said he would include managerial methods he saw successfully employed by Spanish giants FC Barcelona during a week-long stint with the four-time European Champions last year.

“One of the great things I saw at Barcelona was how the club still gets the best out of players who have won everything,’’ Aloisi said.

“Everything was competitive in training and they trained at an intensity I hadn’t seen before.

“If you can do that at training you will automatically do that in a game.

“I see parallels at the Roar as they have won a lot of silverware in recent seasons and now the challenge is for us to aspire to new heights in season 2015/16 and beyond as we reaffirm our standing as Australia’s premier football club.”

Aloisi said he had spent many hours watching the Roar in his job as a Fox Sports football analyst and feels he already has a strong knowledge of the squad and a clear understanding of the Roar ethos.

“Our player list is pretty full right now but I will be looking over the coming weeks to see what players are around who could bring something extra to what already is a very talented squad,” Aloisi said.

“John brings to the club a life-long passion for football and a fresh hunger for success,” Fong said.

“We have begun rebuilding the club and having John on board now ensures we can maximise the off-season as we set our targets for season 2015/16 across all competitions in which the Roar participates.”

Roar captain Matt McKay said the playing group was eager to get to work with Aloisi.

“We are looking forward to a new era where we can grow and be even more successful than in the past,” McKay said.

Aloisi said a strong support team would be assembled in the coming weeks.

“I know that is important to help Brisbane continue the success that our players, members, sponsors and supporters have come to expect,” Aloisi said.

“One of the ways I plan to achieve that is to reignite the spirit that made the Roar so strong.

“I want to get those with Orange in their veins back involved in the club. I want to tap into the expertise and experience of some of those who have drifted away for whatever reason.” 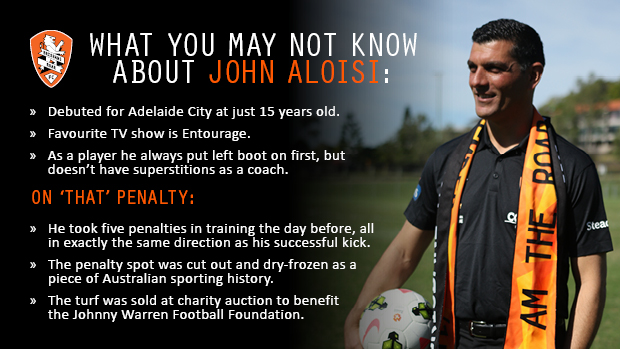 Aloisi made 55 appearances (27 goals) for the Socceroos and famously scored the winning penalty to secure Australia’s place at the 2006 FIFA World Cup.

He is the only Australian footballer to have played in Europe’s three major leagues – the English Premier League, Italy’s Serie A and Spain’s La Liga.

He played 459 games and scored 127 goals across the three competitions at clubs including Portsmouth, Coventry City, CA Osasuna and Deportivo Alavés. He played in the Hyundai A-League with Central Coast Mariners, Sydney FC and Melbourne Heart.