Brisbane Roar’s Brandon Borrello believes the Olyroos have the fire power to book their ticket to the 2016 Olympic Games.

With their training camp in Dubai now completed, Aurelio Vidmar’s Australian Under-23 squad arrived in Doha today for the start of the AFC U-23 Championships, which doubles as the qualifiers for the Olympics to be held in Rio de Janeiro in August.

Borrello is one of three Roar players in the squad, alongside fellow striker Jamie Maclaren and defender James Donachie.

The speedy right winger said the training camp over the past week had been extremely valuable to the squad’s preparations.

“We’ve trained hard over the last few days and all the boys have come in and gelled,” Borrello told FFA TV.

“It’s been a great stepping stone in the lead up to our qualification.

“With this team that we have going into the qualification, I believe we can go quite far,” Borrello added.

“It would mean the world [to go to the Olympics. This has been one of my goals for a while now. I’m focused that I’m in the team that goes to qualify for an Olympics.”

Borrello, who has been in exceptional form for Brisbane Roar in the Hyundai A-League, is likely to be part of as exciting, attacking system Vidmar will unleash at the tournament.

He has already form a lethal partnership at Hyundai A-League level with Olyroos team-mate Jamie Maclaren (below), which he hopes they can take to another level in the green and gold.

With the likes of Adam Taggart, Andrew Hoole, Connor Pain and Mustafa Amini also in the squad, Borrello believes the goals will flow in coming weeks. 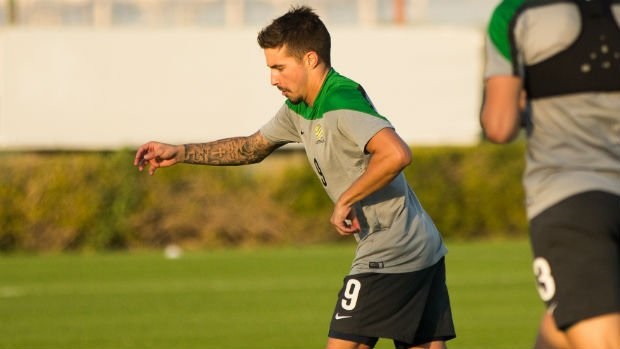 “It’s great…knowing there’s another player on the pitch that can score goals,” he said.

“It’s not just coming from me or [Maclaren], it’s coming from everyone across the board. We can all score goals here and we play an attacking style of football that allows us to score goals.

“Preparation like this, the players get an understanding who makes the runs in certain ways.

“I think when we have a better understanding of each other, the goals will flow.”

The Olyroos open the tournament on Thursday against UAE, followed by games against Vietnam (Sunday) and Jordan (Wednesday) to round out the group stage.