Holman brings a wealth of experience to the Roar side, following a lengthy club career in Europe and the Middle East, as well as featuring regularly for the Australian national side.

Holman has played 63 times for the Socceroos after debuting against Bahrain in 2006 and scored two goals at the 2010 FIFA World Cup including a 25-yard pile driver against Serbia.

“Brett is a quality player and exactly what we are looking at bringing into the club,” Aloisi said. 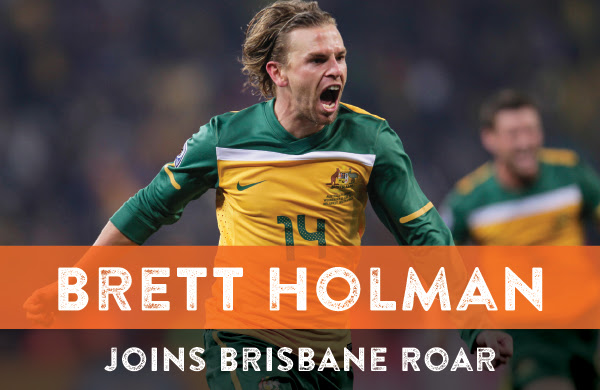 “His club career and international careers have been played at the highest standard. His goal against Serbia in the World Cup was stunning.”

Between 2002-2013, Holman played top-division European football in Holland’s Eridivisie and the English Premier League. During his time in Europe, Holman played for high-profile clubs such as AZ Alkmaar (92 appearances, 16 goals) and Aston Villa (27 appearances, 1 goal).

The 32-year-old has played in the Middle East with Al Nasr and Emirates Club for the past two seasons, scoring 11 goals in 63 appearances for the two clubs.

Football Director Craig Moore believes Holman will be a strong contributor in Brisbane.

“It is great to get Brett back to Australia where he still has plenty to offer,” Moore said.

Holman will soon join his teammates in preparation for the Hyundai A-League season opener against Melbourne Victory at Suncorp Stadium on Friday, 7 October.