Brisbane Roar is delighted to confirm the signing of Australia Under-23 international Jordan Holmes ahead of tonight’s FFA Cup opener at Moreton Daily Stadium.

The Olyroo joins the Roar less than two months on from his trip to Tokyo 2020 and will be available for selection for the Round of 32 clash with Peninsula Power.

Holmes, 24, has spent the past eight years in the United Kingdom, having joined the Bournemouth academy in 2013 following a stint with the Australian Institute of Sport.

The goalkeeper moved to National League side Ebbsfleet United in August 2019 and made 39 first-team appearances across all competitions before being lured to Brisbane.

“It’s great to finally get the deal over the line,” Holmes said.

“There was interest from both ends and some interest in me from the A-League over the last couple of seasons.

“I haven’t been home for a while due to COVID and with this massive opportunity and for the way of life, Australia was the best way to go for me.

“I’ve watched quite a bit of the league and got a lot of friends that play in the A-League. Obviously the Roar has a great a history, a very successful past. Hopefully I can help with that winning mentality and help bring some titles back here.

“But first and foremost for myself it’s about playing some quality games and getting that consistency at the top level.” 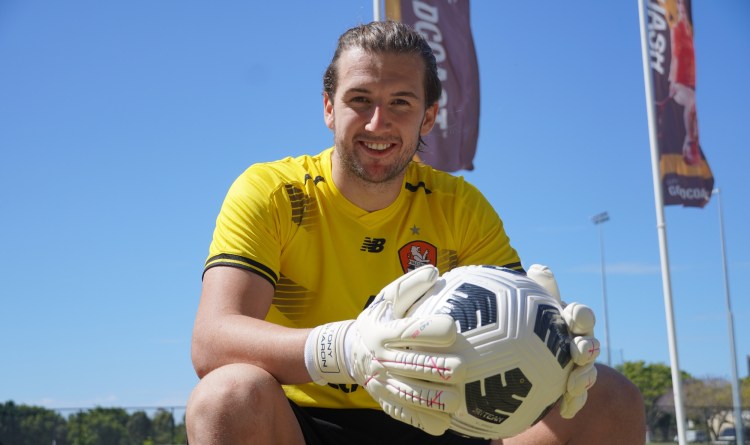 Holmes said his recent Olympics experience would hold him in good stead for the upcoming campaign.

“As a kid you grow up wanting to play at the highest level you can,” he said. “To get to the Olympics was a big honour for me and my family.

“It was an unforgettable experience for everyone involved. I can’t thank enough the coaching staff and everyone around me – family, friends – for helping me get to that stage.

“It’s something I can take forward as a life experience going into this season.”
Roar Head Coach Warren Moon welcomed Holmes to the Club as the side gears up for its first competitive match since the end of last season.

“It’s great to finally have Jordan here and to see him settling in quickly with the group,” Moon said.

“It was a long trip back to Australia for him but he’s been with us for a few sessions now.

“Jordan comes to us at a great age and with a good level of experience already from his time in England.

“We think we have two very talented goalkeepers now in Jordan and Macklin Freke who have exciting careers ahead of them and will push each other for the number one spot all season.

“We have a lot of belief and confidence that they will do a great job for us.”