“I know for sure it is going to be a tough contest against Ivan,” Broich said today as the Roar began their training preparations for the Hyundai A-League Round 12 match up between the competition’s second- and third-placed teams.

Broich had an intense contest with Franjic when the former Roar defender came on as a 58th minute substitute in the 1-1 draw between Brisbane and Melbourne City in Round 7 on 20 November.

The German expects the same again with some added “mind games” because of how well the former team-mates know each other’s game.

“After training (when Franjic was at the Roar) we did one-on-one sessions for me to run at a player and for him to get used to defending, ” Broich recalled.

“Now we are not in the same team any more. Everyone knows what they other is trying to do. It’s going to be mind games, as well, it’s going to be interesting.”

Broich expects an entertaining and free-flowing game against a confident City side that has won four on the trot since the draw in Brisbane.

He says the Roar will not be intimidated. 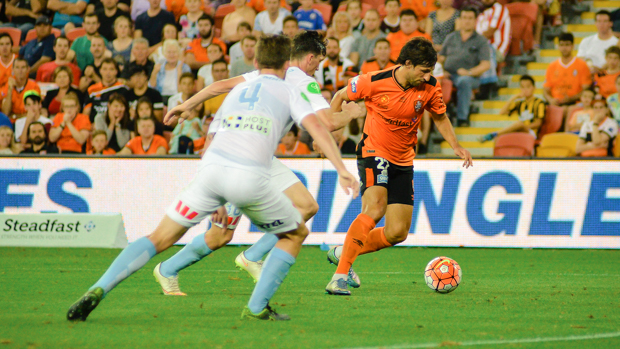 “We are back on a winning streak too and we need to make sure that continues,” he said.

“We’ve got our structures and we are going to play to those structures.

“We are a lot more solid defensively this season while at the same time we are keeping the ball quite well and creating a lot of chances and that is not going to change against City.

“We all know they are in great form but we also know we can hurt them. That is our main focus.”

Broich has provided a number of valuable assists in recent weeks, including the pinpoint pass and clever off-the-ball run that created the goal-scoring opportunity for Dimitri Petratos in the 1-0 win over the Mariners on Sunday.

Broich is yet to score this season but says it is only a matter of time before he finds the net.

“It is nice to get all these assists but I’d love to score,” Broich said.

“I am getting in decent positions lately and I think goals are going to come.”