Six years ago today, we witnessed what many fervently believe to be the greatest ever Hyundai A-League Grand Final (unless you’re a Mariners fan).

Roar at home at a sold-out Suncorp.

Orange Sunday 1 – the first of a trilogy of Brisbane home grand finals that’d play out over the coming few seasons.

The game’s climax has become Aussie football folkore of the most spine-tingling kind.

The Mariners gave as good as they got but neither side could break the deadlock in 90 minutes – cue the most extraordinary extra time you’ll ever see.

Central Coast went 2-0 up in the first half of extra time with Adam Kwasnik and Ollie Bozanic appearing to hand the trophy to the visitors.

They certainly celebrated as if the trophy was headed to Gosford.

But Roar kept playing their possession football and kept pressing.

Henrique finishing off a flowing move to make it 2-1 with three minutes of extra time left.

Could they? Could this really happen?

Suddenly the 2000 travelling fans and the Mariners bench sensed the momentum had shifted. The crowd lifted.

A debatable foul wasn’t given in favour of the Central Coast and they cleared for a corner.

The noise was deafening as the corner was curled into the six yard box while of scrum of players contested the slung in ball.

But one man stood tall. 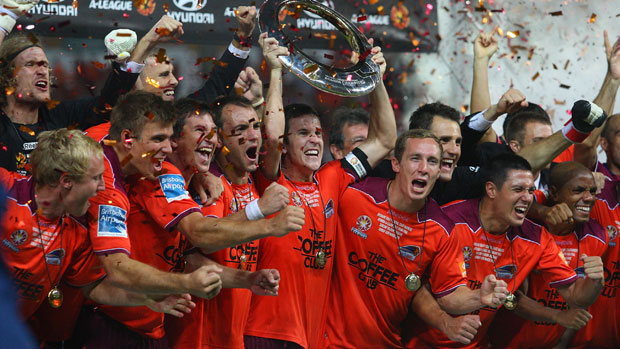 And famously, incredibly, it was that man Erik Paartalu – who had spied cameras crowding the Central Coast bench anticipating their winning reactions – who jumped highest and powered home the equaliser on the final whistle.

The Mariners were sunk.

There was only ever going to be one winner in the shootout now.

Cue absolute, utter, beautiful mayhem on and off the pitch. There were tears from the Mariners, understandably.

The Mariners got their redemption two years later in Sydney, while the Roar would enjoy two more grand final wins at Suncorp in 2012 and 2014.

Orange Sunday 1 will never be forgotten by those who watched on amazed.

And for those at Suncorp on Sunday March 13, 2011, it’s a grand final few will ever forget for the heartbreak or joy it brought.