It must have been something Brisbane Roar Youth coach John Sime said in the dressing rooms.

His Young Roar side started both halves in sensational fashion today – putting the ball into the Redlands United FC net just 1 minute 56 seconds after the starting whistle and again just two minutes after the start of play in the second half.

At both of those points in the game, it looked like a rout by the Young Roar was on the cards in their PlayStation 4 National Premier Leagues Queensland Round 22 clash.

But credit to a resolute, if under-strength Redlands side.

They fought hard for possession and pulled a goal back just two minutes after the Young Roar had gone 2-0 up and had several chances to grab an equaliser in an improved second half which augured well for their PS4NPLQLD Finals Series hopes.

The Young Roar started with one of their strongest sides in weeks with a line-up that included Nick D’Agostino, Luke Pavlou, Abrahim Yango, Tom Bilic and Patrick Theodore – who have all been training with the club’s Hyundai A-League squad but getting only limited (in some cases none) game time in recent matches against Liverpool FC, Western Sydney Wanderers and Melbourne Victory.

They looked a class above their opponents from the kick-off and their speed of passing and strong runs instantly carved open Redlands. It was no surprise when Theodore got behind the defence on his first forward run and crossed for Yango to side-foot in from near the penalty spot.

The chances would continue to come for the Young Roar in a stunning opening 20 minutes at Cleveland Showgrounds (where the game was moved from Perry Park).

D’Agostino shot wide from right in front, Adam Sawyer put his effort onto the upright, Austin Ludwik went close off a corner and Yango had a penalty appeal turned down.

Redlands keeper Sam Chandler also made two impressive saves to deny Theodore from 20 metres in the 10th minute and dived bravely at D’Agostino’s feet just as the Roar centre forward was about to shoot in the 20th minute.

But in the 24th minute, surprisingly given how the match had flowed to that point, it was Roar keeper Bilic who was called into action when Redlands player-coach Graham Fyfe burst through a flat Roar defence.

Fyfe’s shot was blocked by the advancing keeper but it was a turning point.

It was as if all Sime’s instructions then went out the window as the Roar lost their shape and their renowned passing game.

Redlands began to play their way back into the match and could easily have scored a first-half equaliser in the 29th minute when Bilic tipped a long-range shot from Jayden Prasad over the crossbar.

A pep talk from Sime at half-time re-aligned the focus and his team began the second half with a wonderful team goal – good play down the left involving fullback Lachlan Weier and Yango who crossed for D’Agostino who buried an unstoppable shot from 15m into the Redlands net.

Two minutes later Redlands showed they were still up for the challenge – even though the result either way would not affect their position on the table and they had several regular first-teamers on the sidelines to ensure their availability for the Finals Series.

Tall striker Tyler Brayley-Combe found space on the right and crossed to the far post where an unmarked Prasad slotted into the Roar net for 2-1.

Both teams had a chance to score another – an extended Bilic foot denied a Redlands equaliser in the 51st minute while another fine save from Chandler stopped Daniel Leck getting a third for the Young Roar. 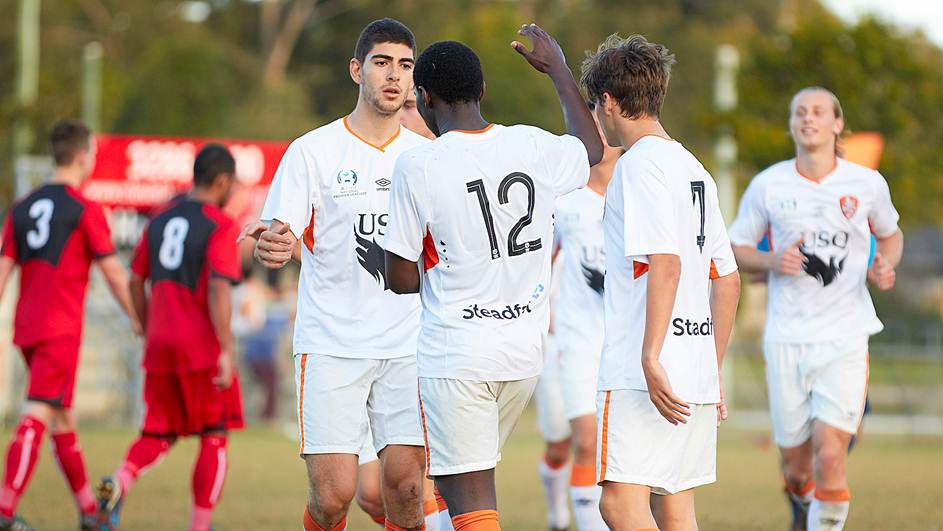 Sime admitted he was pleased with how his team started both halves but was puzzled as to how his players went off-message.

“We forgot about our passing game and started hitting it long before half time then in the second half we probably started passing too much and should have been shooting more,” he said.

“But we created quite a few chances and that was pleasing.”

Fyfe said he thought his side could have won the game.

“We are very confident going into the finals. We are looking forward to it,” he said.

“In the second half the boys tried everything they could and were just a little unlucky they lost it in the end.”

Player of the match D’Agostino – who leaves with the Joeys on Tuesday for a European tour ahead of the FIFA Under-17 World Cup in Chile in October – said Redlands were difficult to put away.

“We started really well – the first half was a bit sloppy towards the end. The second half we moved the ball around a lot, better ball speed, a lot higher intensity, and good combination plays in the front third and a good finish in the end.

“We have improved a lot this season which is really good.”

In the earlier match, the Brisbane Roar Under-18s defeated their Redlands Unitged counterparts 7-1.