Fit Theo excited to be back playing

After missing only two games through injury in eight seasons of Hyundai A-League football, to spend nearly a year on the sidelines has truly tested Roar keeper Michael Theo.

The competition’s most decorated goalkeeper broke his wrist just one week out from the start of the new season last year then battled back for four games only to be sidelined again with a serious groin tear.

He then had further time on the sidelines when the steel plate inserted in his wrist to help the shattered bones heal had to be removed, then injured a hip flexer muscle just as everything was getting back on track in pre-season training this time around.

But those battles will all be consigned to history this Saturday with Theo schedule to return to the playing field when the Roar take on the Under-23 All-Stars selected from the ranks of the PlayStation 4 National Premier Leagues Queensland clubs.

The match kicks off at 4.30pm and precedes the PS4NPL Finals Series Elimination Final between Queensland Premiers and Champions Moreton Bay Jets FC and Northern NSW Premiers Edgeworth Eagles FC. Admission is $10 (adults); $5 (concessions, children under 16, pensioners and students); FREE (all FFA-registered players 16 years and under  and children under five years).

Theo’s last game for the Roar was a 2-2 Hyundai A-League draw away to Perth Glory on February 28 (pictured below).

The five-time Championship medal winner, who has notched a career 193 Hyundai A-League apperances with the Roar and Melbourne Victory (2005-09), says his time away from the game had tested him mentally as well as physically.

“It was a strange feeling watching the boys and a little frustrating not being out there trying to help them out,” he said.

“You don’t realise how much you miss something until it is taken away from you.

“And mentally it was quite tough too. Being injured is frustrating but that’s football, that’s the reality of our job. You’ve just got to stayed focused and concentrate on your rehab.” 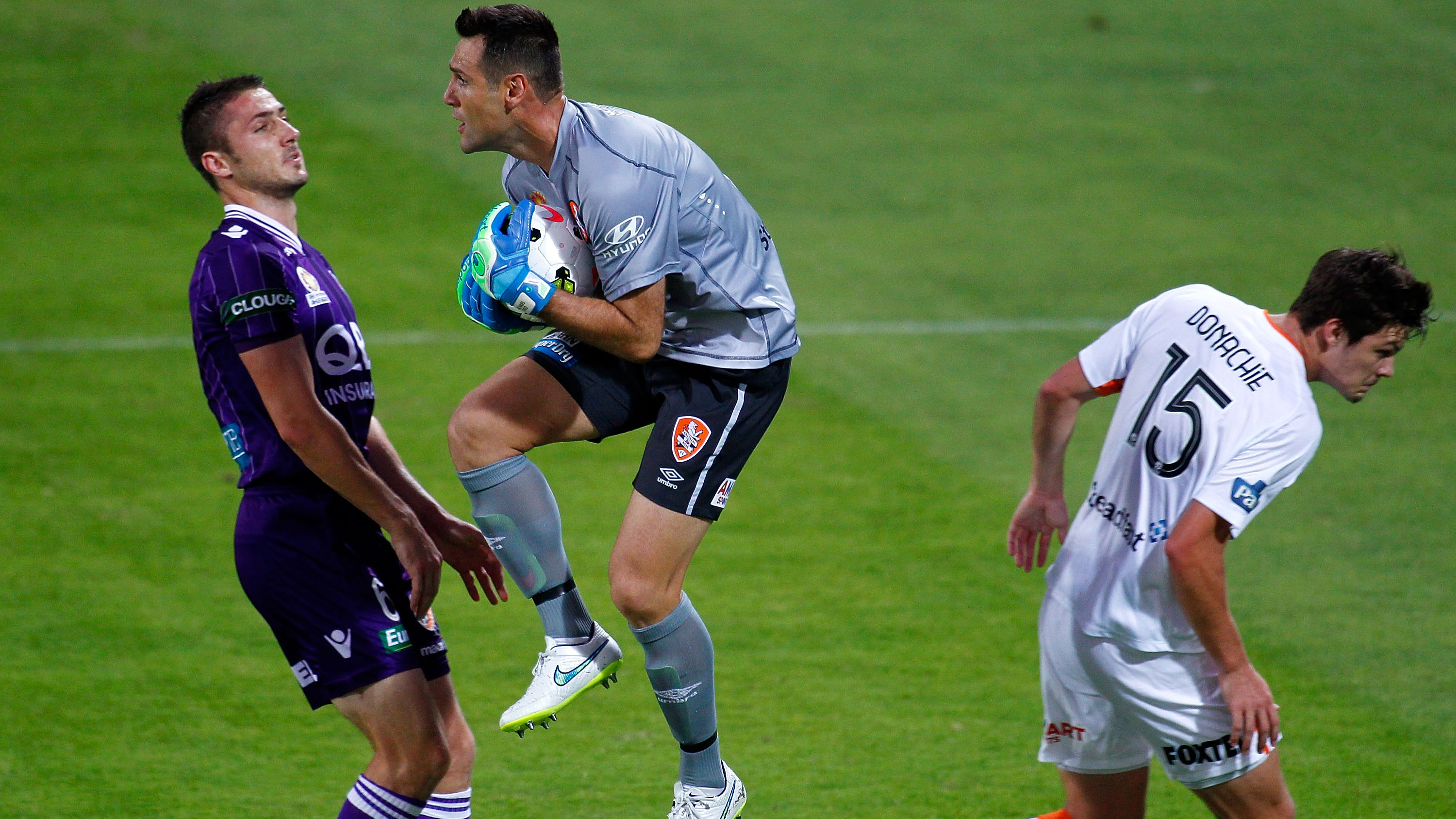 Theo says there will be no nerves when he pulls the gloves on again but genuine excitement to be back playing.

“This is a reward for all the hard work I have put in in terms of my rehabs,” he said.

“It is really exciting just to be training regularly again and being around the guys. Being back in that environment has given me a real big lift.

“Now it is a matter of getting a good training block under my belt and some game time and being ready for week one of the season which is only a month away.”

Time on the sidelines allowed Theo to get a new perspective on the Roar and how they play and he is in no doubts there is the talent in the current squad to ensure the club contests the silverware this season.

“For whatever reason, things didn’t go our way last year. We’ve been used to being up there and winning,” Theo said.

“It is about working hard and implementing the game plan that the Boss (Head Coach John Aloisi) wants us to execute.

“It is all about continuing our high standards, winning and being part of something special.

“When that is taken away from you, as it was for the Roar last year, it gives you that hunger and passion to go again and to go even harder.”

The PS4NPLQLD Under-23 All-Stars squad was announced today.

• The Roar’s scheduled training match on Wednesday night against the Young Socceroos, which was to be part of an FFA-sanctioned coaching clinic on the Sunshine Coast, has now been cancelled.