Brisbane Roar defender Corey Brown visited his junior club The Gap FC today as the Hyundai A-League prepares to celebrate the Play Football round this weekend to promote junior football registrations around Australia for the upcoming grassroots season.

The Roar’s home match at Suncorp Stadium against Central Coast Mariners on Saturday (4.15pm kick-off) will celebrate grassroots football with a march past involving clubs who are part of our ONEGOAL REWARDS program along with half-time games featuring MiniRoos players.

This weekend will also see the Roar’s two millionth home game fan come through the turnstiles with fabulous prizes on offer for fans and members.

Everyone in the stadium will go into a draw to be in the running for prizes including lunch with Roar Head Coach John Aloisi and several players, Samsung smartphones courtesy of Telstra Brisbane North and a $6000 Tag Heuer timepiece (members only).

Brown today signed autographs and posed for photos with junior players from The Gap FC, where he played for nine years. He also had a kickaround with Gap Gators juniors Flynn Sills, 12, his brother Ryan, 9, and fellow “lefty” Archie Hawke, 8.

“It’s a massive family club – my brother played there as well. We used to love going down there on Saturday mornings and for training as well,” Brown said.

Brown (below) is one of two Gap Gators in the Roar Hyundai A-League squad (along with Luke DeVere). He says The Gap FC is all about quality coaching and developing potential in a fun and safe environment.

“The Gap has a really good history of producing players for the next level of their footballing careers and they have a really good women’s program as well,” he said. 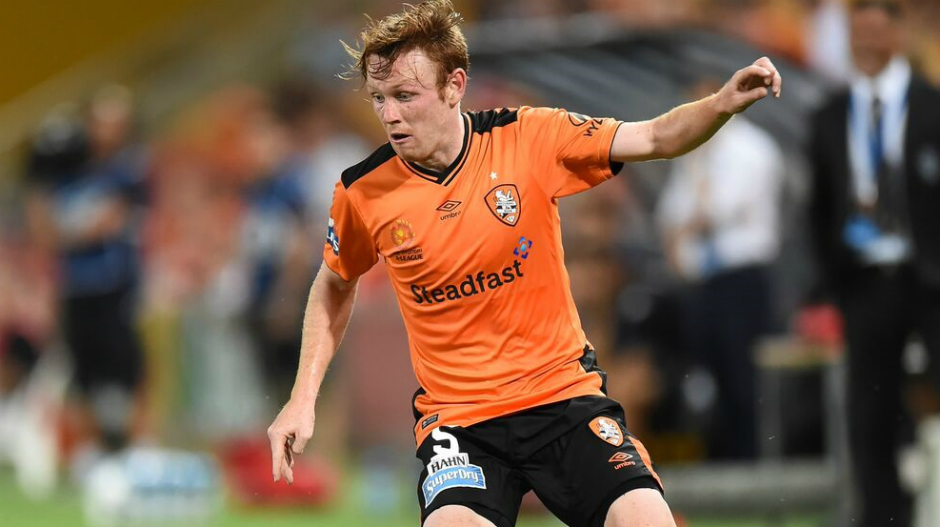 Last year saw record-breaking player registration numbers with a 20 per cent lift in participants playing in registered competitions across the country and Football Federation Australia (FFA) is hoping for even more sign-ons in 2016.

“The 2016 grassroots season is just around the corner and there are so many reasons to get involved in playing football. Anyone can join the game today as a player, coach, or referee by registering at myfootballclub.com.au,” said FFA Chief Executive David Gallop.

“With over 1.18 million Australians playing football in registered competitions in 2015, now is the time to be involved in the world’s most popular sport.

“For junior footballers between 4-11 years, AIA Vitality MiniRoos is the fun introduction to football for girls and boys.

“Last year we saw over 214,000 AIA Vitality MiniRoos participants, an increase of 10 per cent from 2014. You will see a selection of these participants during half time at Hyundai A-League matches around Australia this weekend.

“The Play Football Round is an ideal opportunity to highlight the entire player pathway from the girls and boys, mums and dads at the grassroots to the Women and Men as the elite levels of the Westfield W-League and Hyundai A-League.”

Brown’s visit to The Gap FC is part of a nation-wide program in which all nine Australian-based Hyundai A-League clubs take selected players and coaches to visit their local grassroots clubs.

The 2016 Play Football campaign will once again support the annual recruitment drive for grassroots Coaches and Referees, who along with players are the game’s greatest advocates and are two key roles that have a great influence on a player’s experience.

Players, coaches and referees can join the game by logging onto Australia’s biggest online sports registration portal, which can be found at MyFootballClub.com.au

To find out more information about the AIA Vitality MiniRoos, go to miniroos.com.au

To book tickets for this weekend’s Hyundai A-League Round 18 match between Brisbane Roar and Central Coast Mariners, click here