It was epic drama. Brisbane Roar. Western Sydney Wanderers FC. Suncorp Stadium. In front of a sold-out stadium of incredible noise and colour, the Hyundai A-League Grand Final on May 4, 2014 was pure, edge of the seat, theatre.

The fans made it extra special, too.

An estimated 10,000 plus Wanderers fans made the journey north. They took over Brisbane on Grand Final weekend and were a superb advert for their club and the league.

The 40,000 plus home fans were in fine voice too making it one of those days to remember in what was dubbed “Orange Sunday 3”.

After a tight opening half, Wanderers had one hand on the trophy after Matt Spiranovic powered home a superb opener just inside the hour mark.

The Socceroo evaded marker Thomas Broich and from a Shinji Ono corner angled his header past Michael Theo.

But with Besart Berisha on the park anything can, and usually does, happen.

In his final game as a Roar player and with time ticking down, Berisha found space inside the red and black defence to guide home Thomas Broich’s curling cross. 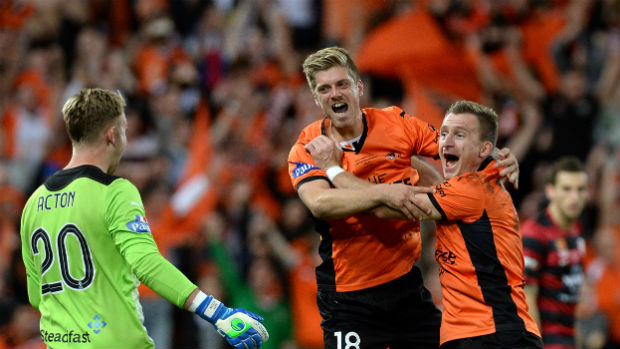 With just four minutes of regulation time left it was 1-1 and game on.

Berisha had done it but could Roar go on and win a third Grand Final? Or could the tough as teak Wanderers find a way back?

The stadium was a sea of colour and extraordinary noise as the weary combatants eyed off extra time.

It was two sets of teams giving it their all. But Roar finally found a way thanks to a familiar grand final hero.

Striker Henrique slipped into the box, contested a crossed ball and won it – incredibly for a player of his stature – with the ball falling to a Roar player lurking wide.

With Wanderers stretched the cut-back to the little Brazilian was perfect and with just enough space, he volleyed past Ante Covic into the roof of the net. 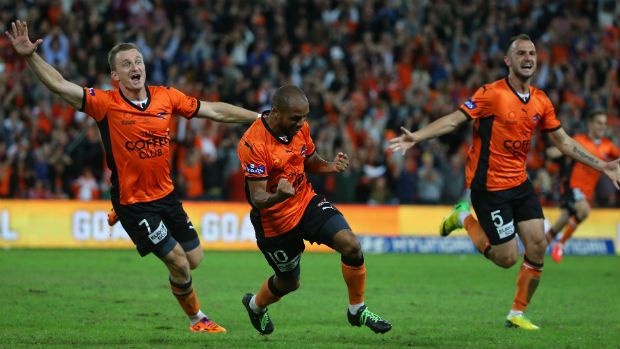 Cue mayhem. Roar fans sensed a third Championship. Wanderers supporters did not stop singing…. but it wasn’t enough for the visitors.

Roar held on to win 2-1 in a stunning comeback to give coach Mike Mulvey his first ever A-League Championship trophy.

It was sweet revenge for Roar, too, who were knocked out by Wanderers the previous season in the semi finals.

What a day. What an occasion. Breathtaking, it was.