Halloween treat with the Roar on Saturday

Could there be anywhere better to celebrate Halloween than in The Den at The Cauldron cheering a team in orange and black?

That’s the scenario this Saturday when Brisbane Roar set out to make Suncorp Stadium an even more fearsome place to visit with a special Halloween Party-themed hosting of Adelaide United FC in Round 4 of the Hyundai A-League season 2015/16.

Members and fans are encouraged to come to the match in their spookiest Halloween costume and cheer on the Roar boys as they strive to get back to winning ways against the Reds (6.30pm kick off).

There was a terrific atmosphere at the stadium at the last home game when 14,471 fans cheered the Roar to a 2-1 victory over Central Coast Mariners with thousands staying on to participate in the on-field full club photo ( below ). 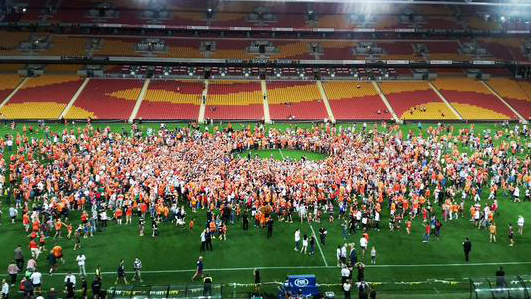 With your support, we can ensure an even bigger crowd this Saturday for what will be another fun night and top-class football from two sides that love to attack.

For those that don’t have tickets yet, a pack of four adult tickets in the black category seating has been discounted to $100 (plus booking fee). That’s a saving of nearly $16 on each ticket. To secure your seats NOW, click here . (for the discounted four-ticket pack use the PASSWORD bignight when prompted)

On Sunday, the Roar Women’s Westfield W-League game against Adelaide United will be played at Cleveland Showgrounds.

Roar teams have played at the ground several times in recent months as the club continues its engagement with local communities across the state.

The match will kick off at 2pm to allow Adelaide United to make their return flight that evening. Admission is $10 adults and $5 (children and concessions).