Improvement is key for Young Roar

Brisbane Roar Youth coach Josh McCloughan believes his current crop of young players will help to further reinforce the talent pathways from PlayStation 4 NPLQLD clubs to the Foxtel National Youth League and beyond.

His new-look squad includes Harrison Sawyer from Western Pride (and Peninsula Power before that) and Joseph Champness from Premiers Moreton Bay United.

“We are a work in progress as we’ve only been together a short time,” McCloughan said of his team’s first-up effort.

“It’s going to take us a while to get in the direction we want to but there were some good signs from people early.”

McCloughan said PS4NPL clubs had an important and ongoing role to play in ensuring a strong Foxtel NYL and a progression of home-grown players into the Hyundai A-League ranks.

“We are always looking to them for the next generation of top young players,” he said.

“The Roar need their increasing support. We know how much hard work goes into their sides and player development and we hope to continue on from that process and take talented young players to the next level.” 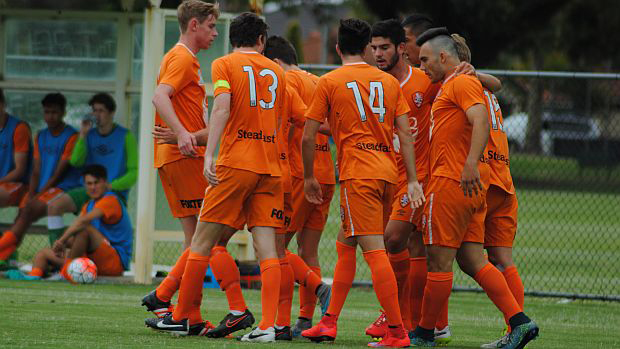 McCloughan has repeatedly said he wants his squad’s motivation in the Foxtel NYL to be about performance not results.

He has urged his players (pictured above) to build on last weekend’s performance when they take on Melbourne Victory Youth at Cleveland Showgrounds on Saturday (3pm kick off).

“The message is always clear, right across the board. We are not there to waste any moments,” McCloughan said.

“Every day is a chance to improve and this weekend against Victory will be no different.

“All the boys that came in (to last weekend’s squad) acquitted themselves reasonably well and they will be looking to improve from last week.”