The curtain may have come down on the Hyundai A-League 2014/15 season last Sunday, but it’s business as usual for the Brisbane Roar players as they prepare for their LFP World Challenge game against Spanish La Liga side Villarreal CF at Suncorp Stadium on Wednesday, 3 June.

After a few days off last week, the Roar squad will have completed six sessions by the end of this week as they build towards peak condition again for the showcase game against the high-achieving Villarreal, who continue to defy their small city roots in 16 seasons in the Spain’s premier competition.

And few Roar players are as eager to get on the field against the Spaniards as midfielder Steven Lustica.

Lustica was the Roar third-highest scorer in the Hyundai A-League this season. He netted five goals, including a hat-trick at Suncorp Stadium against Central Coast Mariners, who wear a strip not that different to the yellow one worn by Villarreal, who are known in Spain as El Submarino Amarillo or the Yellow Submarine.

Lustica had limited opportunities in the closing weeks of the season and continues to train hard as he attempts to stake a claim for selection in the Starting XI against the Spaniards.

“I’ve always been the type of player who does extra sessions on my day off or stays behind after training. I want to improve my game,” Lustica said.

“There’s little things I work on, whether that’s shooting or little bit of extra fitness or going to the gym.

“I always make sure I do that little bit more that might give me an extra edge so when I do get my chance I am 100 per cent ready and 100 per cent fit.”

Lustica said the Roar players were determined to put on an entertaining performance for the club’s fans after the disappointing end to the season in the Hyundai A-League and AFC Champions League.

“It is going to be a big opportunity for all of us to showcase ourselves against a quality team. They are a top team in Spain’s La Liga which is one of the best leagues in the world,” Lustica said.

“We are excited for the game. They obviously have got some quality players and they are just finishing their season so they are going to be in peak condition. It will be a perfect situation for us to see where we are against a quality team from Europe.” 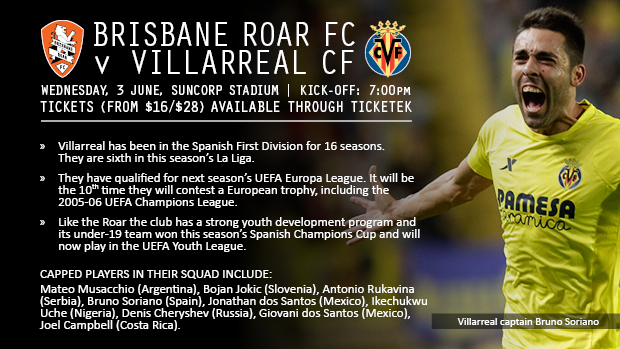 Lustica said the tempo at training this week had continued to be upbeat despite the Roar battling through a long and challenging season.

“We are all fully motivated and we know we have to get the most out these last few weeks coming up to this game,” he said.

“We have got a lot of good leaders in the team who pull everyone together and make sure everyone is on top of their game and training well.

“It is just like we are in season at the moment, nothing has changed. Everyone is still pushing themselves and trying to improve which is great.”

Lustica said it was still too early to speculate on the Roar’s Starting XI against Villarreal but the squad was boosted today by the return to full training of defenders Luke DeVere (thigh muscle) and Shane Stefanutto (calf muscle).

Lustica said his immediate aim was to make the most of any chance that might come his way against the Spaniards.

“I thought I had some pretty solid games especially towards the end of the season. It was positive for me to know that I could put in good performances like that,” he said.

“I think I did well in the games I got and I am looking forward to this game and next season and building on that and getting consistent game time next season.”

Tickets to Brisbane Roar versus Villarreal at Suncorp Stadium on Wednesday, 3 June, start from just $16 for kids and $28 for adults (plus credit card and transaction fees). For more information or to book tickets click here.

Roar Memberships for next season are also now available at the same prices as last season!

Go to www.RoarMemberships.com.au  to take advantage of this great offer through our fast and easy booking system.

Current Roar members who want to secure the same preferred seats in season 2015/16 as they had at Suncorp Stadium this year have until 9am, Monday, 13 July, 2015, to renew their Roar memberships.

Memberships can be secured with a deposit of just $25.