As Roar striker Jamie Maclaren celebrates his birthday today, the 22-year-old has a clear target for the year ahead.

“I’ll be working very hard this year to put the ball in the back of the net,” Maclaren said as he prepared to celebrate his first birthday since his off-season move from Perth Glory to the Roar.

“Brisbane Roar has had a lot of good goal scorers over the years and hopefully I can add to that and help the team be successful again.”

It is a huge year ahead for Maclaren.

Not only will he be attempting to make his mark with the Roar, he also will help spearhead Australia’s challenge to qualify for the football competition at next year’s Rio Olympics.

The Under-23 Olyroos must finish third or better at the Asian Football Confederation qualifying tournament in Qatar in January.

“Getting the Olyroos to Brazil is a big target for me personally and one that is also very important to the code in Australia,” Maclaren said.

“We’ve got a few camps coming up and I’m going to miss some (Hyundai A-League) games this season but if we qualify for Rio it will be great.

“Every kid in Australia will see that if they play football they can get to an Olympics. You can’t do that with a lot of other sports.” 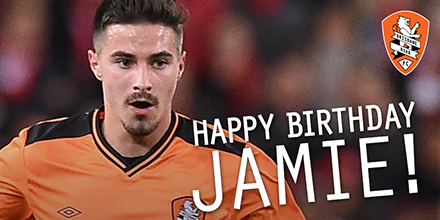 “I knew a couple of the Roar boys already and John (Aloisi) and Craig (Moore) were very welcoming to me. It was an easy environment to slip into,” he said.

“Training has been really good. I had a fair bit to catch up on but that is part of pre-season. I feel like I am nearly at my fittest and just enjoying my time now.”

Maclaren made his debut for the Roar in the recent friendly match against Liverpool FC. He was marked by the Reds’ Slovak international Martin Skrtel.

“There were a few challenges between me and Skrtel which was great,” Maclaren said.

“You see this guy playing week in week out in the EPL and to be out there alongside him was inspiring.

“Luckily I got his shirt after the game and it will always a terrific memory that I played in front of 52,000 against one of the best teams in the world.”