A double from 20-year-old young gun Brandon Borrello helped Brisbane Roar FC to a 3-0 victory over Adelaide United FC at Suncorp Stadium and kept John Aloisi’s side on pace with the Hyundai A-League ladder leaders.

With Socceroos head coach Ange Postecoglou watching, the Roar scored in the ninth minute and withstood some sustained pressure after half-time before securing the three points from the fourth round match with two late goals.

The victory put the Roar second on the ladder (with remaining Round 4 games to come), one point behind Sydney FC, their opponents at Allianz Stadium next Friday.

Man of the match Matt McKay was instrumental in the middle of the park and set up multiple chances for his side . He also kept Adelaide danger man Marcelo Carrusca quiet for much of the match.

Borrello’s first goal game in the ninth minute and was a tap in from close range thanks to some brilliant passing and quick thinking from McKay and Thomas Broich. 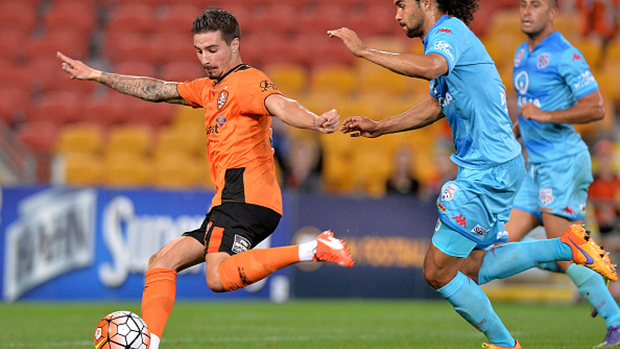 The Roar had the better of the first stanza with McKay and Corona dictating terms.

Adelaide asserted more pressure in the second half as midfielders James Jeggo and Carrusca pushed further forward, but they weren’t able to capitalise and several good opportunities.

Roar keeper Jamie Young made a brilliant one-handed save in the 57th minute, with the score still 1-0, which proved a turning point in the match.

As an increasingly desperate Adelaide pushed forward seeking an equaliser, the Roar punished the visitors with Jamie Maclaren (above) scoring in the 79th minute with a spectacular solo effort before Borrello netted his second in the 92nd minute, latching on to a superb pass from McKay.

It was his fourth goal in four rounds in a brilliant start to the season.

The game also marked the return of defender Shane Stefanutto, whose experience helped the Roar to their first clean sheet in 13 matches, dating to March earlier this year.

9′: Matt McKay plays a glorious cross-field ball to Thomas Broich on the left. The German shows great skill to first time as low ball across the Adelaide United goal. Jamie Maclaren has a crack but his attempt is blocked and it ricochets to Brandon Borrello who side- foots in from 12m. 1-0

79′: After hitting the woodwork in the 63rd minute, Jamie Maclaren took the ball on the right, tied Adelaide left back Tarek Elrich in knots and then cut back to create space inside the box. He then used his left foot to gloriously curl a shot into the far corner of the goal well beyond the arms of outstretched Reds keeper John Hall. 2-0

90+2′: Man of the match Matt McKay was superb all night. His cross-field pass led to the first goal and his assist for the Roar’s third was just as spectacular. The midfielder carried the ball deep in the Reds’ half and saw Brandon Borrello in line with the flat Adelaide defence and ready to pull the trigger. McKay slotted a pinpoint pass through the defenders for Borrello to run onto and flick into the Adelaide net. 3-0

Brisbane Roar Head Coach John Aloisi: “We’ve got dangerous players going forward. We took our chances but we also created quite a few opportunities as well.

“I’m a very lucky guy to have two great goalkeepers . . . Jamie Young that one on one save that he flicked over the bar that kept us in the lead.”

“I spoke about Brandon (Borrello) earlier this year, I think he’s got goals in him . . . if he keeps persisting and making those runs he will hurt opposition. It wasn’t just his pace that hurt them tonight it was also the timing of his runs. That last goal, his timing was perfect.”

“There was a lot of talk about our defence this week . . . they dug in deep when they had to . . . as a defender clean sheets are just as important as goals for attackers.”

Roar captain Matt McKay: “It’s a good start to the season for us . . . but there’s still room for improvement.”

The Roar defence had been in the spotlight all week and they answered emphatically with a clean sheet, helped in no small part by a spectacular one-handed save by keeper Jamie Young in the 57th minute off Sergio Cirio when the score was still 1-0.

It’s a short turnaround for the boys who head to Allianz Stadium on Friday to take on Sydney FC. It will be interesting to see what mind games Sky Blues Head Coach Graham Arnold initiates in the coming days. 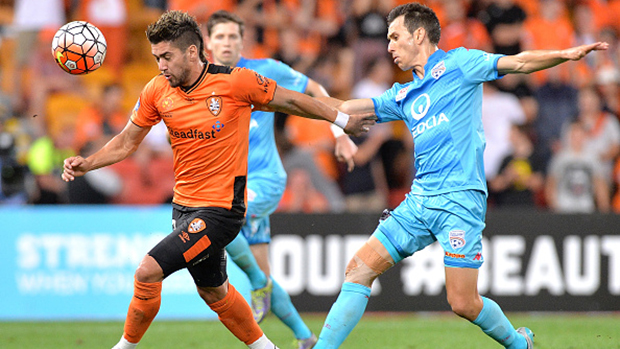