Two early goals allowed the Brisbane Roar Women to collect all three points against reigning Champions Canberra United in the opening round of the Westfield W-League at Suncorp Stadium today.

In a rematch of the 2009 Grand Final, the game was won and fought in the midfield with the Roar’s Westfield Matilda Katrina Gorry named player of the match after a tireless display that showed why she is one of the best players in the Westfield W-League.

After missing the finals for the first time last season, Brisbane were back to their best today.

Attackers Amy Chapman (below), Emily Gielnik and Alisha Foote were a menace up front for the Canberra defence and their goalkeeper, Lydia Williams.

Westfield Matilda Tameka Butt opened the scoring for the Roar after just nine minutes with a solo run into the box and a neat finish.

With a goal up, the Roar Women were steered by fellow Matilda Katrina Gorry who showsed her suprb early season fitness to run the Canberra midfield for much of the game and helped set up several goal-scoring opportunities.

The Roar added a second goal two minutes after Butt’s opener when Williams fumbled a Ruth Blackburn shot into her own net. 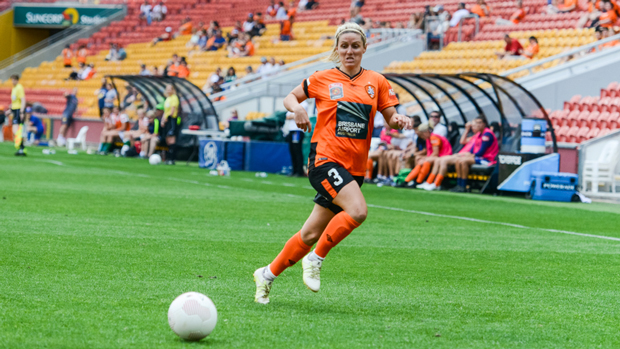 The visitors pulled one back just before half time when striker Michelle Heyman scored her 51st W-League goal, cementing her status as the all-time leading Westfield W-League goal scorer.

Both Canberra and the Roar had ample opportunities to the seal the game in the second half.

However, new Roar keeper Haley Kopmeyer, on loan from Seattle Reign, provided a steadying influence at the back and was able to fend off any Canberra comeback while Williams atoned for her first-half mistake by repelling several one-on-one chances against Roar attackers.

In a further boost for Brisbane, the young Roar players (the club added 10 new players to its roster this season) showed they were up to Westfield W-league standard and can handle the demands of competing alongside some of the best players in the world.

9’ Tameka Butt beat several defenders to sink a looping shot freom inside the box into the left-hand side of the goal.

11’ Ruth Blackburn heel kicks the ball and it falls into the back of the net after a fumble from Lydia Williams.

39’ Michelle Heyman kicks the ball into the back of the net after Hayley Kopmeyer tried to come out and collect the ball.

Seattle Reign signing, Hayley Kopmeyer will be a huge asset to the Roar despite conceding a goal today.

Roar Women coach Belinda Wilson: “It went to plan and we had a plan to play. We let them get into the game and fixed a few things at half time. We created a lot of opportunities.”

When asked about losing three players to the Matilda’s tour: “We won’t have a problem. We knew about it. They [other players] will be able to fulfil the roles and step up.”

Roar Women captain Clare Polkinghorne: “Very proud of the girls. A big challenge for the girls making their first appearance for the Roar playing the reigning champions at Suncorp Stadium.”

“We started well with two goals in the first 10 mins and we started really well for us. I think we handled the occasion very well to come away with the points.”

Roar goalkeeper Haley Kopmeyer: “I had very little idea of what to expect. I think for my first game and having first game nerves I think I played well.”

“A lot of positives and we are hoping to show what this team is about.”

Roar’s player of the match Katrina Gorry: “The first goal was exactly what we had been working on in training.”

“There’s definitely a new culture in the team.”

It’s a trip down to Western Sydney for Roar women next but it will be hard to face Wanderers after losing three players to the Matilda’s tour in China. 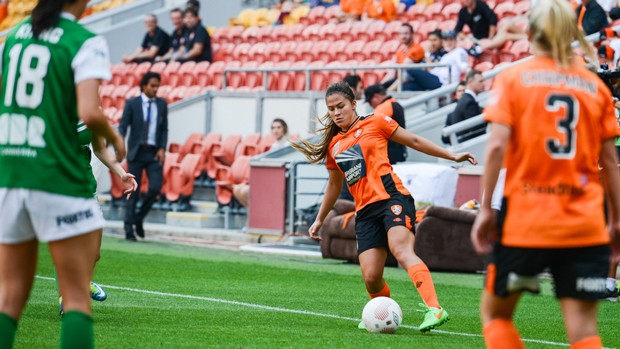