Club leading goal-scorer Nick D’Agostino opened the scoring with the game’s first chance, shooting on the turn and firing home a bullet from 15m to put the home side in front after nine minutes.

Buoyed by a strong breeze, the Young Roar took charge of first-half proceedings and doubled their advantage through Jayden Prasad late in the opening stanza.

Playing with the wind behind them in the second half, Redlands United maintained a majority of territory and their dominance paid dividends on the scoreboard when substitute Graham Fyfe fired home from a set piece with 20 minutes to play.

The final 15 minutes was played predominately in the Young Roar’s half, but Redlands couldn’t find an equalising goal.

A foul in the area on Nick D’Agostino in the shadow of full-time allowed the Young Roar striker to score his second goal for the game from the penalty spot and restore Brisbane’s two goal advantage, a lead they would maintain until the final whistle. 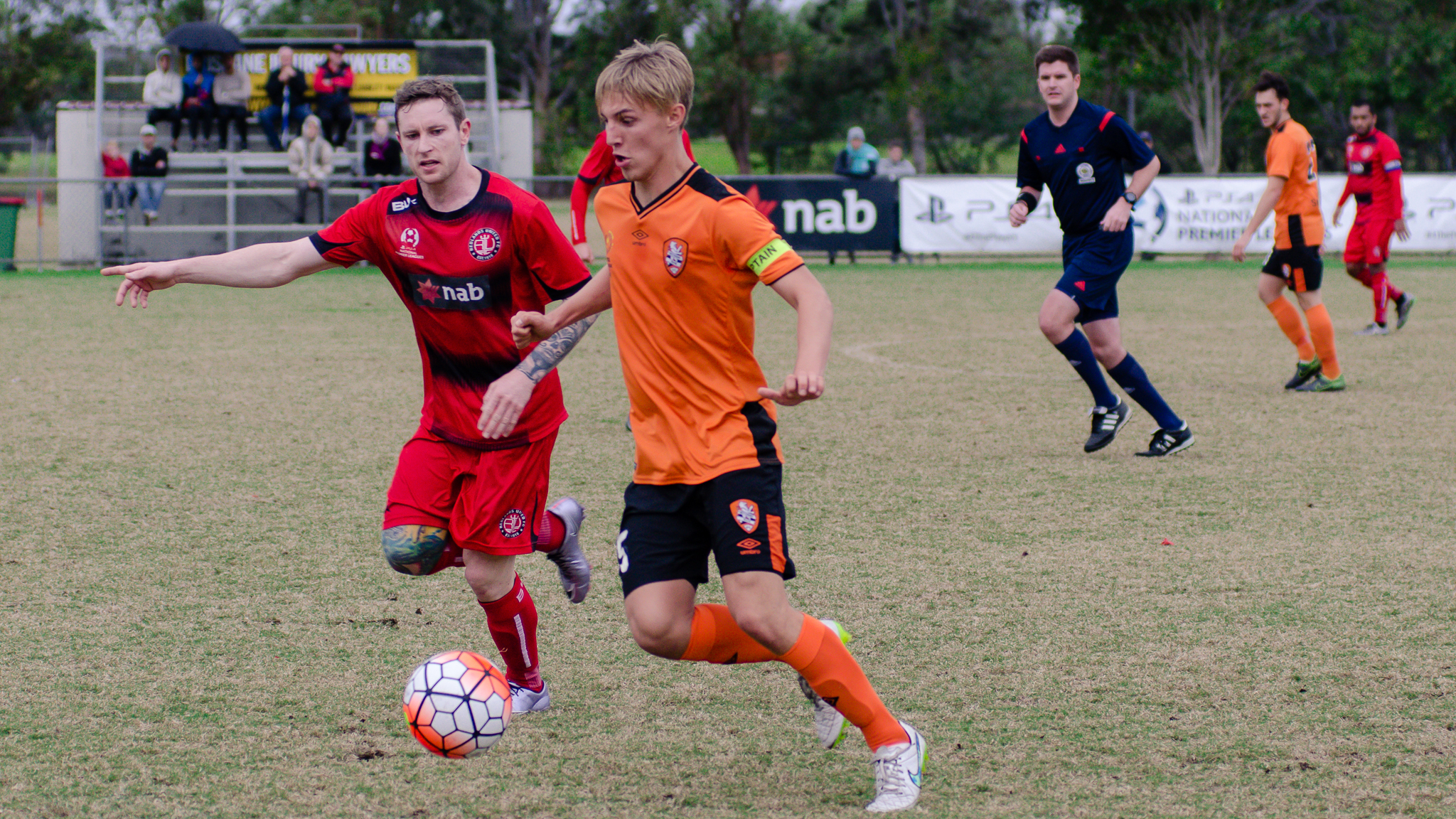 9′: GOAL ROAR: Jayden Prasad’s flick-on at the near post from a Roar corner sees the ball drop next to the penalty spot. Nick D’Agostino is first on the scene, shoots on the turn and buries a bullet into the bottom corner. 1-0

23′: YELLOW CARD REDLANDS : Grant Brix and D’Agostino race for the loose ball and D’Agostino wins the race before the imminent contact earns Brix a yellow card.

32′: CHANCE ROAR: Jesse Daley’s cross from the right wing finds its way through a crowd inside the area to Aaron Reardon at the back post whose second-touch volley at goal flies high.

39′: GOAL ROAR: Young Roar go short from the corner and Daley’s low volley creates havoc in the area. The ball squeezes through to Prasad at the back post who taps in from 5m. 2-0

60′: CHANCE ROAR: A barnstorming run from inside his own-half from Connor O’Toole ends with D’Agostino drilling a shot from the edge of the area into the arms of Jonathon Burrowes.

69′: YELLOW CARD ROAR: Tomislav Bilic comes off his line in an attempt to beat Michael Mcgowan to the ball but fouls the Redlands’ defender in the process and receives a caution.

71′: GOAL REDLANDS : Graham Fyfe shoots from a free-kick awarded inside inside the D. His low shot isn’t blocked by a large wall from the Young Roar and it finds the back of the net off the right upright. 2-1

79′: CHANCE REDLANDS: Kai Halliday has a shot on the turn from 10m. Bilic sees the ball late through a sea of legs but manages to save.

80′: CHANCE ROAR : A penetrating run into the penalty box from Dane Ingham ends with a strong save from Burrows to keep out a low shot from the Roar winger.

84′: CHANCE REDLANDS : Igor Sao Jose manages to twist his body and shoots first-time from the top of the box but can’t keep his shot down.

89′: GOAL ROAR: Nick D’Agostino scores his second goal of the match from the penalty spot following a foul from Adam Chandler.  3-1

Brisbane Roar Youth Coach JOSH MCCLOUGHAN : “Redlands [United] are a good side and in the second half they were always going to come back firing because I thought we dominated the first half.

“Today was also a bit of a grind and I was really proud that they dug in.

“It’s part of their development. One part is playing and the other is learning that sometimes you had to pull together and grind and get something out of the football.

“We didn’t want to concede. We copped a set piece and that happens but I thought the response from that was really good.

“We’re starting to take the half chances that we’re getting and we’re not concerned about anyone. We’ll just keep playing whoever is in front of us and keep pushing to improve.”

Redlands United Coach MATT CHANDLER : “I thought the [Brisbane] Roar were very good today. We were below par on where we have been.

“We’ll return to that once we get the players back from injury.

“We don’t have anything really specific to work on, just maybe having bit more game intelligence. Just in certain sections of the game I thought we showed a little naivety. 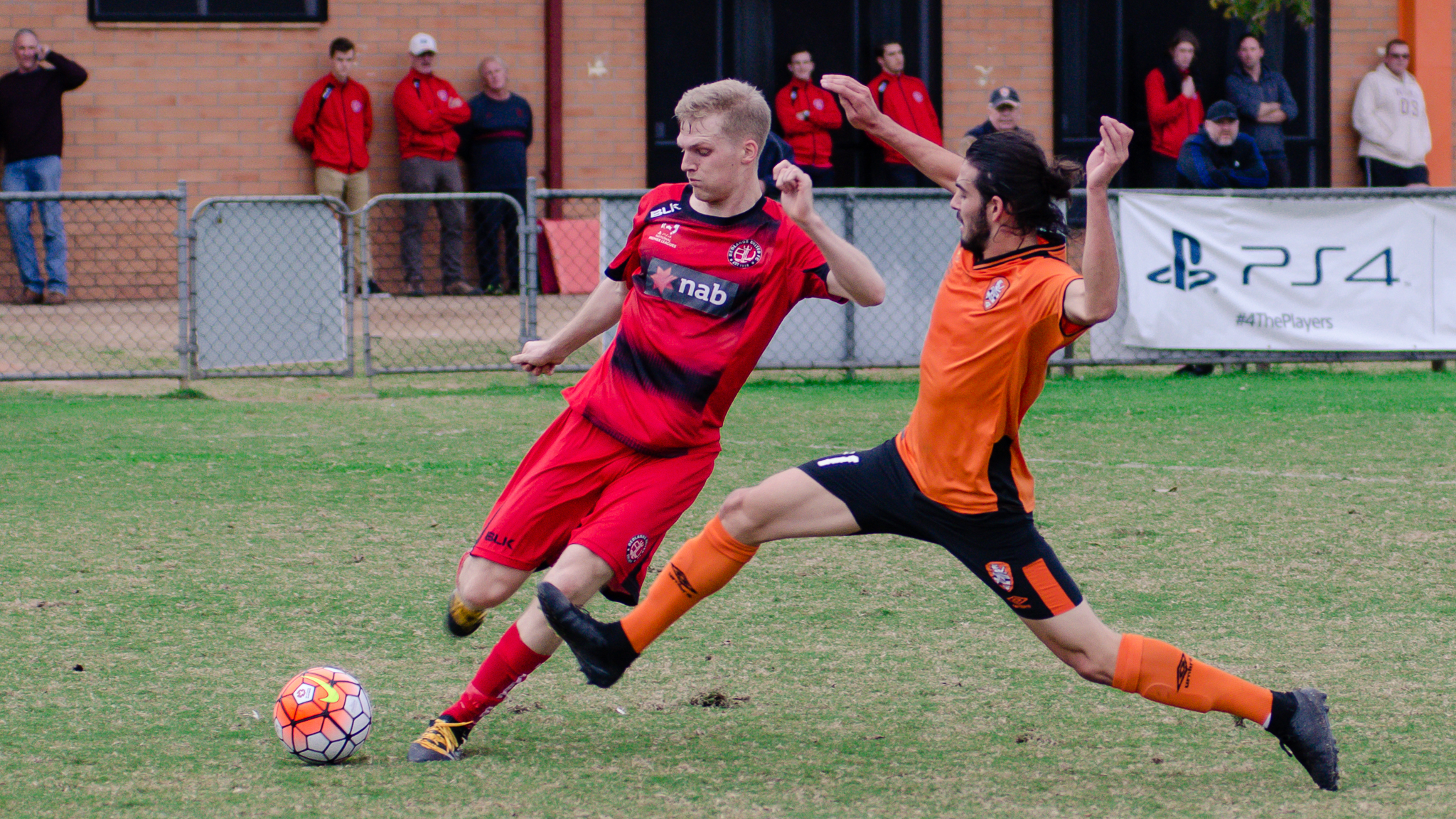 Nicholas D’Agostino is in fine form in front of goals. The potent striker has now reached double figures in terms of goals scored in the 2016 PS4 NPL QLD after scoring four goals in his last two games.