Brisbane Roar will enter the Hyundai A-League 2016/17 season with back-to-back wins following a 3-1 victory against PS4 NPL QLD U23 Select on Saturday afternoon.

Two goals for last season’s leading goal scorer Jamie Maclaren, and a second goal in a week for midfield maestro Thomas Broich secured the victory against the NPL’s best Under 23 players.

The Roar now turn their focus to the Hyundai A-League season opener against Melbourne Victory on Friday, 7 October. Tickets are available to purchase HERE.

Head Coach John Aloisi says there are plenty of positives to take from the 3-1 win – the Roar’s second in the space of four days.

“The boys haven’t had a short turnaround like this during this pre-season so it was demanding on their bodies but that’s what we need,” Aloisi said.

“It was good to see Jamie [Maclaren] on the scoresheet with two goals and Thomas [Broich] scoring again too.

“Dimi [Petratos] was causing issues for the opposition. There were a lot of positives from today’s game.”

The Roar controlled proceedings from kick-off, creating regular chances and dominating possession throughout the 90 minutes.

Thomas Broich (below) opened the scoring after 24 minutes with a thunderous header, assisted by a Petratos corner before Jamie Maclaren finished off a precise build-up play between Petratos and Holman to double the Roar’s advantage 11 minutes later. 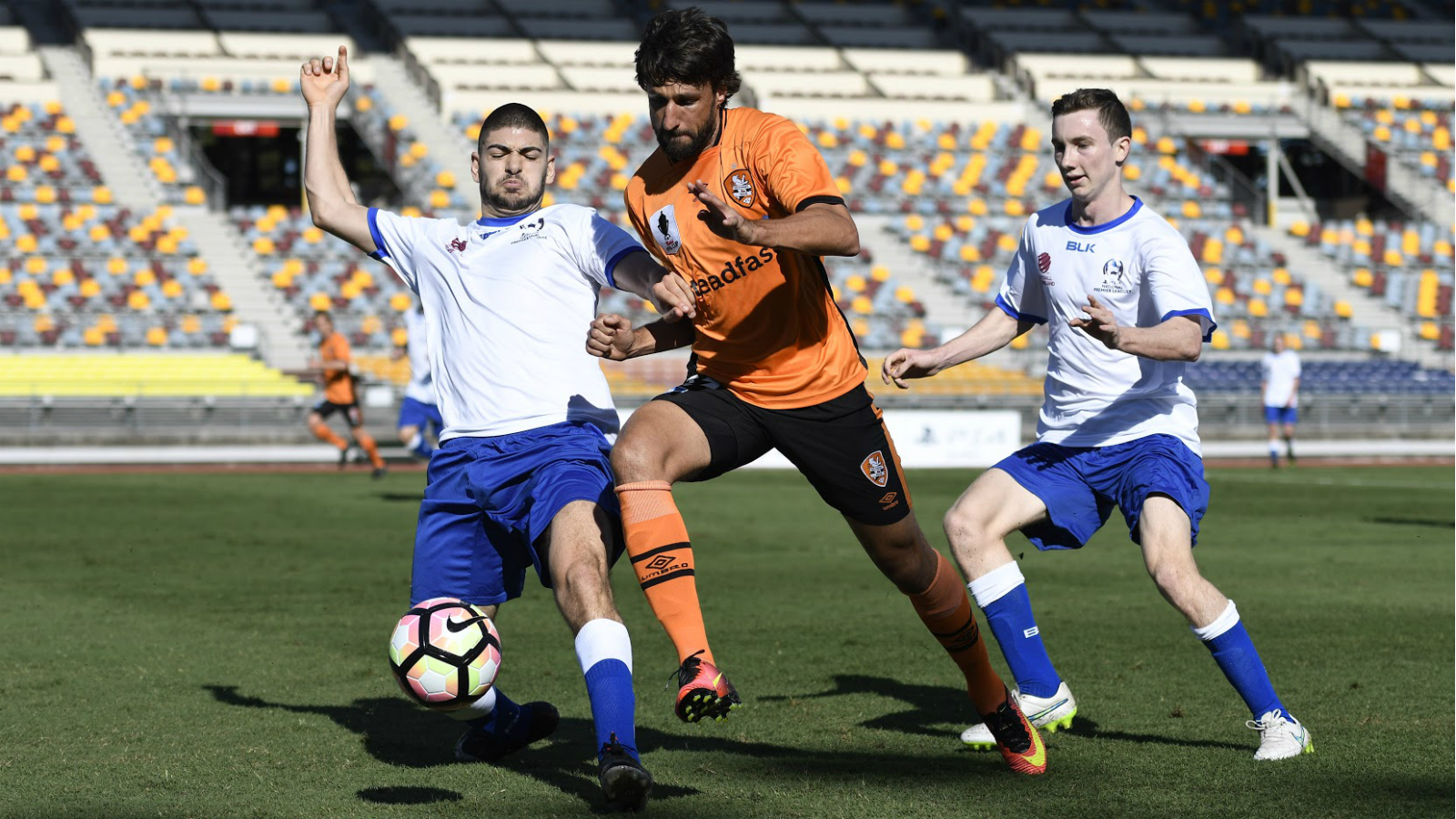 Just before the hour mark the NPL Select breathed life in to the contest with a well taken goal to Joe Duckworth.

NPL Select continued to press high and minimise space for the Roar, before Maclaren restored the Roar’s two-goal advantage in the final 10 minutes of the second half.

Brisbane’s attacking trio of Jamie Maclaren, Brett Holman and Dimitri Petratos were amongst the Roar’s best and provided the Roar faithful with reason for optimism for the upcoming Hyundai A-League season

Holman showed glimpses of the skill that earned him 63 Socceroos caps in his first minutes in Orange. His pin-point passing and ability to create space caused issues for the NPL Select throughout his 45 minutes on the pitch as well as capping off his Roar debut with an assist for the Roar’s second goal.

Dimitri Petratos was at his elusive best throughout the encounter and played a pivotal role in attack for Brisbane, coming close to adding to his first-half assist on numerous occasions throughout the second half.

Luke DeVere played a full 90 minutes partnering strongly with Jade North and Daniel Bowles in the centre of defense. The Roar back four were rarely threatened with strong performances in the centre of midfield from Matt McKay and Jacob Pepper.

Brisbane were able to draw on their young talent during the second half with Young Roar players Nathan Konstandopoulos, Mark Rodic and Aaron Reardon playing a role during the final 45 minutes. 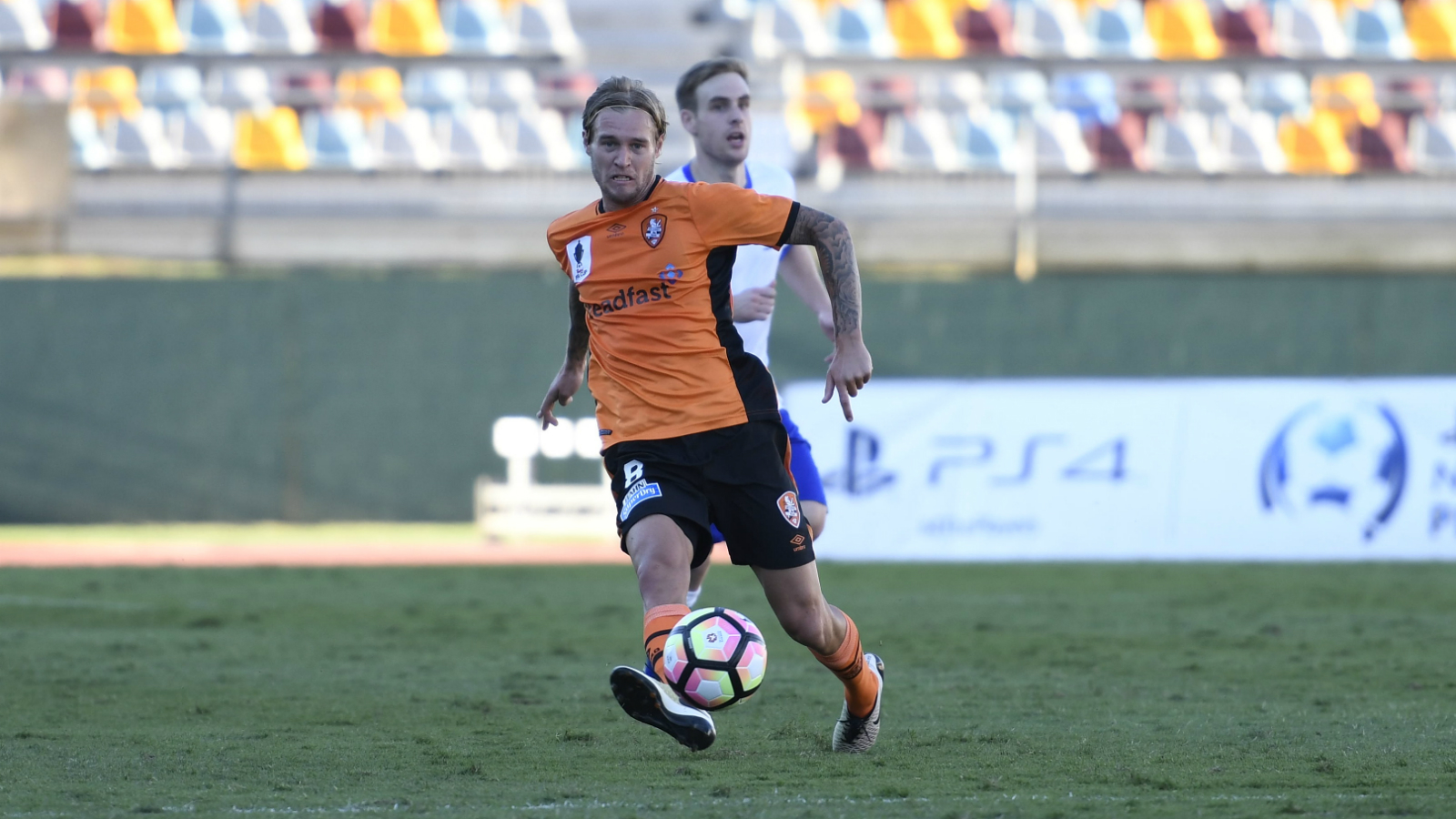 20’: CHANCE ROAR : Great lead up play between Brett Holman and Dimitri Petratos allows Petratos to find space at the top of the area but he slides his shot wide of the left post.

24’: CHANCE ROAR: Terrific turn and pass inside the opposition 18 yard box from McKay who creates space for Jamie Maclaren to shoot from an acute angle. Brisbane’s number nine draws a save from Shane Viitakangas before the ball deflects behind off a defender for a Roar corner.

24’: GOAL ROAR: Petratos floats a corner to the top of the six-yard area where Thomas Broich rises unopposed and thunders a header into the roof of the net. 1-0

35’: GOAL ROAR: Petratos plays Holman in behind the NPL Select defence before the number 10 cuts back to the goal mouth where Maclaren coolly slides home the Roar’s second from close range. 2-0

39’: CHANCE ROAR: Holman and Petratos link up yet again before Petratos fires high with a thunderous attempt from the edge of the area

56: CHANCE ROAR : Broich has a long-range attempt which is tipped behind for a corner via the crossbar.

58’: GOAL NPL SELECT: NPL Select break on the counter through Finn Beakhurst. Beakhurts finds Cronin at the top of the area who then plays Joe Duckworth in behind the Roar defence before Duckworth finishes low across across the face. 2-1

66’: CHANCE ROAR: Petratos finds space down the right wing and plays an inch-perfect ball into the middle where Maclaren’s first-time shot flies narrowly wide of the right post.

66’: CHANCE ROAR: A scramble in the area ends with Jacob Pepper lashing out and firing towards goal forcing a terrific reaction save from Samuel Nickolls.

83’: GOAL ROAR: Kai Halliday’s attempted intercept is shinned onto the post and back into play before falling to the feet of Jamie Maclaren for a simple tap-in. 3-1

90’: CHANCE ROAR: Nickolls comes out to stop Maclaren on the attack and leaves his goal unguarded. Maclaren collects himself and shoots towards an empty net, only stopped by a last-gasp challenge from Kai Halliday. 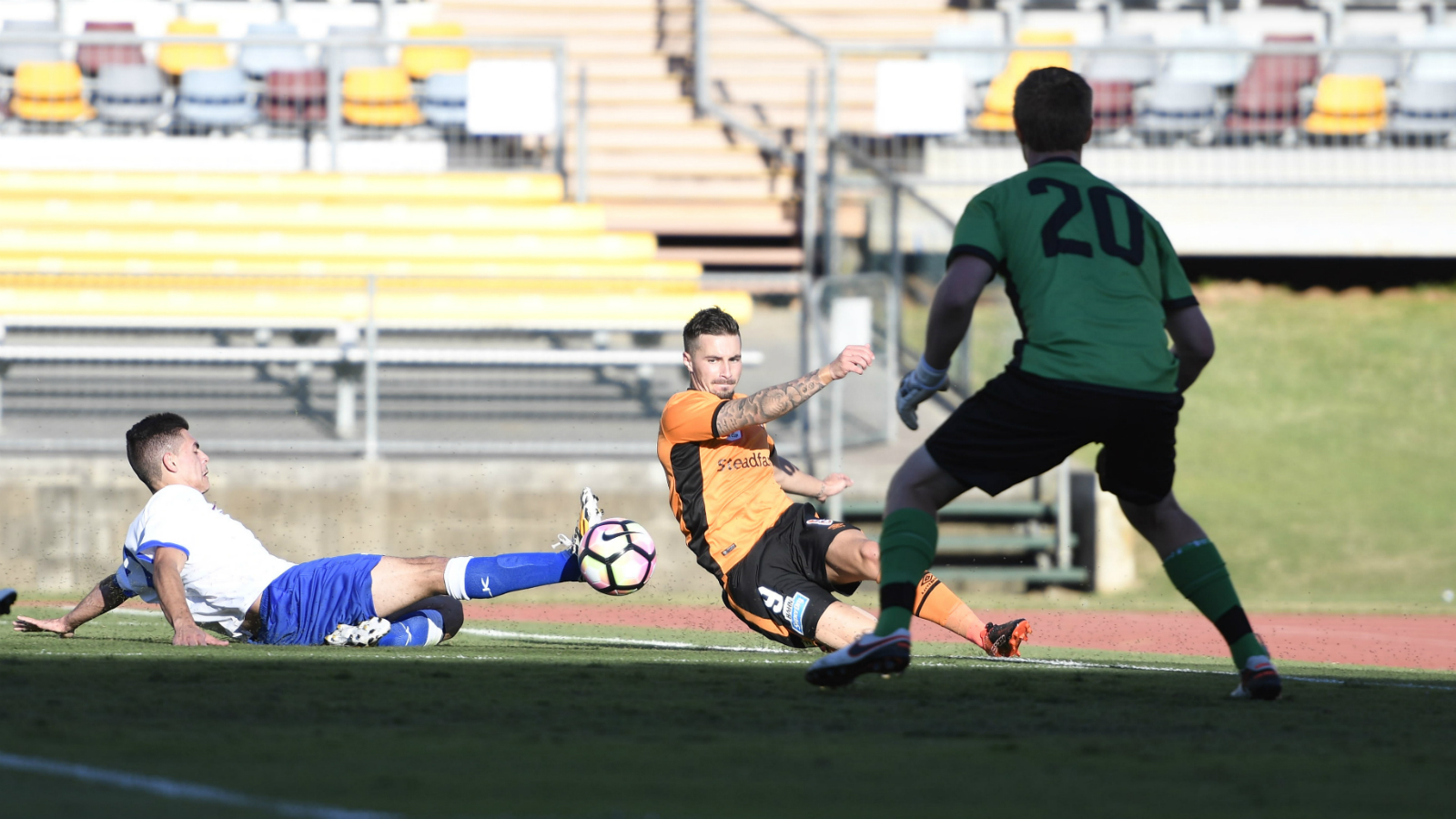 The next time our boys in orange play, it will be for points! 13 days remain until the Hyundai A-League 2016/17 season opener on Friday, 7 October at Suncorp Stadium (6:50pm kick-off) against Melbourne Victory.

Brisbane Roar Head Coach JOHN ALOISI: “It was a tough test for us because they set up well and made it difficult for us.

“Once we figured out their plan we began to create opportunities in the first half.

“The Second half wasn’t as fluid. It’s understandable at this time of the season, but that are a lot of positives to take from that game.

“Another 90 minutes for Luke DeVere is great especially with a short turnaround after the game against Perth on Tuesday and it was a good opportunity to see some players a little bit out of position and it was a good test.”

On Brett Holman: “He’s going to be really good for us when he gets his match fitness up and match rhythm working. He has an eye for goal but also is able to play that last pass and when he loses the ball he regains it quickly.

“Because he’s playing just behind the strikers, he is roaming a bit more so we just need to be aware in midfield of each other’s positioning. The more that Brett plays with the group, the more they’ll understand his movements.” 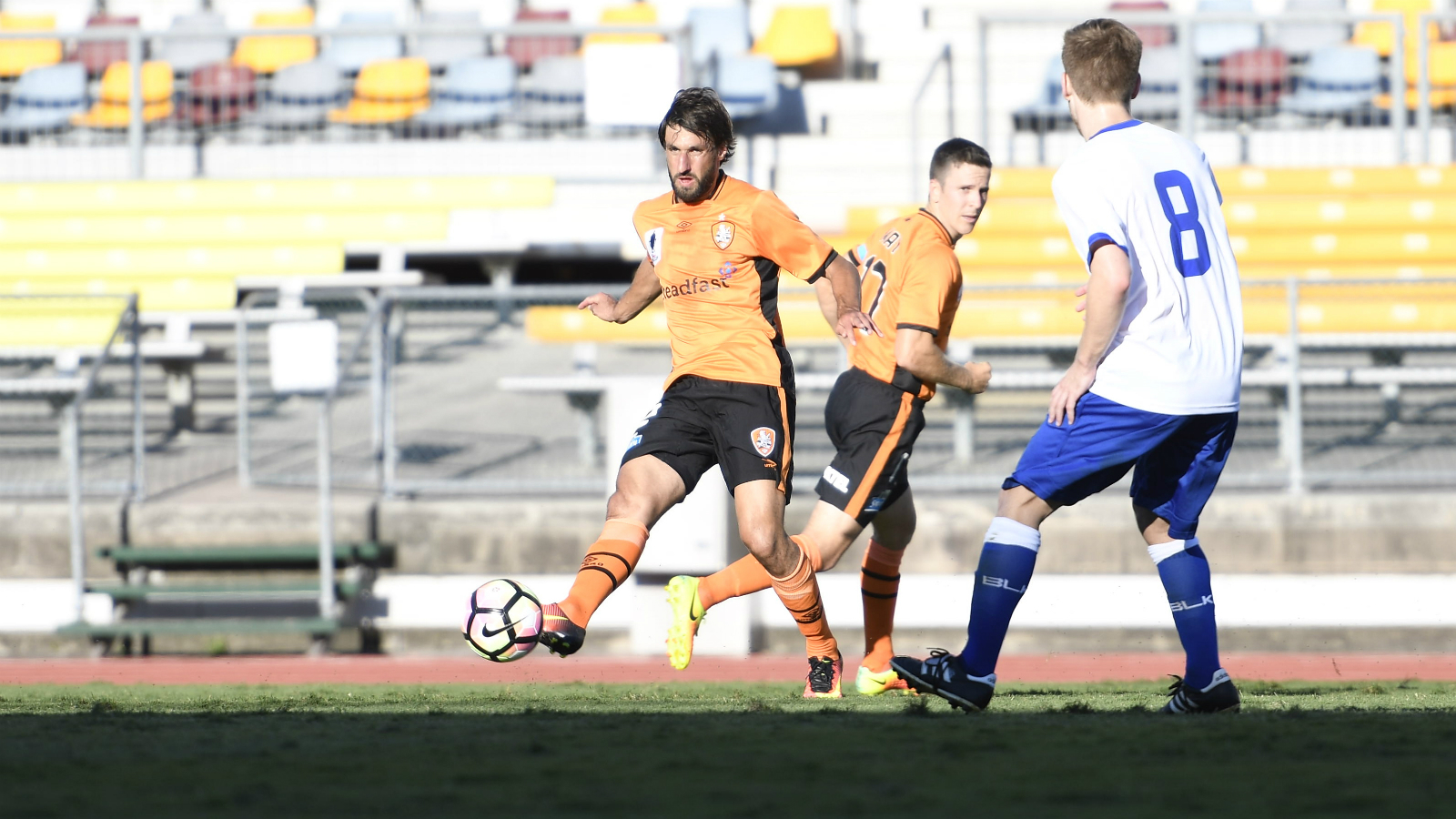