It was an epic Semi-Final – and arguably one of the finest Hyundai A-League matches ever played – but Brisbane Roar’s 2015/16 season is over after a pulsating 5-4 extra-time loss to Western Sydney Wanderers.

In a match that had everything, including another late Roar comeback to level at 4-4, Brisbane in the end just couldn’t find one last moment of magic to keep alive their amazing turnaround season.

The opening 23 minutes were beyond what any Roar fan could have imagined.

The Wanderers started strongly, as expected, and dominated possession but suddenly a penalty, an own goal and some Jamie Maclaren magic had Brisbane 3-0 up and seemingly one foot on the plane to Adelaide for next weekend’s Grand Final.

But football is a funny game.

Within 15 minutes the Wanderers had clawed back two goals in went into the break with a sniff of more to come.

And so it proved to be. Eight minutes after the re-start the home side was back on levels terms and six minutes later were ahead.

The never-say-die Roar were not done though. 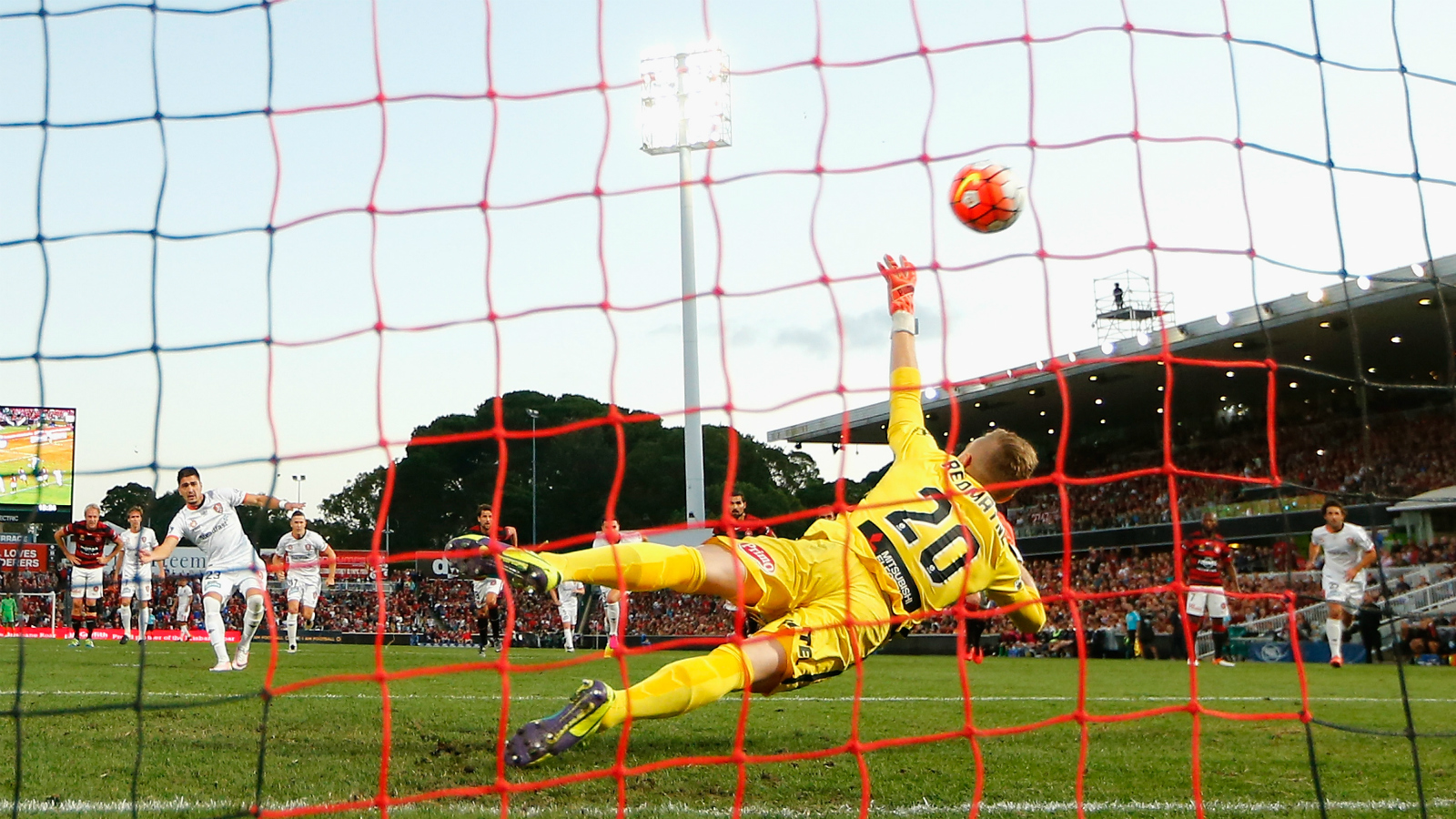 Corona launched a move that included Javier Hervas, Tommy Oar and Henrique before the Slippery Fish squared across the goal for Maclaren to tap into an open net to make in 4-4.

After being on the back-foot for so long, the Roar pushed forward repeatedly but couldn’t conjure another late winner and the match went to extra time.

As fatigue set in, the Roar players continued to battle and none so more than keeper Jamie Young who had made several key saves in normal time and put his body on the line again in extra time.

But in the 102st minute, luck would go against him after he brilliantly saved a shot from Shannon Cole but the ball ran wide to Mark Bridge.

The Western Sydney striker snapped a quick cross back into the six-yard box where former Roar player Dario Vidosic was on hand to side-foot into the net for a winner and a Grand Final berth for the Wanderers against Premiers Adelaide United.

An amazing game. Not the ending Roar fans had hoped for but a season in which pride had been restored in the Orange. 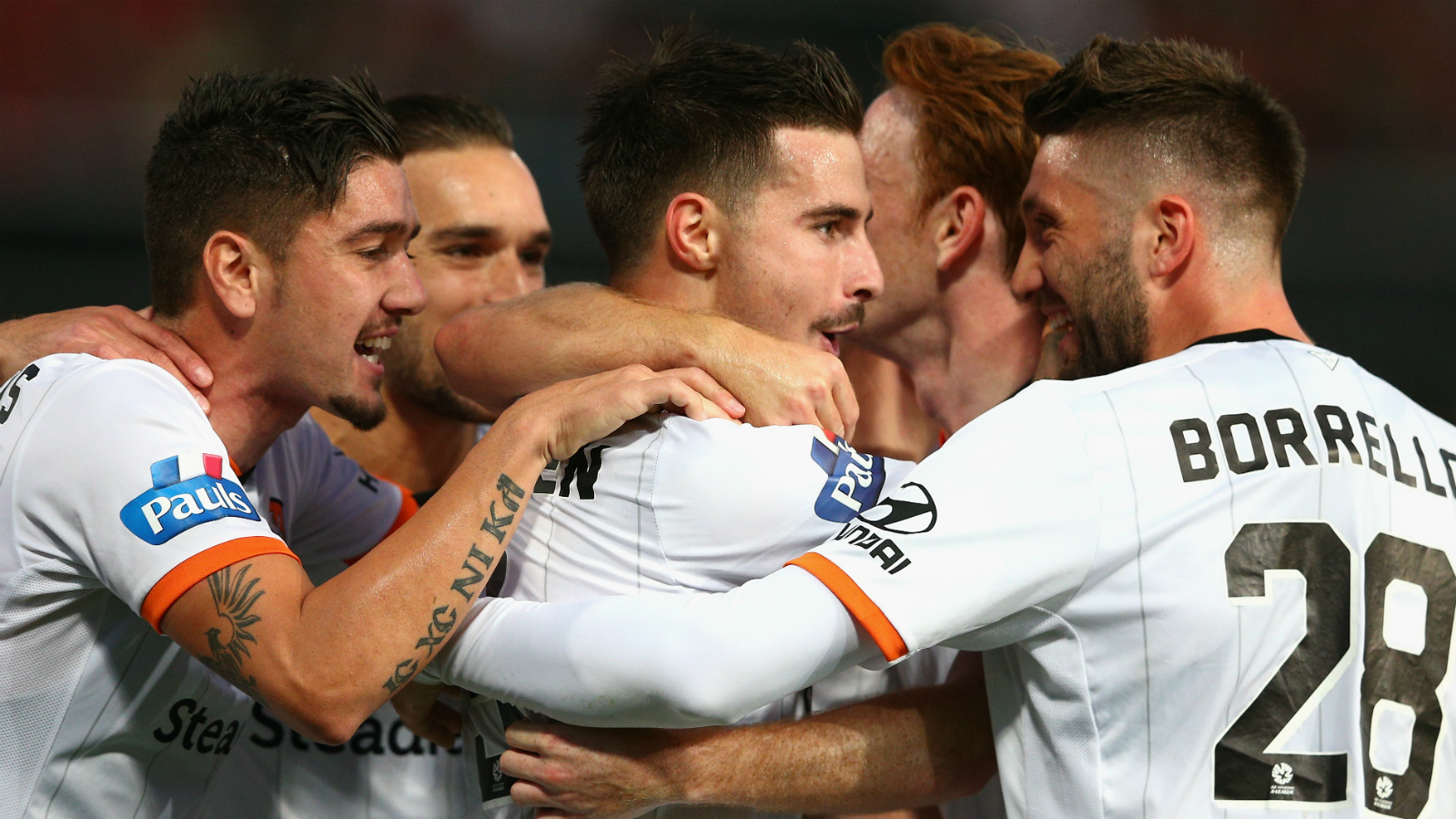 16′: It was a corner that came in unexpected circumstance when Brendon Santalab blasted a clearing tackle over his back-line from the halfway mark during a period of Wanderers domination. Corona whipped it in to the near post towards Thomas Broich and Andreu clearly handled as he tried to out-jump the German. With regular penalty taker Henrique still on the bench, Dimitri Petratos stood up and expertly converted the spot kick hard, high and left past Wanderers keeper Andrew Redmayne. 1-0

20′: A Corona free-kick from 25m on the left hits Andreu on the backside and ricochets into the Wanderers goal. 2-0

23′: Jamie Maclaren pounces after the Wanderers defence allows the ball to bounce inside the penalty box. The Roar No.9 hits a shot that takes a deflection and loops over the Wanderers keeper and into the net. 3-0

26′: Jade North concedes a free-kick and earns a yellow card for a tackle on Brendon Santalab, the third time the pair had clashed in the opening period. Romeo Castelen hits his shot hard at the wall and it someone easily sails through and into the left-hand side of the net far away from the dive of Roar keeper Jamie Young. 3-1

39′: An appeal for a foul near the halfway line by Romeo Castelen seems to catch the Roar defence by surprise but referee Peter Green waves play on and Brendon Santalab breaks down the right with James Donachie in pursuit. Once inside the box, the Wanderers striker cuts back onto his left-foot and slots a shot low and hard into the Roar net. 3-2

53′: Dimas swings a freekick into the box where Roar keeper Jamie Young blocks a shot from Mark Bridge but the ball bounces back to Romeo Castelen who blasts his shot into the roof of the net from close range. 3-3

59′: Another Dimas freekick curls wicked into the six-yard box. Young punches amid a pack of players but the ball falls on the edge of the box where it bounces around Thomas Broich and falls for Castelen who hits an unstoppable shot to clinch his hat-trick. 3-4

81′: A great team goal from the Roar. Corona picks it up in midfield passes to Javier Hervas who advance the ball to Tommy Oar. He pushes it wide to Henrique who squares across the goal to an unmarked Jamie Maclaren who taps into the open net. 4-4

102′: With fatigue setting in, Shannon Cole is allowed to run towards the Roar goal and hits a shot that is palmed away to the right by Jamie Young. Mark Bridge is first to the ball and quickly squares back across the goal to give Dario Vidosic a close-range tap in. 4-5

It has been an amazing turnaround season but two things will stick in the minds of some Roar fans over the coming weeks. Had we scored against Melbourne Victory in the last-round of the regular season we could have secured the Premier’s Plate and home finals advantage. And of course, we led 3-0 against the Wanderers. But that’s football. Onward to an even better season next year. 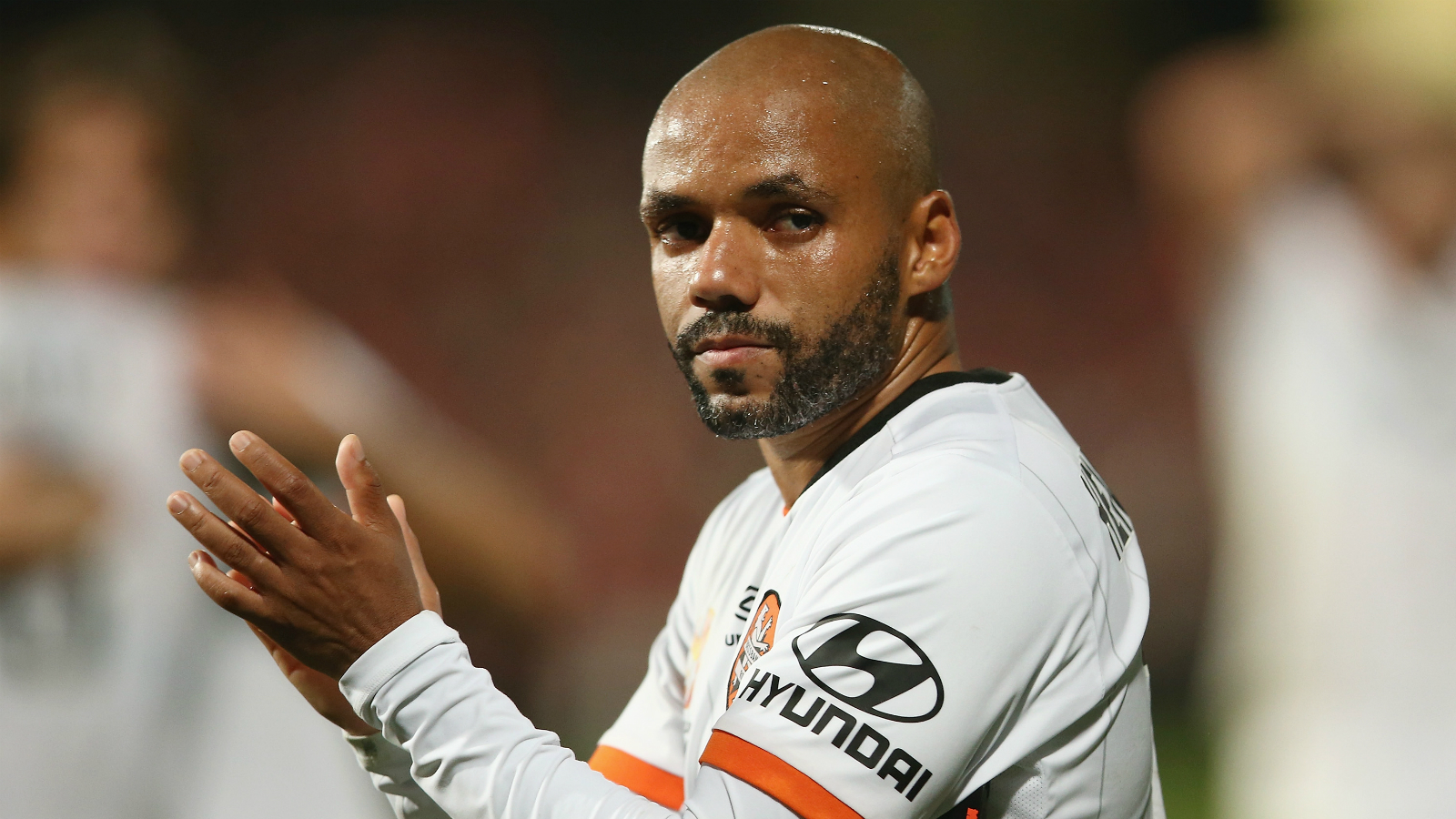 Brisbane Roar striker JAMIE MACLAREN: “We’re hurt. You go 3-nil up and you think the game’s over. We took our foot off the pedal and you get punished by such a good team like the Wanderers. We are very disappointed.

“We are just gutted and there are no words to explain.”

Roar Head Coach JOHN ALOISI: ” We should have dealt with the longer ball better. Shut-up shop, that’s not my style, that’s not our style and it will never be Brisbane Roar’s style while I’m there.”

And on the season the Roar has had: “It’s probably the season that got away. We had opportunity to win something a few weeks ago as well as also to get to a grand final tonight.

“It wasn’t meant to be. But the young boys will learn from the experience and we do have a lot of young boys.

“It’s hard to take now but I’m proud of the way they kept going until the end, I’m proud of their season and we’ll look to improve for next season to hopefully win something.” 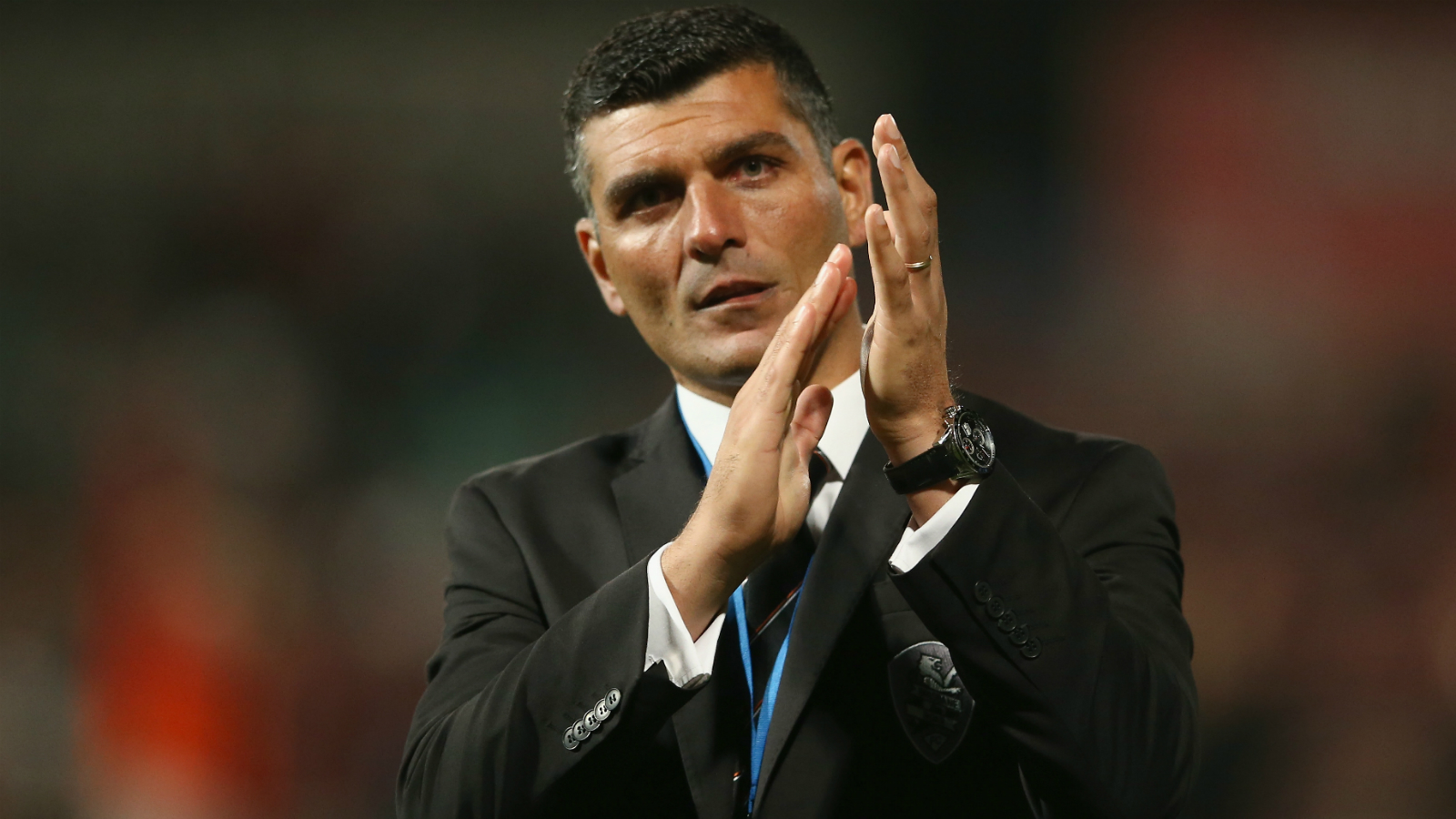 The Roar will now review the 2015/16 season and look at how we can improve on and off the field for an even stronger campaign in 2016/17. 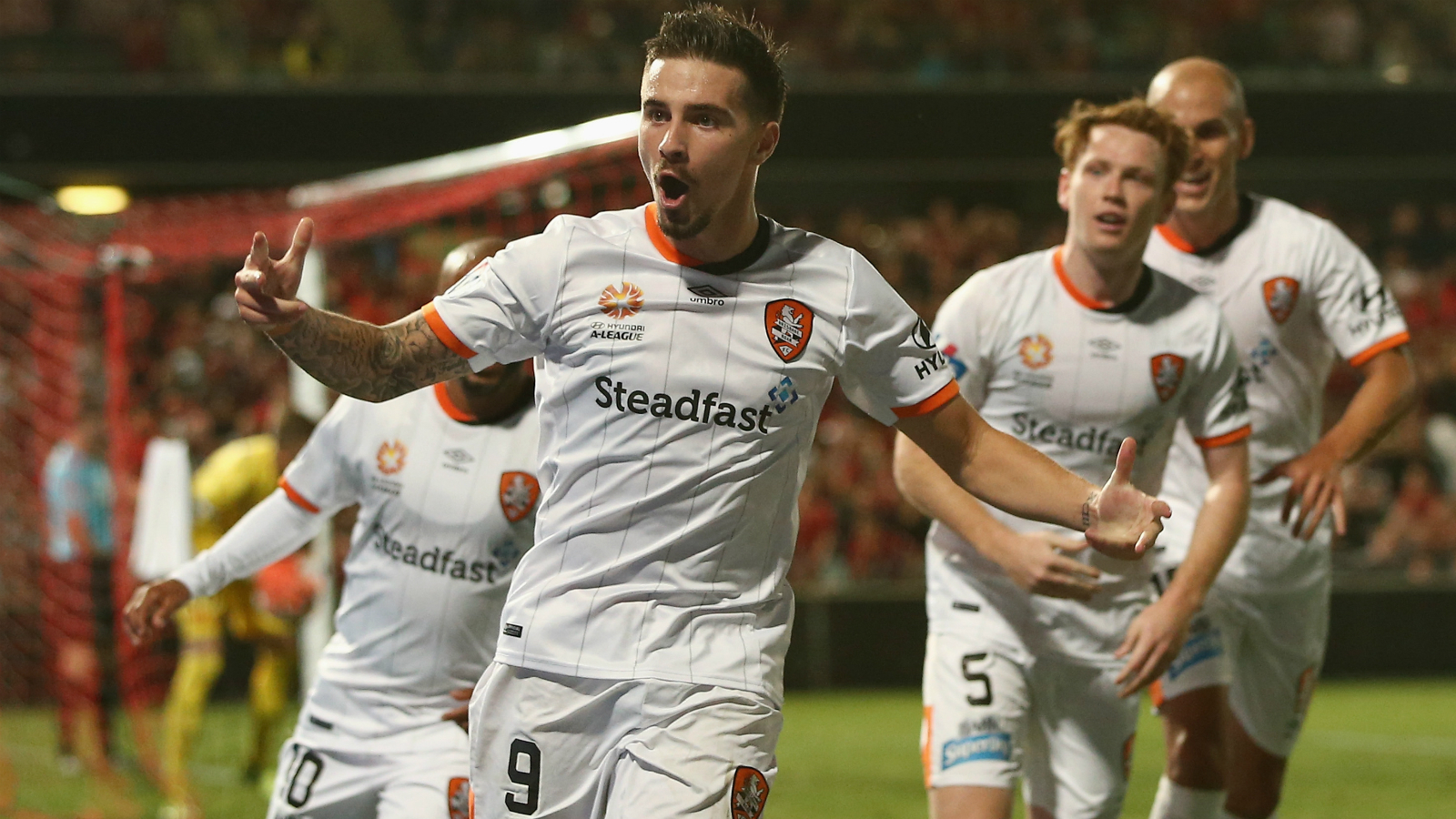