Brisbane Roar’s Costa Rican striker Jean Carlos Solorzano is ready to wind the clock back 10 years and gain some revenge against Villarreal’s Mexican Giovani when the two teams clash in the LFP World Challenge at Suncorp Stadium on Wednesday, 3 June (7pm kick off).

In 2005, the pair were opponents at the FIFA Under-17 World Championship in Peru.

Solorzano’s Costa Rica was leading Giovani’s Mexico 1-0 with two minutes to go in their quarter-final in Piura when Mexican defender Efraín Juárez Valdez (whose 67th minute own goal had given the Costa Ricans the lead) levelled the scores.

The Mexicans won the match 3-1 in extra time and went on to win the tournament.

Solorzano remembers the then 16-year-old Giovani, who was already on the books with Spanish giants Barcelona, as one of the stand-out players of the championship.

The Mexican provided the assist on half of the 16 goals his team scored at the championships (and played 84 minutes in Mexico’s 3-0 win over Ange Postecoglou’s and Robbie Kruse’s Australia) and went on to win the Silver Ball after being voted by the media as one of the tournament’s most outstanding players.

“He had great skills and a real presence on the pitch,” Solorzano said.

“You knew then he was destined for big things.” 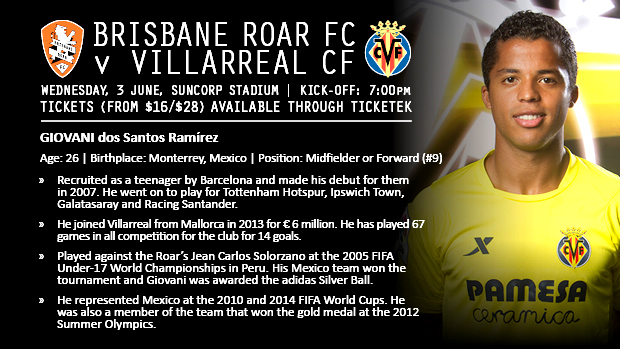 Giovani was on the bench for Mexico as a long-haired Solorzano scored one of the goals of his career.

“They called me a rock star in stories after that goal,” Solorzano laughed.

Villarreal this afternoon named a strong squad for their tour of Australia (they also play Adelaide United at the Adelaide Oval on Friday, 29 May).

Solorzano, known at the Roar as “Nico”,  is disappointed the squad doesn’t include fellow Costa Rican Joel Campbell, who has been in impressive form for the Yellow Submarine this season while on a loan spell from Arsenal.

“It would have been great to have another Costa Rican playing on Suncorp Stadium,” Solorzano said.

“But the Villarreal squad is strong and it is going to be a top game that all the Roar players are looking forward to.

“It will be the first time for me at the Roar that there will be more players on the park speaking Spanish than English. I’ll have to be careful what I say,” he joked.

Tickets to match start from just $16 for children and $28 for adults (plus credit card and transaction fees). For more information or to book tickets click  here .

Roar Memberships for next season are now available at the same prices as last season!

Go to   www.RoarMemberships.com.au   to take advantage of this great offer through our fast and easy booking system.

Current Roar members who want to secure the same preferred seats in season 2015/16 as they had at Suncorp Stadium this year have until 9am, Monday, 13 July, 2015, to renew their Roar memberships.

Memberships can be secured with a deposit of just $25.