The initiative will deepen the Roar’s involvement in the community by teaming with local leaders across the state who will provide an active and accessible link to the club.

“Community connection is an integral part of being a club anywhere in the world. For Brisbane Roar, we have a social responsibility to connect, embrace and nurture our state and city,” Pourre said.

Brisbane Roar’s Community Director Brendon Boss has been in the role since July after working within the ONE GOAL Rewards local club program for three years.

Boss has been involved in grassroots-level football for over 20 years and says the Community Ambassador program is another positive step forward for the Roar.

“Community engagement is now part of our values across the entire club,” he said.

“Everyone from football and admin to our community team on the road understands the importance of engagement and are passionate about getting involved.”

“The players love being out, meeting new people and supporting community events and charities,” Aloisi said.

“Craig (Moore – the Roar’s Football Operations Manager) has said ‘yes’ to 50-plus player appearances in the last few months and we want this to be a habit rather than an exception.” 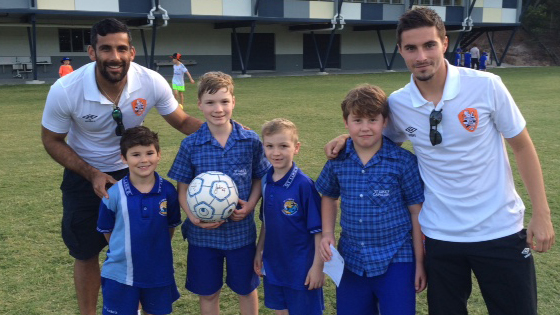 Brisbane Roar has appointed 2009 and 2012 Queenslander of the Year Jim Bellos as the club’s inaugural Chief Ambassador.

For over 10 years, Bellos has worked tirelessly to resolve difficult community and cultural issues through the development of positive and unique sporting events.

His programs have encouraged interaction and improved understanding for more than 20,000 youths from diverse cultural and religious backgrounds.

Bellos uses sport to attract young people who are at risk, marginalised, disadvantaged or from refugee backgrounds as an influential power for change, giving young people hope for the future and making their communities a better place.

Brisbane Roar is now looking for other individuals involved in community groups across Queensland who would like to be part of the club’s Community Ambassador program.

A focus on football is preferred, however not needed.

The Ambassador roles will entail the following:

Ambassadors will benefit through:

To express your interest, click here to fill out our Ambassador Application Form.

Applications close at midnight Sunday, 15 November with the announcement of successful candidates to be made in the first week of December.