Brisbane have suffered a 2-1 defeat to Adelaide United with FFA Director of Referees Ben Wilson acknowledging that a referee mistake in second half stoppage time cost the Roar a vital point away from home at Coopers Stadium on Sunday.

Roar keeper Michael Theo received a red card after coming into contact with Dylan McGowan. The decision also handed the hosts a penalty from which Cirio converted, handing the three points to Adelaide.

Head Coach John Aloisi was disappointed with the result in a match that he believed his side deserved to win.

“In the final third we lacked a little bit in terms of the final pass. We kept on shifting them and when you do that eventually the opposition will tire and space will open up,” Aloisi said.

“In the second half, we were all over them. We got the goal we deserved and we thought we would go on to get the three points. It wasn’t to be, we now need to move on and make sure everyone is ready for our next game.”

The Roar created good chances from overlapping runs on the right wing allowing Man of the Match Brandon Borrello and fullback Jack Hingert to whip in a number of threatening crosses. The Roar dominated the first-half count for balls into the area, 18-4 at the break.

Despite having positive moments in the first half the Roar trailed 1-0 at the break and then lost captain Matt McKay to a knee injury shortly after half-time. 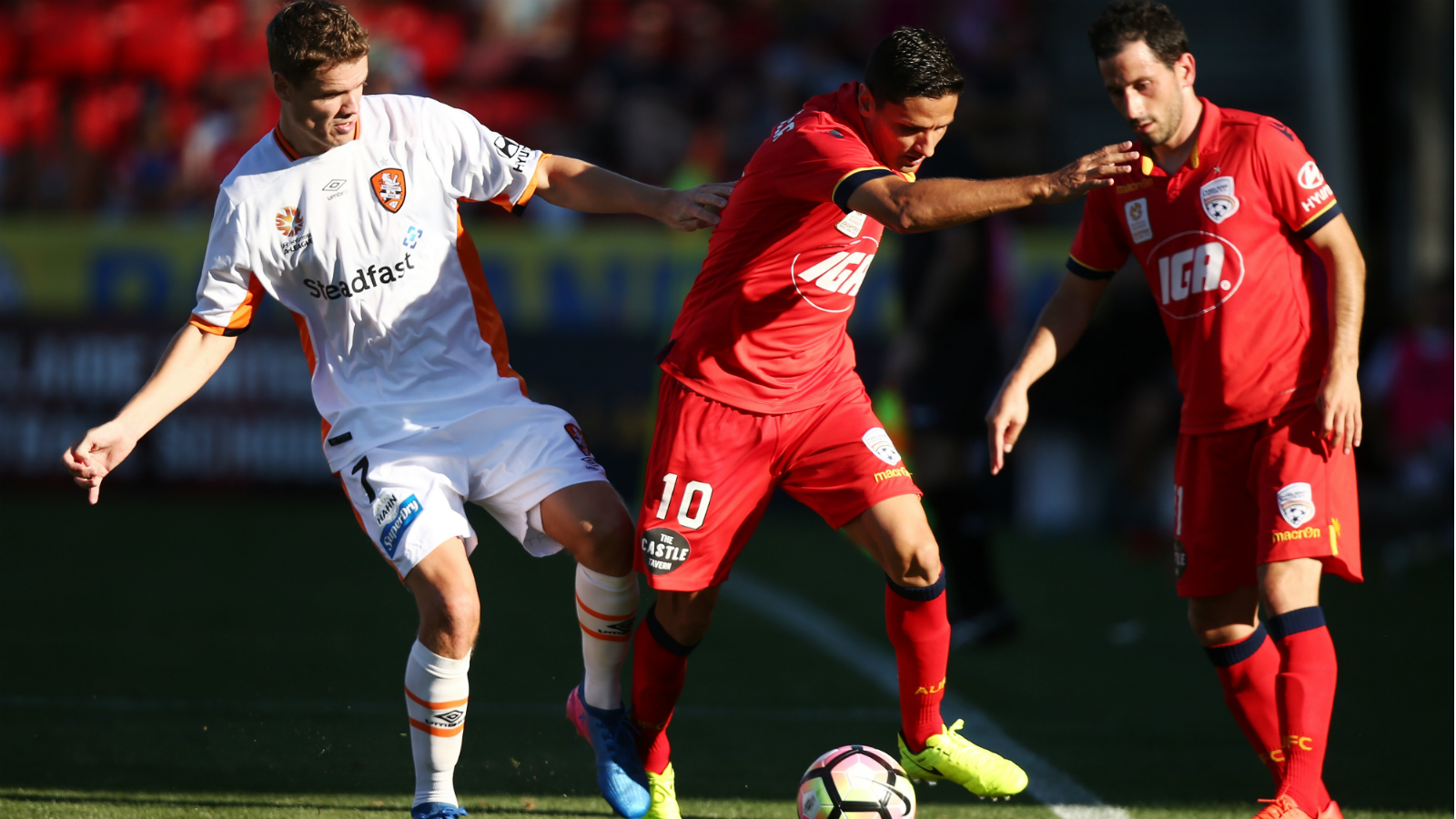 It was another overlapping run on the right that led to Brisbane’s first big chance of the second half as Borrello and Brett Holman combined to find Arana in the area who was unable to wrap his foot around the ball at the near post.

On the hour mark, the Roar deservedly restored parity as Corey Brown pounced on a parried shot before thinking quickly to centre the ball to Jamie Maclaren who was left with a tap-in from point-blank range for his 14th goal of the campaign.

Holding midfielders Joe Caletti and Thomas Kristensen were both heavily involved in the lead-up play with an inch-perfect ball from the teenager spltting a pair of Reds defenders before a stinging shot from the Dane brought about the opportunity.

Brisbane’s first-half ascendancy on the right side of attack developed into complete dominance in the second period as the Reds struggled to manage the Borrello-Hingert-Holman combination.

The hosts were reduced to 10-men with a tick under 10 minutes to play as Marcelo Carrusca picked up a second yellow card, an advantage for the Roar that Kristensen came within inches of capitalising on moments later as he flashed a shot just wide of the post.

In the final stages of stoppage time, Cirio converted from the spot against makeshift goalkeeper Kristensen, securing the victory for the Reds.

The result ends Brisbane’s four-match unbeaten streak away from home in the Hyundai A-League and the side now returns to Suncorp Stadium for the first time since February to play Melbourne Victory.

16′: Baba Diawara wrestles away from his marker, meets an inswinging corner and heads home at the near post. 1-0

60′: Thomas Kristensen’s long-range driving shot is parried into the path of Corey Brown and cuts back to Jamie Maclaren for a simple tap-in. 1-1

99′: Cirio converts from the penalty spot after Michael Theo receives a red card for contact with Dylan McGowan. 2-1 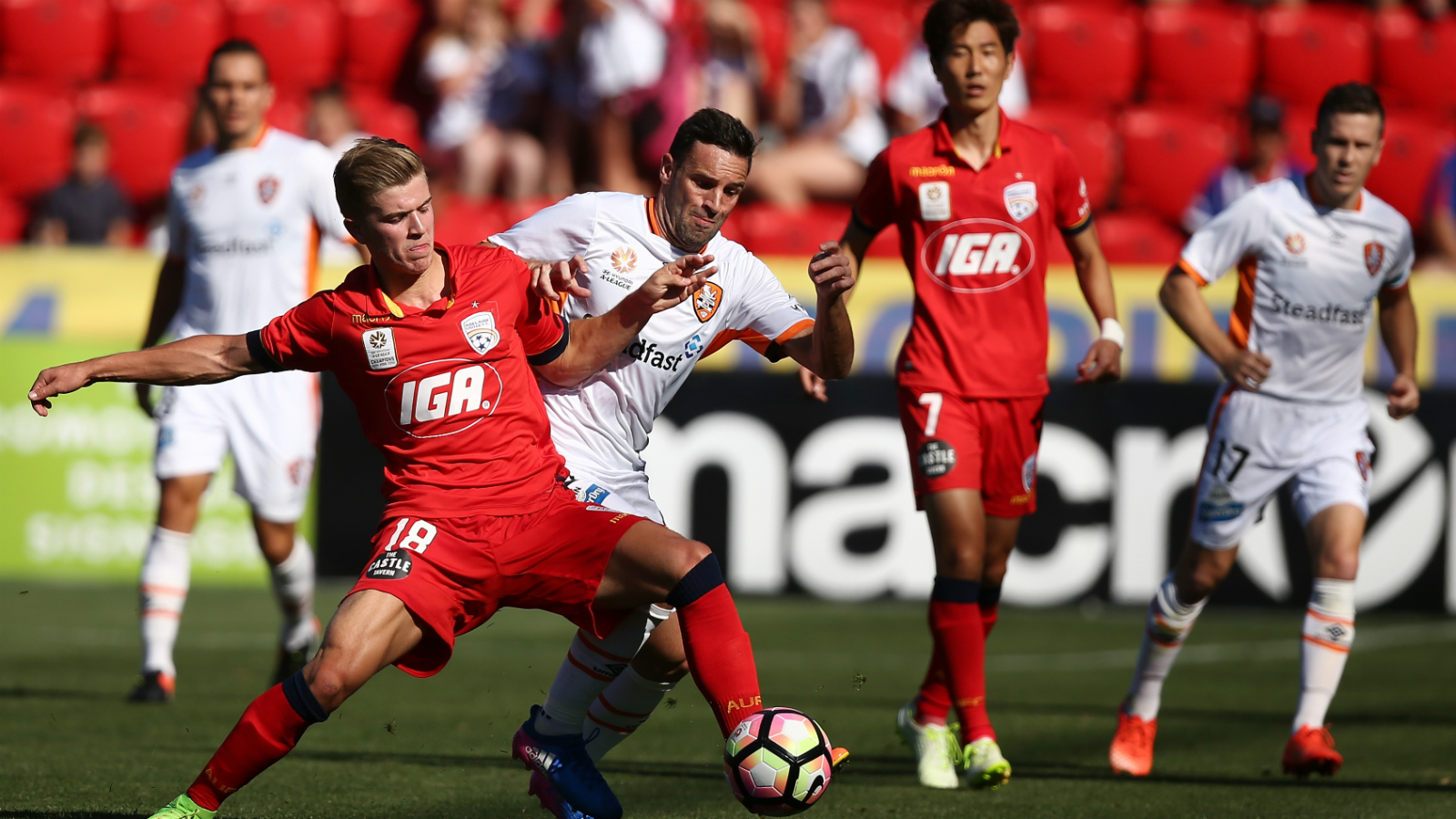