Brett Holman’s first goal in the Brisbane orange has secured a 1-1 draw with defending Champions Adelaide United on Friday night.

Holman opened the scoring from long-distance on the hour mark and is pleased to open his Brisbane Roar account with his first goal in Australian domestic football in 14 years.

“It was good to get the first goal for the team but unfortunately, they got a cheap goal at the end by our standards,” he said.

“We had enough opportunities to kill off the game but I suppose a point away from home is something we can handle in the end.”

The Roar will now head into next weekend’s clash at Suncorp Stadium against table toppers Sydney FC on a four-game undefeated streak. 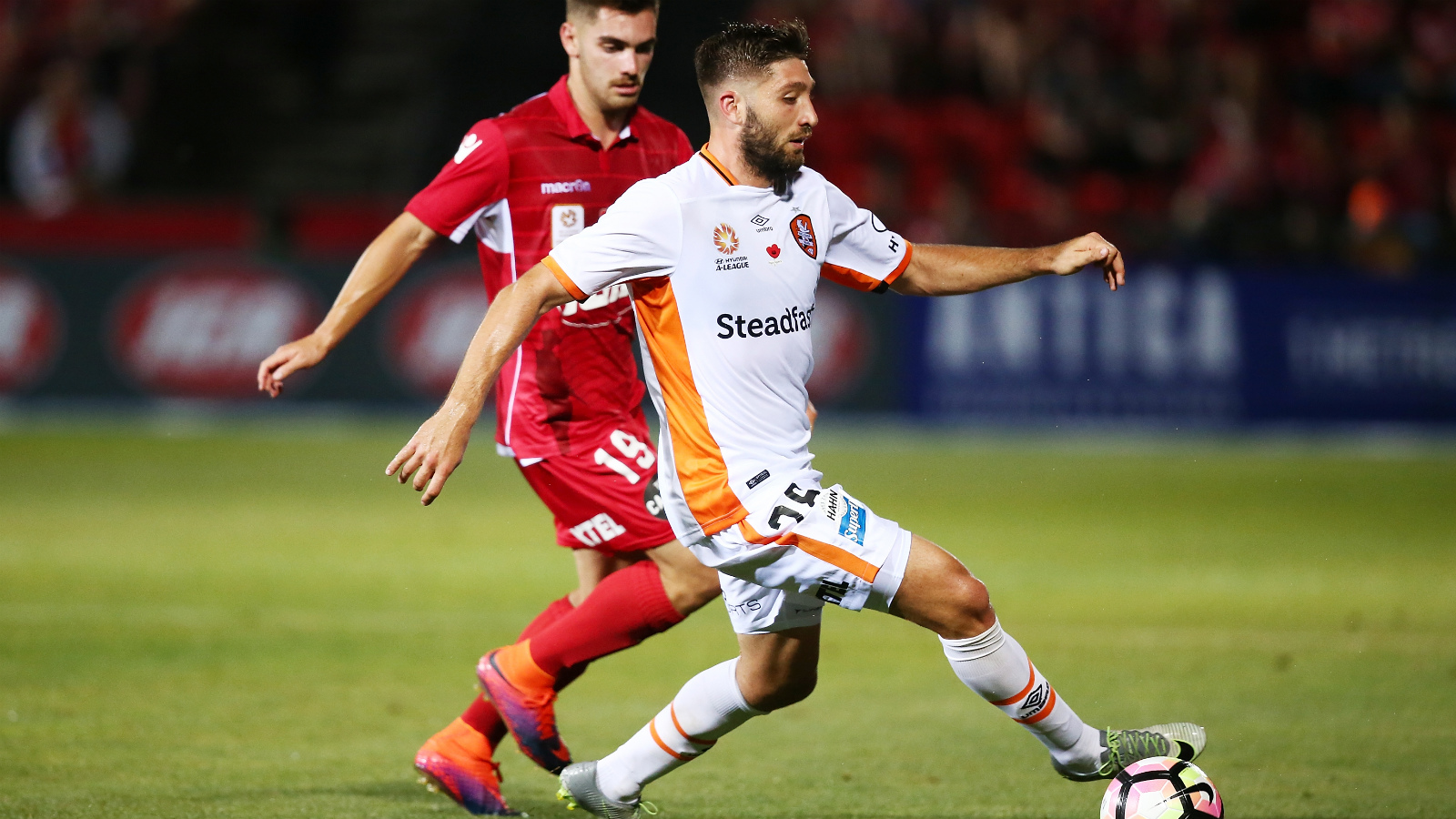 The Roar’s first opportunity came through a swift counter attack as Brandon Borrello latched onto an inch-perfect through ball from Luke DeVere, stinging the palms of Galekovic from distance.

NAB Man of the Match Tommy Oar forced three more saves later in the half with two long-range attempts in quick succession before a side-footed effort from the penalty spot on the half-hour mark.

Brisbane continued to threaten the Reds goal early in the second-half. A pinpoint free kick from Dimi Petratos (below) found Luke DeVere at the top of the six-yard box but he couldn’t keep a lunging effort down.

Holman’s long-range strike on the hour mark handed the Roar a deserved lead before an end to end final half-hour.

Sustained pressure from the home team paid dividends in the 78th minute as Sergi Guardiola’s header restored parity in the Hyundai A-League Round 6 clash. 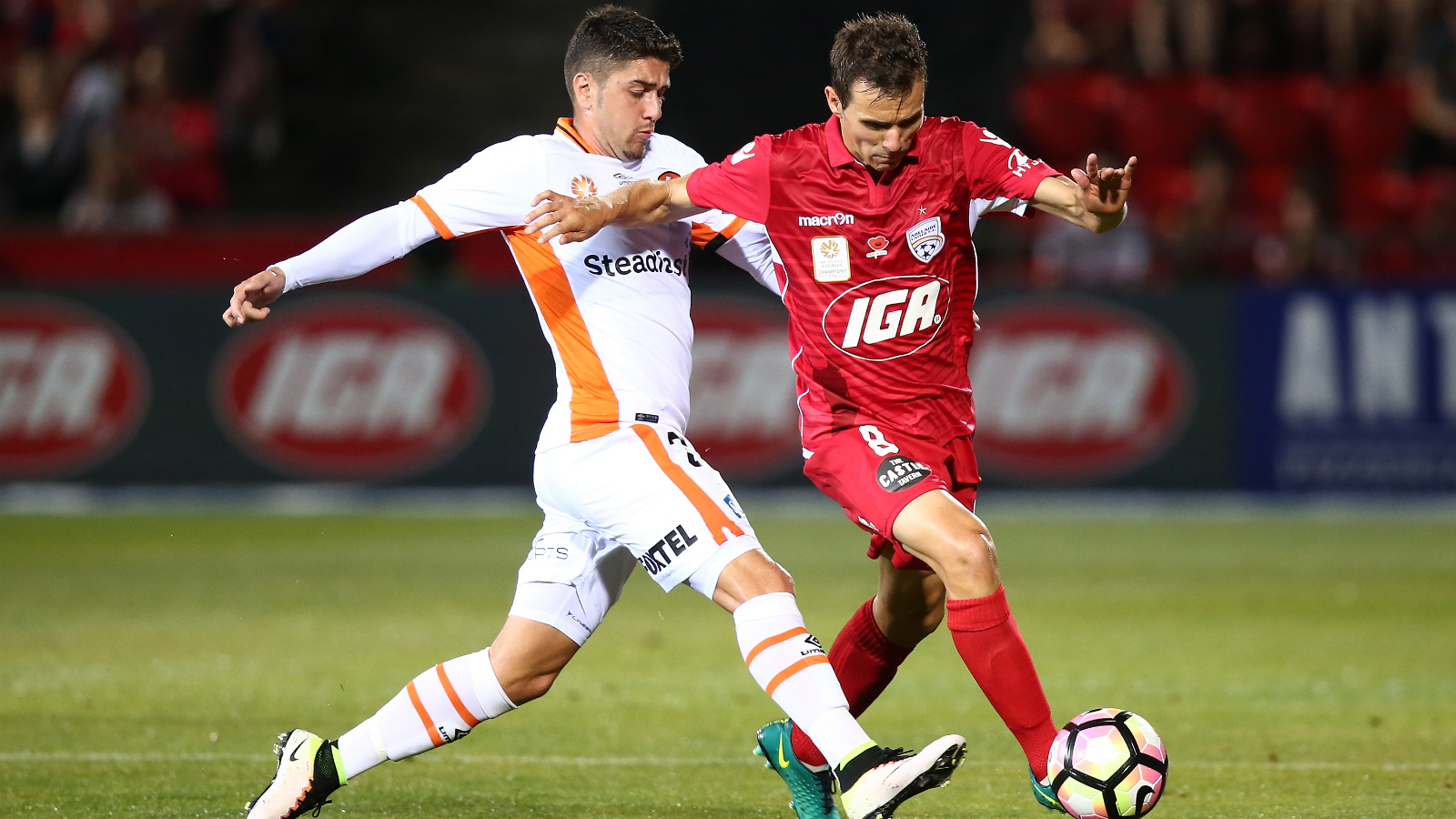 Young gun Joey Katebian was introduced in the 83rd minute in place of Holman and almost assisted for Thomas Broich with his first touch of the ball. The two substitutes combined inside the area but the German’s shot was blocked by Adelaide’s defence.

John Aloisi’s side returns to Brisbane with a point and the Roar’s Head Coach believes that his team had opportunities to clinch all three points.

“Away from home it’s not a bad point, I just felt at times tonight that we didn’t defend as well as we did last week,” Aloisi said.

“There were some good combinations. It would have been an entertaining game for the neutral, but we would have liked more out of the game.”

Manuel Arana made his second appearance for the Roar and looked dangerous moving the ball into the attacking third. 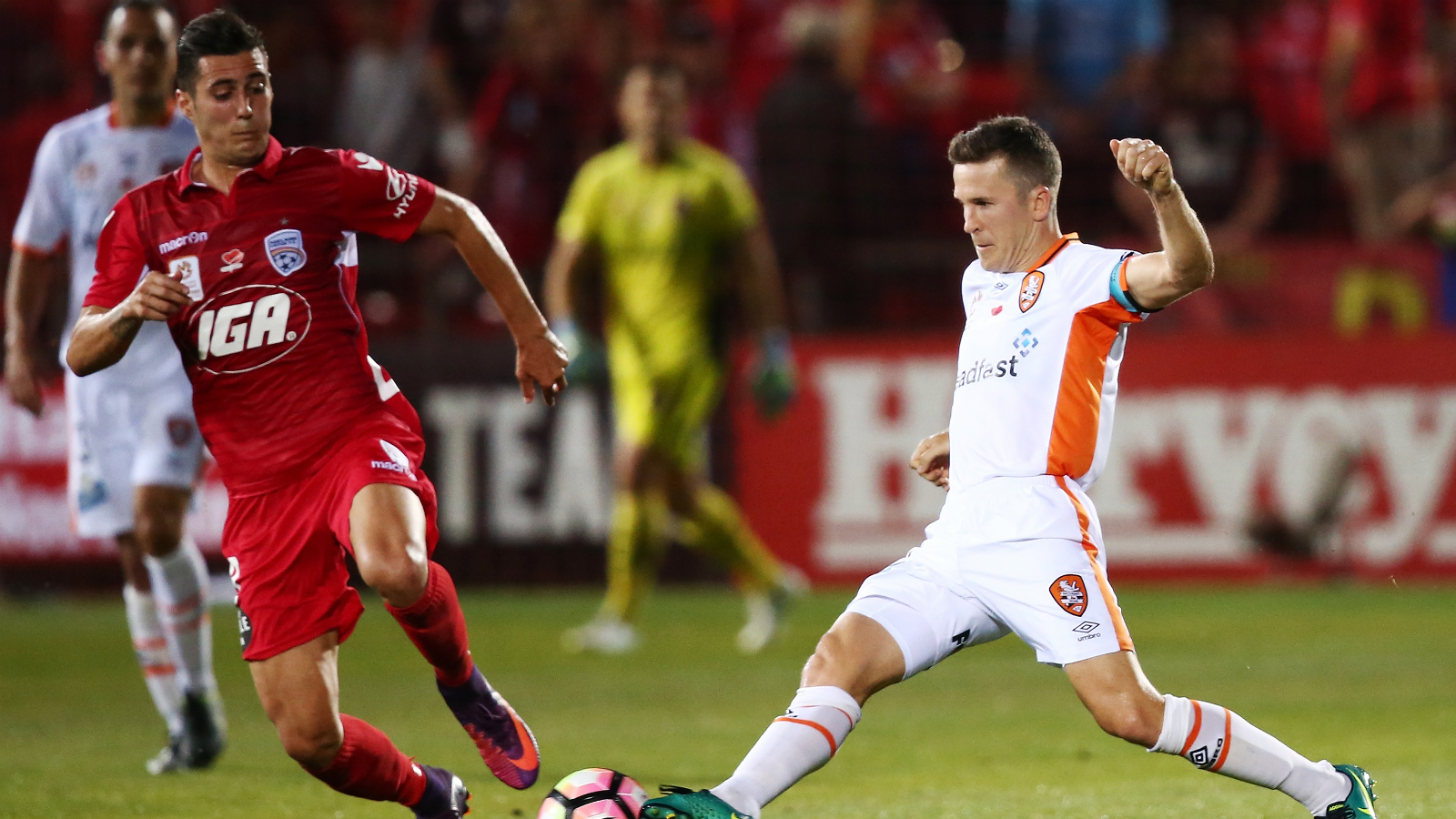 60’: Matt McKay feeds the ball to Brett Holman who charges towards the penalty area, shoots from 25m and finds the back of net with a slight deflection from Iacopo La Rocca. 0-1

78’: Sergi Guardiola is found at the back post by Ben Garuccio and heads back across goal and finds the back of the net. 1-1

Tommy Oar (below) was named NAB Man of the Match as was unlucky to not found the back of the net. The winger forced Eugene Galekovic into three saves during the first half and a fourth during the second period.

“It was disappointing to not get the first goal with a few chances but I just need to patient, keep working hard and I’m sure it will come,” Oar said.

“As a team we’re a bit disappointed with the second half. We can’t dwell on it though and just look forward to next week.” 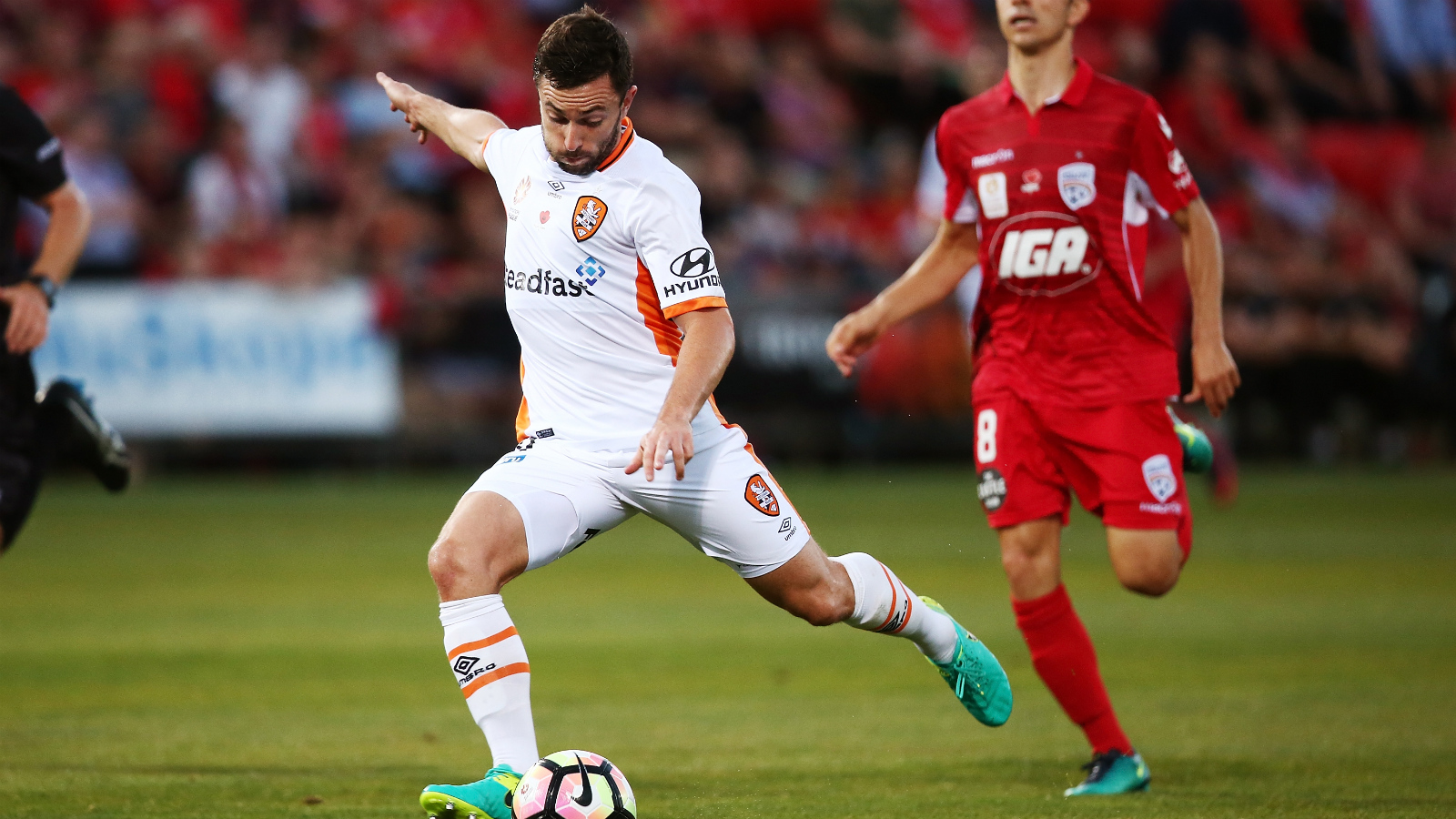 Brisbane Roar Head Coach JOHN ALOISI: “I thought Brett [Holman] did well, he worked hard. He comes to the ball a little more than Jamie Maclaren does which can create an overload in midfield and then we have a number of players who can run in behind.

“I thought we lost the ball cheaply at the start and then we started to grow into the game and started to shift them.

The Roar return to the fortress at Suncorp Stadium where the squad will wear its maroon kit for the very first time in an interstate clash against Sydney FC on Saturday, 19 November (6:50pm KO Qld time). Tickets can be purchased HERE. 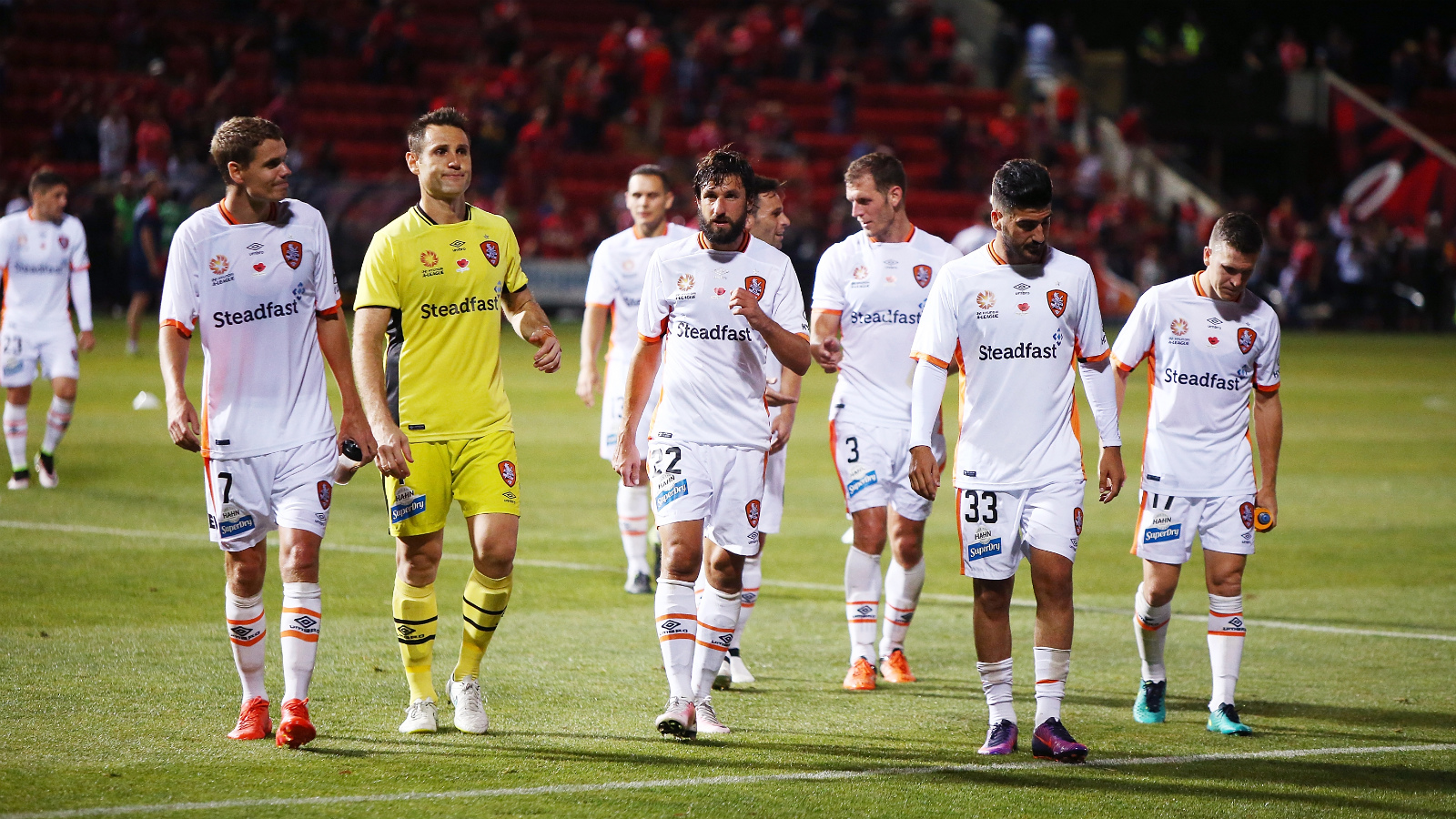