Roar squad boosted by US keeper

Brisbane Roar has secured American goalkeeper Haley Kopmeyer for the new Westfield W-League season, which kicks off against Canberra United at Suncorp Stadium on Sunday, 18 October (1pm kick off).

The 25-year-old is from Seattle Reign FC, where she trains alongside Hope Solo, a renowned member of the United States squad that won the FIFA Women’s World Cup in July.

Kopmeyer had a decorated college career playing for the University of Michigan Wolverines, where she earned multiple regional (Big Ten) selections and in 2011 set a record for the most saves by a Michigan women’s player.

She played four times for the Reign last season and saved 17 of 19 shots on her goal. She also had a stint in Cyprus with the Apollon Limassol women’s side.

Kopmeyer (below in Roar kit today) said she became interested in playing in Australia after seeing how well the Matildas performed in reaching the quarter-finals at the recent FIFA Women’s World Cup.

“Their talent level has grown exponentially over the last few years and their performance at the World Cup showed that,” Kopmeyer said.

“When the opportunity arose to come over here and play in a great league and play for such a well-known club, I couldn’t turn it down.” 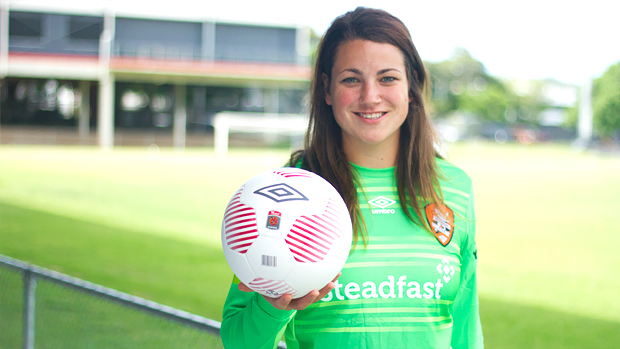 “I want the team to succeed and I want to keep getting better in my own game. We want to take it all the way and I am happy to be part of that,” she said.

Brisbane Roar W-League team Coach Belinda Wilson secured the services of Kopmeyer, one a one-season loan, following the retirement of German World Cup squad member Nadine Angerer, who had been the Roar’s goalkeeper for the last two seasons.

“Haley will add strength down the spine of our team and allow us to play our way. She has a strong personality and she will demand the best out of her teammates. She is a natural leader and a natural fit into our squad which will help the senior group with guiding the new players through the season.” Wilson said.

Kopmeyer (in action below) is scheduled to train for the first time with the Roar this afternoon as they prepare for Sunday’s opener.

The Roar Women, have undergone a major rebuild following the departure of several experienced players in the off-season.

Nine new players have been added to the squad which still includes Matildas Clare Polkinghorne (on loan from Portland Thorns), Tameka Butt and Katrina Gorry. 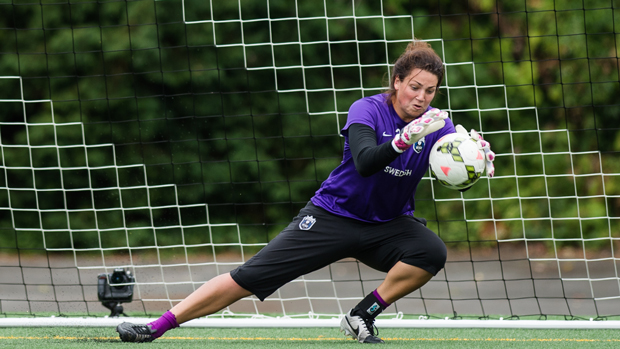 Wilson believes the squad has a good balance between youth and experience.

“There will always be challenges in bringing a new squad together and I have no doubts this group is up to those challenges,” Wilson said.

The tour will include matches against China and England with the possibility of a third game, and is seen as crucial preparation for the Westfield Matildas’ Olympic qualifiers in February 2016.