Brisbane Roar players Clare Polkinghorne and Katrina Gorry have played significant roles in the Westfield Matildas’ 3-1 win over tournament hosts Japan in their opening match of the Olympic qualifiers in Osaka.

Polkinghorne (below) captained the side and played an outstanding game while Gorry scored and provided a sublime assist.

The Roar’s Emily Gielnik earned her eighth Matildas cap when she came on as a late substitute while Tameka Butt was on the bench. 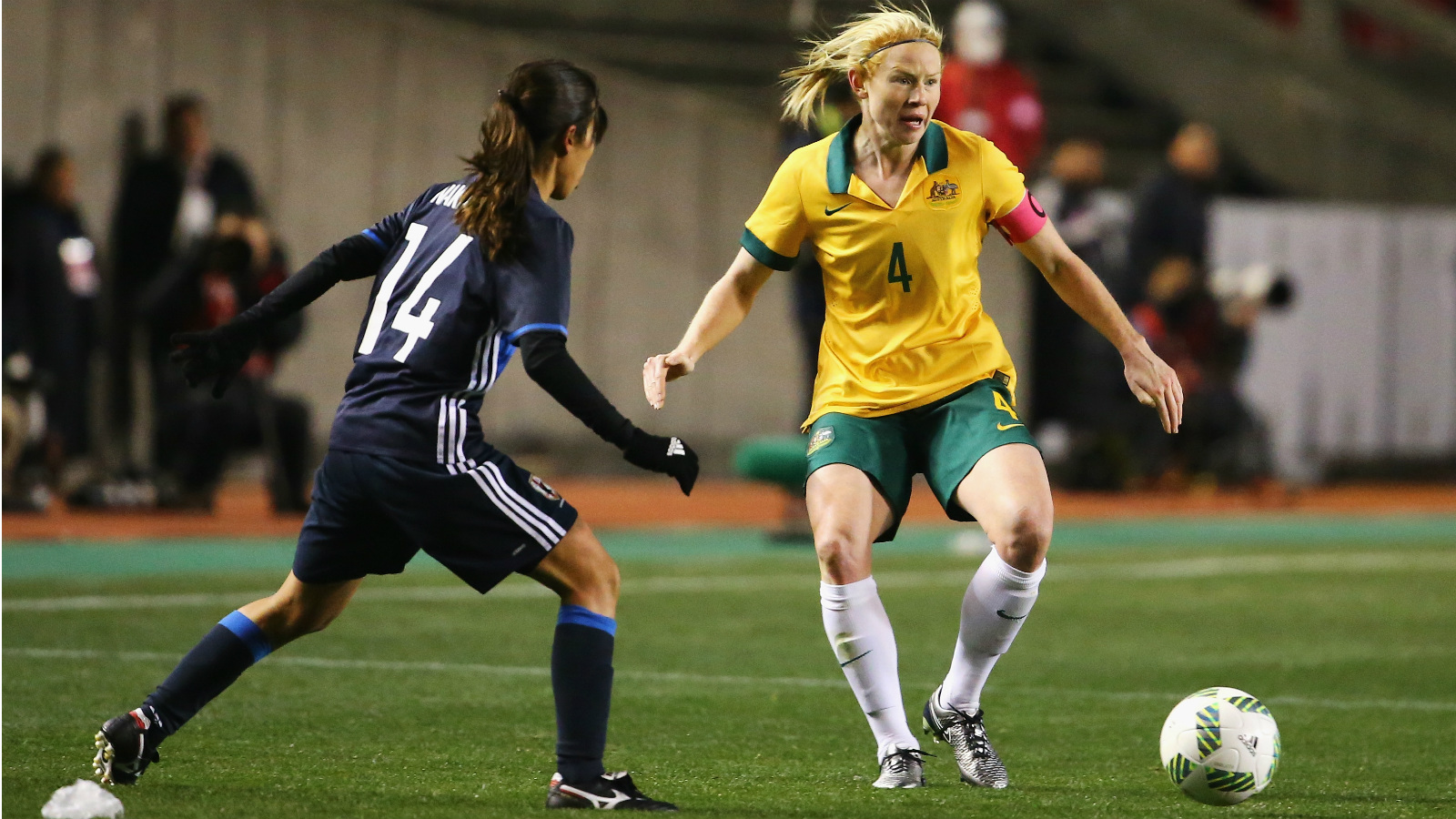 Westfield Matildas Head Coach Alen Stajcic said his team had spent the last four weeks planning on how to turn the tables on the loss in Canada and he was ecstatic with the performance as the Westfield Matildas toppled the home team and highest-ranked country in the qualifying tournament.

“We know they’re a world-class opponent and we’ve prepared over the past four weeks to play this match and play it at a tempo and a rhythm that we wanted to rather than how we played the World Cup match against them six months ago,” said Stajcic.

“I thought we did that very well and compared to six months ago I thought we controlled better patches of the game and even though Japan created quite a few chances I think we were a threat and a lot more positive than we were in that game six months ago.”

“We executed a lot better than that day and I think we thoroughly deserved the win.”

But while being delighted with the result, Stajcic knows one win counts for nothing and that there is still a lot of hard work ahead before the Westfield Matildas can start to think about the Olympics in Rio in August.

“It’s just one game, there are four more tough matches. This is a tournament where any team can beat any team…so we’ll enjoy this win for an hour and then we’re focusing on our next match because if we think this is enough we won’t qualify.”

After not playing a match at the 2015 FIFA Women’s World Cup, co-captain Polkinghorne was given the captain’s armband for the match while Japan’s starting line-up featured nine of the 11 players that started against the Westfield Matildas in last year’s World Cup Quarter Final, goalkeeper Erina Yamane and Emi Nakajima the only new faces.

Despite her left-footed shot seriously threatening Yamane in the Japanese goal, Heyman’s effort and the build up play signalled the Westfield Matildas’ positive approach early on.

In her 50th appearance, Westfield Matildas goalkeeper Lydia Williams produced a sharp save to deny Mizuho Sakaguchi in the 21st minute and it proved influential as De Vanna struck four minutes later, getting onto the end of a pinpoint Gorry cross to direct her header into the back of the net, the veteran’s 38th goal for her country. 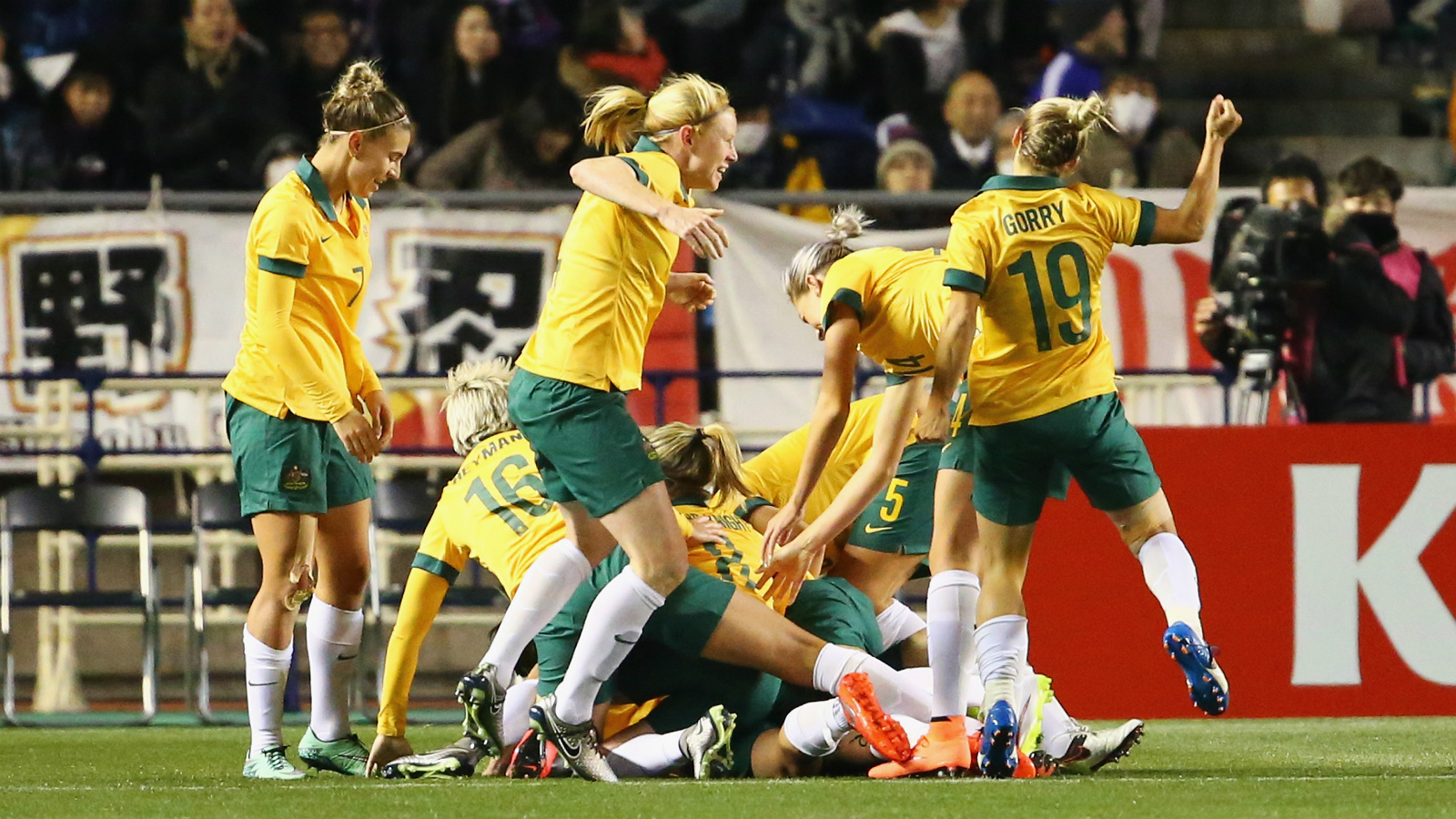 With their tails up, the Westfield Matildas then doubled their advantage in the 40th minute. With space in front of her, De Vanna released Heyman with a well weighted through ball, the striker taking a quality first touch to round Yamane before slotting the ball into an empty net.

But right on the stroke of half time Japan clawed a goal back through Yuki Ogimi to leave the game delicately poised at the break.

Williams pulled off a crucial fingertip save just after the hour mark as Japan pegged the Westfield Matildas back into their won half in search of an equaliser.

However in the 78th minute Gorry, arguably the shortest player on the field, rose to expertly angle a header from Emily van Egmond’s quality cross to restore the two goal lead, a lead they would hold onto up until the final whistle.

The victory puts the Westfield Matildas at the top of the group as China defeated Vietnam 2-0 while Korea Republic edged out DPR Korea 1-0 in the other two matches played on the opening day.

The Westfield Matildas must now back up for their next match against Vietnam on Wednesday (2 March 2016) at Yanmar Stadium (kick-off 4.35pm local, 5.35pm Qld time). The match will be telecast LIVE on 7mate

The Westfield Matildas Olympic Games Qualifiers will be showcased LIVE on 7mate.

A top two finish in the group will see the Westfield Matildas qualify for August’s Olympic Games in Rio de Janeiro.