Why the Roar and Corona have clicked

Spanish import Corona has spoken for the first time about how inspired and happy he is to be playing with Brisbane Roar.

The talented midfielder said he had settled easily in Brisbane (he arrived just four weeks ago) and was thankful for how he has been warmly embraced by the club and its supporters.

“I am very happy, my team mates are excellent . . . they help me in everything, with my family, my language and with my play too,” Corona said.

“My opinion is the team is very good.

“We are a team (that always) has a very many chances . . . in three games, we have had many chances to score.

“This is good because we are a team that wants to win the game from the first minute.”

Roar Head Coach John Aloisi said it was pleasing that the former Almeria player, with nearly a decade of experience in La Liga, had settled quickly – on and off the field.

“It is not easy to come from another country – he’s never played outside of Spain – and to settle in so quick,” Aloisi said.

“(Corona) helps our team tick a lot, that’s important for us.”

Corona’s class has already been recognised with two Hyundai A-League Team of the Week selections in the first three rounds.

He is looking to shine again when the Roar host Adelaide United FC at Suncorp Stadium on Saturday (6.30pm kick off).

The Reds also play with considerable Spanish influence through their Head Coach Guillermo Amor and players including Marcello Carrusca and Pablo Sanchez.

Corona said he had been pleasantly surprised by the speed of play and quality of players in the Hyundai A-League.

“I enjoy it very much playing in the A-League. Many goals, for the players, the people . . it is good,” he said.

“The players are very strong, very fast (but) it is very important to relax, be calm, keep the ball.” 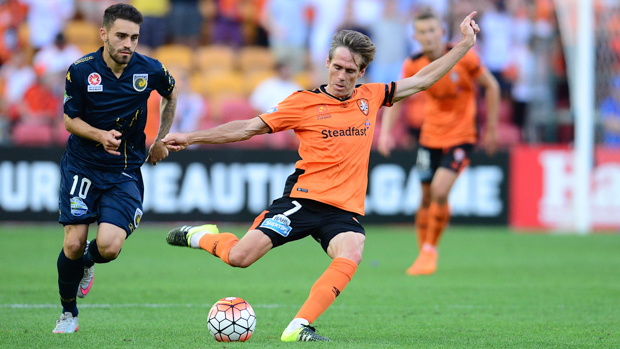 Aloisi today confirmed goalkeeper Michael Theo had not yet fully recovered from a quad strain and would not be involved in the weekend’s match.

He also confirmed fullback Shane Stefanutto, who resumed training this week from a calf injury, would be “involved in the squad”.

“He’s a very experience player, a leader on and off the pitch,” Aloisi said.

“He coaches out there so it’s good to have Stef back.”