Young Roar shoot down the Jets

After a scoreless first half, the Young Roar began to dominate possession after the break and the move started with good lead-up down the right in the 61st minute.

The ball was crossed in to the edge of the box where Shelford Dais stopped it dead at Sibatuara’s feet – and he struck it sweetly and fiercely to rattle the back of Jets net, giving keeper Luke Borean no chance.

“I did what I practised on so that proves practice does make you perfect,” Sibatuara said.

The winning goal atoned for Sibatuara (pictured below) missing a first-half sitter from close range.

“Even the best players miss. You have just got to forget about it and get on with it,” Sibatuara said.

“The boys showed great character today. It was a good result.”

It was the Young Roar’s first game in three weeks and although they looked rusty at the beginning, by midway through the second half they were all over the Jets, who could have returned to the top of the table with a draw or a win.

Jets coach Adam Piddick admitted his side had been outplayed by the Young Roar and had received a late-season reality check.

“Credit to the Young Roar boys, they came out and played the way they always play,” he said.

“We were very poor today. We didn’t apply what we worked on in training all week.

“We thought we could just turn up and get the result done but unfortunately (the Young Roar’s) good technical players that are striving for the next step to the next level – they went out there and got the job done.” 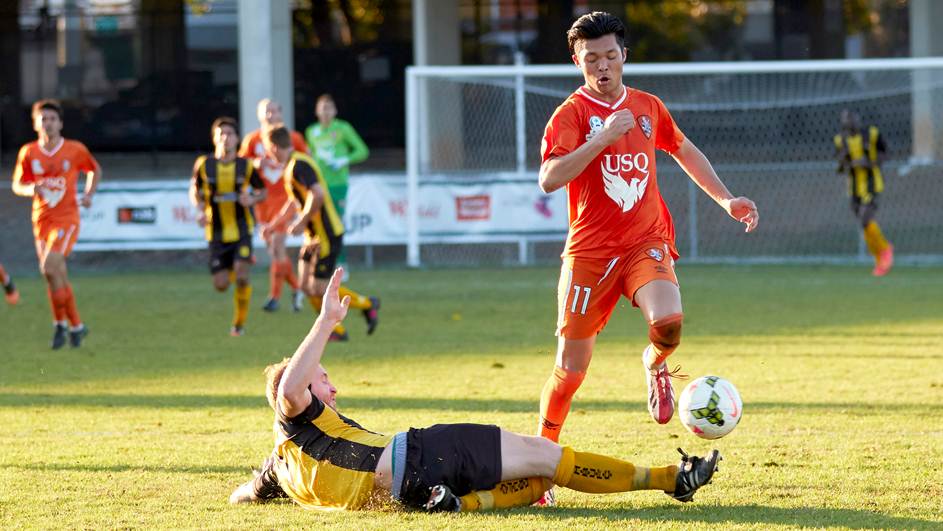 The Jets dominated territory in the first 20 minutes but it was the Young Roar who had the first two clear-cut scoring chances through quick counter-attacks.

In the 24th minute Dane Ingham, who had an impressive game, dribbled into the Jets box and squared to an unmarked Sibatuara on the left who had the goal at his mercy but scooped his shot over the bar.

Six minutes later Tommy Miller made a strong run down the right and crossed to Ingham in close but the teenager could only glance his leaping header across the goalmouth.

The Young Roar nearly paid dearly for the two misses when the Jets failed to convert two chances of their own later in the half.

In the 36th minute Young Roar keeper Tom Bilic did well to block a Jordan Farina header at the far post.

Two minutes later the Jets were denied the best chance of the half when a long-range shot from midfielder Joseph Champness beat Bilic but struck the crossbar, bounced down and out of the goalmouth and was quickly cleared by a relieved Young Roar defence.

Once the Roar went ahead, they never looked like equalising but the Jets squandered several second-half chances to equalise.

In the 67th minute Royce Brownlie was gifted the ball in the box by Bilic but put his effort straight back into the hands of the Young Roar keeper.

In the 79th minute, Jets substitute Jayke Cuschieri had a good crack from 25m but Bilic made a comfortable save.

The Young Roar then could have gone 2-0 ahead with seconds to go when a curling shot by Stephen O’Neill was palmed away one-handed in a spectacular save by Borean.

Although Young Roar captain Cameron Crestani had a strong game in his first match back after a leg injury, he was shaded in Player of the Match by Dais, who not only had a huge hand in the goal but also filled in impressively at right back when Jaiden Walker went off injured in the 56th minute.

In the earlier Under-18s clash, the Roar ran out 2-1 winners with the Jets’ consolation goal coming in the final minutes.