Two of the PS4 NPL QLD’s in-form sides played out an enthralling match as the Young Roar finished 1-0 winners to maintain their unbeaten home record this season.

Aaron Reardon’s spectacular overhead effort from the edge of the six-yard box opened the scoring early in the first-half and ultimately proved to be the decisive strike.

The Young Roar were the dominant side in the first period, but defended for a majority of the second as Olympic threatened to restore parity.

The visitors had a majority of territory in the second half, but Young Roar’s tight defensive set-up and intense pressure when defending ensured keeper Andre Jannese was rarely called into action.

Nicholas Panetta almost doubled Brisbane’s advantage midway through the second half, but his shot from distance at an open goal was cleared by Olympic’s last line of defence. 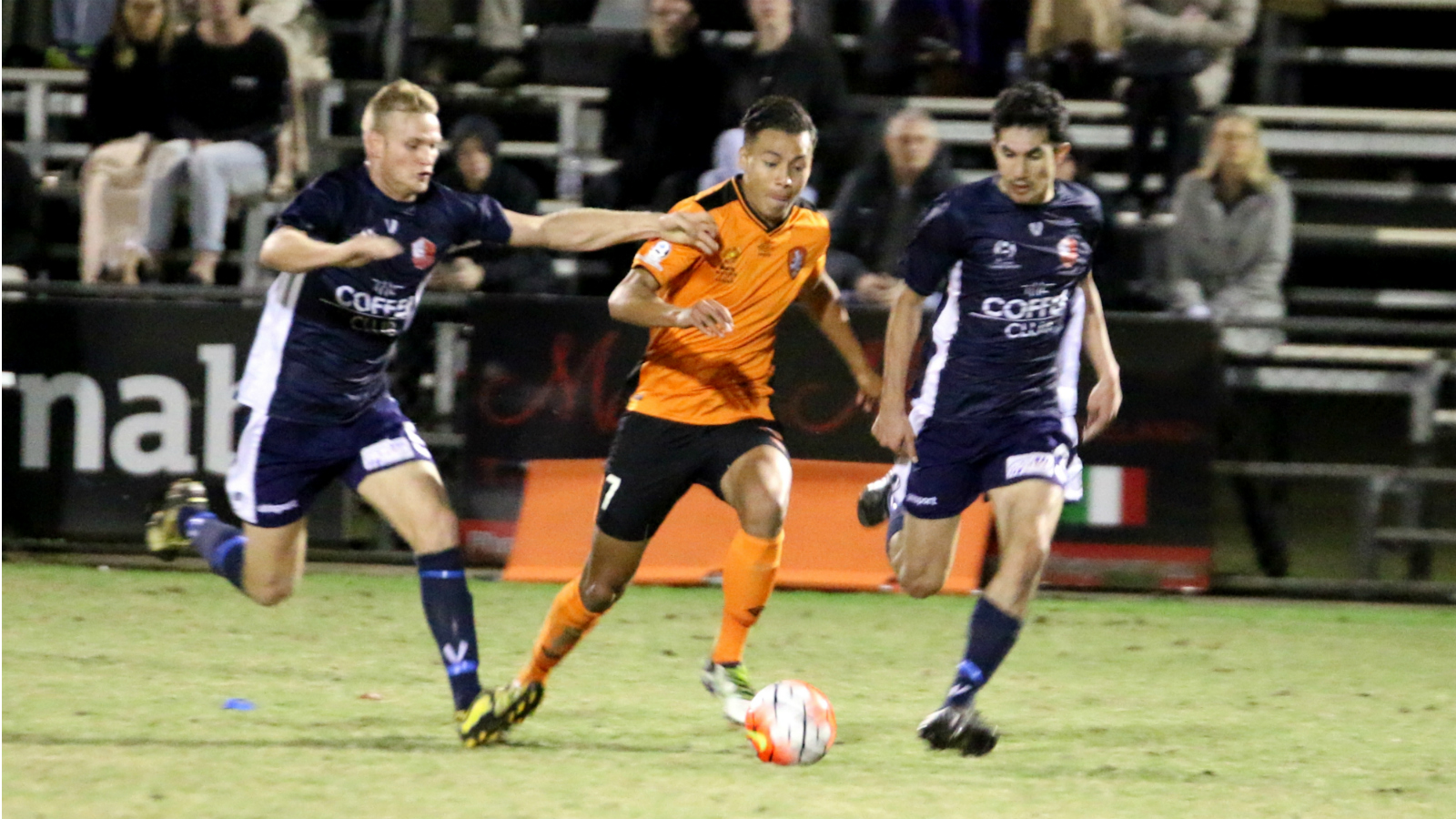 Dane Ingham’s (above) pace was often too much for the Olympic defence and the Young Roar striker was a constant threat on the left wing, creating space and delivering dangerous crosses into the area.

14′: GOAL YOUNG ROAR: Jesse Daley’s free-kick is palmed away by Nicholas Mooney, but only to the edge of the six-yard box. Aaron Reardon places himself perfectly under the fall of the ball and finishes into the bottom corner with an incredible overhead kick. 1-0

23′: CHANCE YOUNG ROAR: Dylan Wenzel-Halls weaves through a number of defenders and finds himself one-on-one with Mooney, but the keeper is quick to close the threat and saves well.

37′: CHANCE OLMYPIC: Daniel Byrne is played in behind the Young Roar’s defence and only has Andre Jannese (below) in his way. Byrne’s final touch is too hard and Jannese scrambles to stop the threat.

58′: CHANCE OLYMPIC : Ramone Close is found in the area from the right wing but his shot is stopped almost as the ball hits his boot by Jannese.

83′: CHANCE YOUNG ROAR: Panetta has a long-range attempt at an open goal but the Olympic defence clear off their own line. 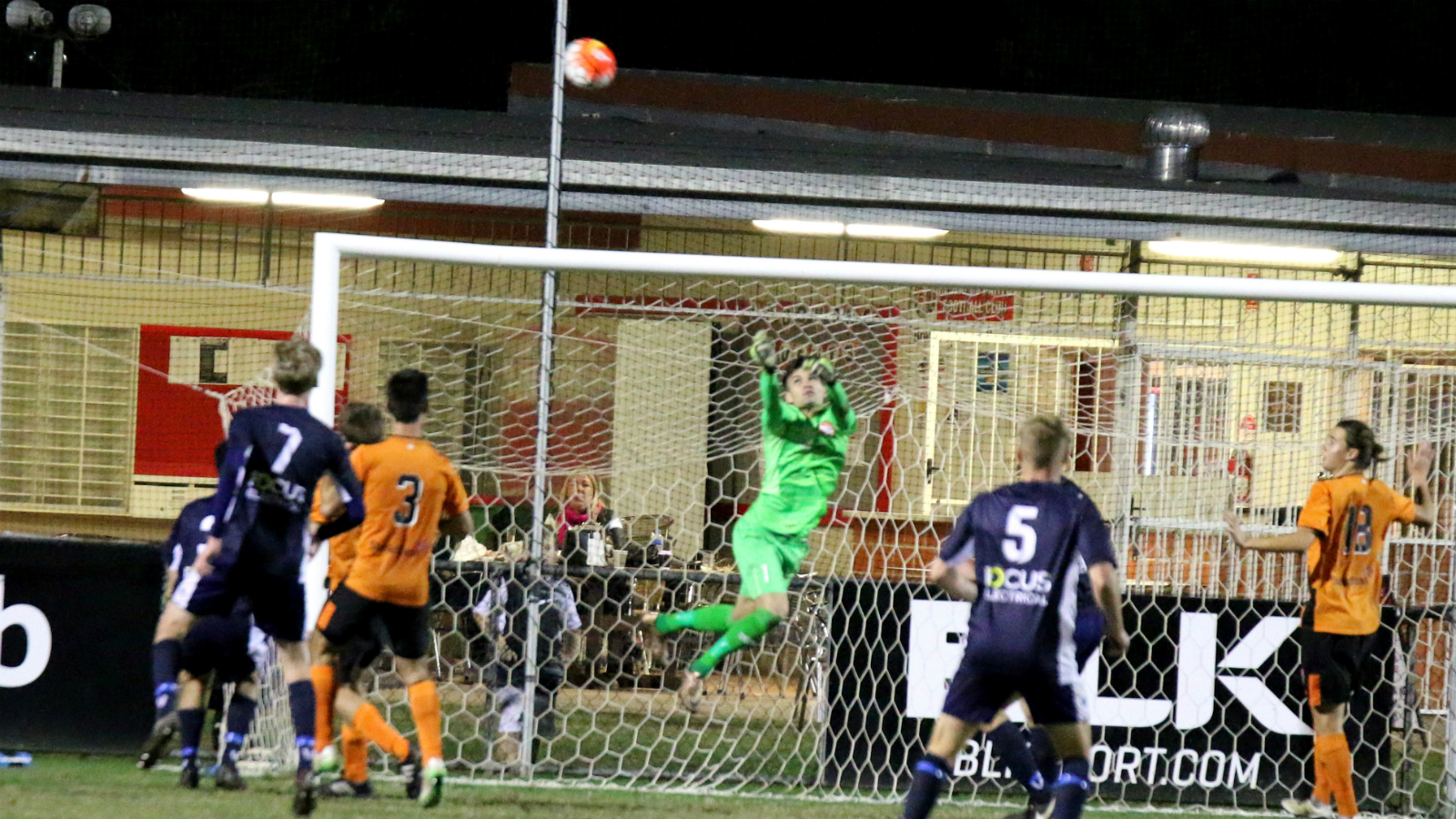 Brisbane Roar Youth Head Coach JOSH MCCLOUGHAN: “I could not have been prouder of the way they applied themselves.

“They’re starting to find a way and work for each other. Every single player that took the field tonight, I’m really proud of their efforts.

“The players who came in tonight were excellent and I’m really happy with how they’re blending as a group.

On Aaron Reardon’s goal : “It was a fantastic goal and to be fair we probably should have had a few more. I thought we were good for the win tonight.

On the Young Roar’s defence : “Hayden [Mchenery] came in and played right back for us and both he and Matthew [Schmidt] played very well, and so did Andre [Jannese]. Cameron [Crestani] and Aaron Reardon have been outstanding for the last few weeks as well so I’m really happy with them all.”

Olympic FC Head Coach TERRY KIRKHAM : “We conceded a spectacular goal, but it also came from a mistake from us at the back.

“We went in the box enough, but it’s just the way it goes. We’ve scored a lot of goals in the last four weeks but tonight was just one of those nights where we didn’t put the ball away.

“I thought the Roar were very good. They closed us down and played very fast and in the first half we couldn’t keep up it with, but we reversed that in the second half.”

Aaron Reardon’s early acrobatic goal is arguably one of the goals of the season, and it proved to be the decisive moment that keeps the Young Roar’s unbeaten home record alive. Young Roar have made Cleveland Showgrounds a fortress this season and have now taken 17 points from a possible 21 at the venue.

The Young Roar travel to Clive Berghofer Stadium in Toowoomba to play SWQ Thunder FC in a rescheduled Round 14 match on Tuesday, 28 June (7pm KO) before returning to Cleveland Showgrounds to face Sunshine Coast FC on Saturday, 2 July (4pm KO).