An early goal and a late clincher sealed the result with Young Roar left fullback Jordan Lampard playing a key role in both.

Lampard hit a pile driver from 25 metres in the 10th minute that Fury keeper Daniel Wilesmith could only block.

Young Roar striker Shelford Dais, who was again his team’s best with a tireless effort over the 90 minutes up front and later in midfield, darted in to toe-poke the rebound into the net.

After a tough battle to hang on to the lead against a determined Fury, the Young Roar clinched the three points in the 86th minute when Lampard and Daniel Leck played a nice one-two down the left flank.

Lampard whipped in a low flat cross which Sammy Sibatuara controlled, rounded the last defender and slotted his shot into the Fury net.

Young Roar coach John Sime, who started five youngsters from the club’s U18s (Leck, Dane Ingham, Tommy Miller, Adam Sawyer and Liam O’Bryan), was pleased with the efforts from the young teens but singled out his “older” players for special mention.

“The older boys all worked so hard and helped steady the ship when we were under a lot of pressure from the Fury in the second half,” Sime said. 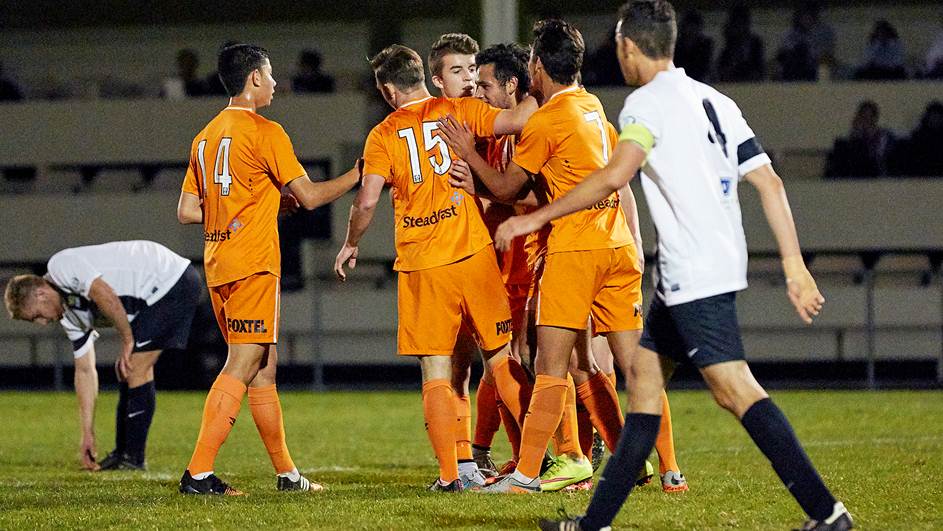 “I think we’ve shot ourselves in the foot tonight,” Ferguson said.

“This was a great opportunity to keep us in the (finals) hunt. I thought this was the kick off for the finals . . . sadly our players didn’t show that.”

Although they led early, the Young Roar had to soak up a lot of pressure from Northern Fury for the remainder of the first half and for long periods in the second 45 minutes.

In the 26th minute – after a series of unsuccessful corners – Fury striker Jake Perry broke away and slipped his shot under advancing Young Roar goalkeeper Tom Bilic, who had raced out of his area to block the attempt.

But to the Fury’s dismay, the ball rolled across the goalmouth and wide of the far post.

In the 34th minute, the Young Roar conceded an indirect free kick just three metres from their line when referee David Wiebe ruled a skewed clearance by Jayden Walker was a back pass to Bilic.

The home side could have gone into the break 2-0 up but for some heroics by Wilesmith.

In the 29th minute he dived at the feet of a charging Dais to grab the ball. A minute from half-time the Fury keeper made a superb save diving to his right to block a powerful shot by Miller from the edge of the box.

The Fury dominated possession after half-time but lacked a cutting edge in the final third and only once really looked like scoring.

In the 55th minute, half-time substitute Stephen Blackburn hit a looping shot from outside of the box that beat Bilic but skimmed over the crossbar and landed in the top of the netting.

In the earlier match, the Brisbane Roar Under 18s went down 2-1 to Olympic FC. The Roar’s goal scorer was Dauntae Mariner.