Five teenagers from the club’s Under-18 ranks will be in the Young Roar Starting XI for the first time when they take on Northern Fury in Round 20 of the PlayStation® 4 National Premier Leagues Queensland at Perry Park on Saturday (kick off 6pm).

All five have played part-games since their promotion from the PS4NPLQld Under-18 squad last month but have not been in the Senior Men’s Starting XI together before.

Sime said each of the five boys had earned their call-ups.

“They have worked very hard in training and have made the most of the opportunities they have been given in games so far,” Sime said.

“We have only a few games left in the NPL and it is important we use these matches to give as much experience as we can to the younger boys as we start preparing for the next (Foxtel) National Youth League.”

The chance to start against the Fury is another positive step in the budding career of Dane Ingham.

The 16-year-old striker says he is determined to repay his coach’s faith and hopes to add to the maiden PS4NPLQld Senior Men’s goal he scored a month ago against Western Pride.

“It felt good to score that goal. Hopefully there are many more to come.” Dane says. 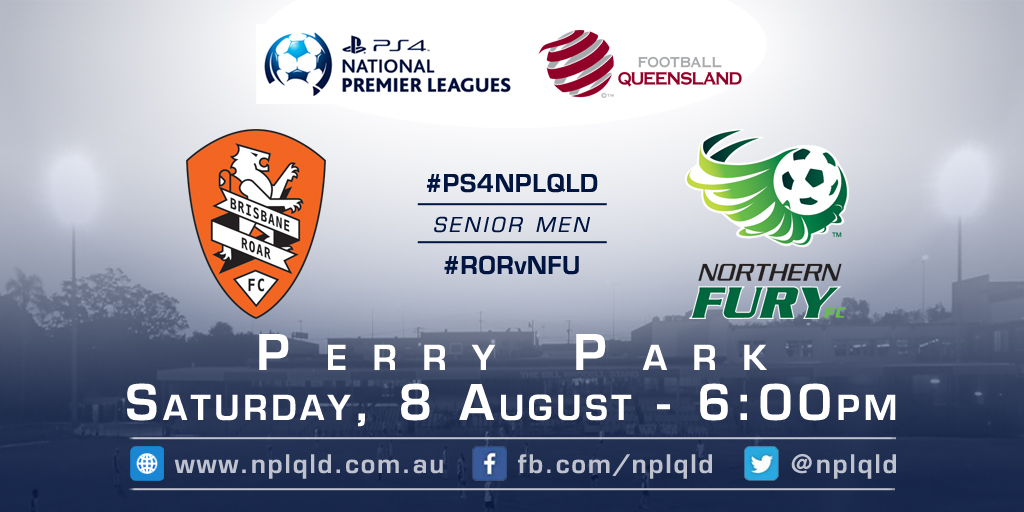 Ingham began his footballing career as a junior in Byron Bay. He joined Olympic FC when his family moved to Brisbane two years ago and entered the Brisbane Roar Youth program earlier this year.

The Cavendish Road SHS student says he is trying to learn as much as he can from his coaches and senior Roar players.

“It is definitely a lot quicker than 18s football, It’s a lot tougher, a lot more physical. It is a big step and I want to prove I am ready for it.”

Dane’s dream is to play in the Hyundai A-League and says he is inspired by his older brother Jai, 22, a former Roar player now with Hume City FC in Victoria. Jai scored 13 goals in 11 appearances for the Young Roar in 2014.

“Jai has helped me so much. He’s a great footballer and a real inspiration,” Dane says.

“I now want to get as many minutes as I can get in the remaining NPL games and hopefully show I have what it takes to take the next step up in the Roar system.”

Admission to tomorrow’s match at Perry Park is FREE. In the Under-18s, at 3.30pm, Brisbane Roar play Olympic FC.