Midfielder Luke Brattan has been named Brisbane Roar’s Members’ Player of the Year for the 2014/15 season and was presented with his award by member Elizabeth Wolfenden at this morning’s open training session at Ballymore Stadium.

The 25-year-old made 24 Hyundai A-League and six AFC Champions League appearances in 2014/15 and was one of the club’s most consistent performers in a challenging season.

Brattan ended the 2014/15 campaign with the highest number of completed passes per game (55.3) of any player in the competition, often inspiring his teammates on the pitch with his pinpoint passes going forward. 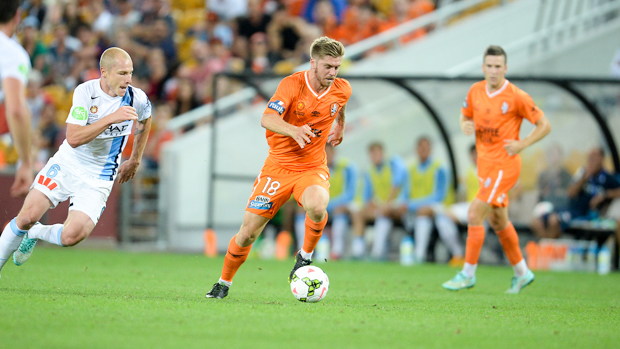 Wolfenden, who gave three points to Brattan in her member vote, said Brattan was the standout player in the squad in her opinion.

“For me, Luke was one of the more consistent players throughout the year – his work rate is always high and he put in some really good performances,” she said.

“All the guys are always great to the fans and I’ve come across him a few times at games, he’s friendly with a smile on his face. He always seems grateful to the members and fans for their support.”