A hat-trick by Nick D’Agostino (above) has steered Brisbane Roar Youth to their first 2016 PlayStation 4 National Premier Leagues win in a comprehensive 4-1 victory over Olympic FC at Goodwin Park today.

The PS4NPLQLD 2015 Young Player of the Year struck the first three goals of the match prior to Joseph Champness sealing the points with Young Roar’s fourth 10 minutes from full time.

The scoreline could’ve been greater had Olympic goalkeeper Nicholas Mooney not made a telling save to deny D’Agostino another from the penalty spot early in the second half.

Ultimately there was only scant consolation for the hosts despite scoring late via Abel Fesseha – the result marking a second straight defeat and seeing the traditional league powerhouse languishing second from last heading into the Easter break.

The result also sees Young Roar move to seventh in the table, sandwiched between Gold Coast City and Brisbane Strikers on goal difference.

24’: CHANCE FOR ROAR – An onrushing Nicholas Mooney makes a lightning reflex save to deny Nicholas D’Agostino’s effort from just outside the box.

32’: GOAL FOR ROAR – Nicholas D’Agostino opens the scoring via a neat four-yard finish after Dane Ingham produced a pin point cross wide from the right. 1-0

52’: GOAL FOR ROAR – Nicholas D’Agostino finds himself with space and time in the box and makes no mistake with the finish, smashing it home from eight yards. 2-0

56’: PENALTY SAVED BY OLYMPIC – After an Olympic player handles the ball in the box, Nicholas D’Agostino steps up for his hat-trick but is denied by Nicholas Mooney’s who saves to his right.

78’: GOAL FOR ROAR – Nicholas Panetta’s pass allows Joseph Champness (below) to outsmart the offside trap, the winger making no mistake with the finish. 4-0 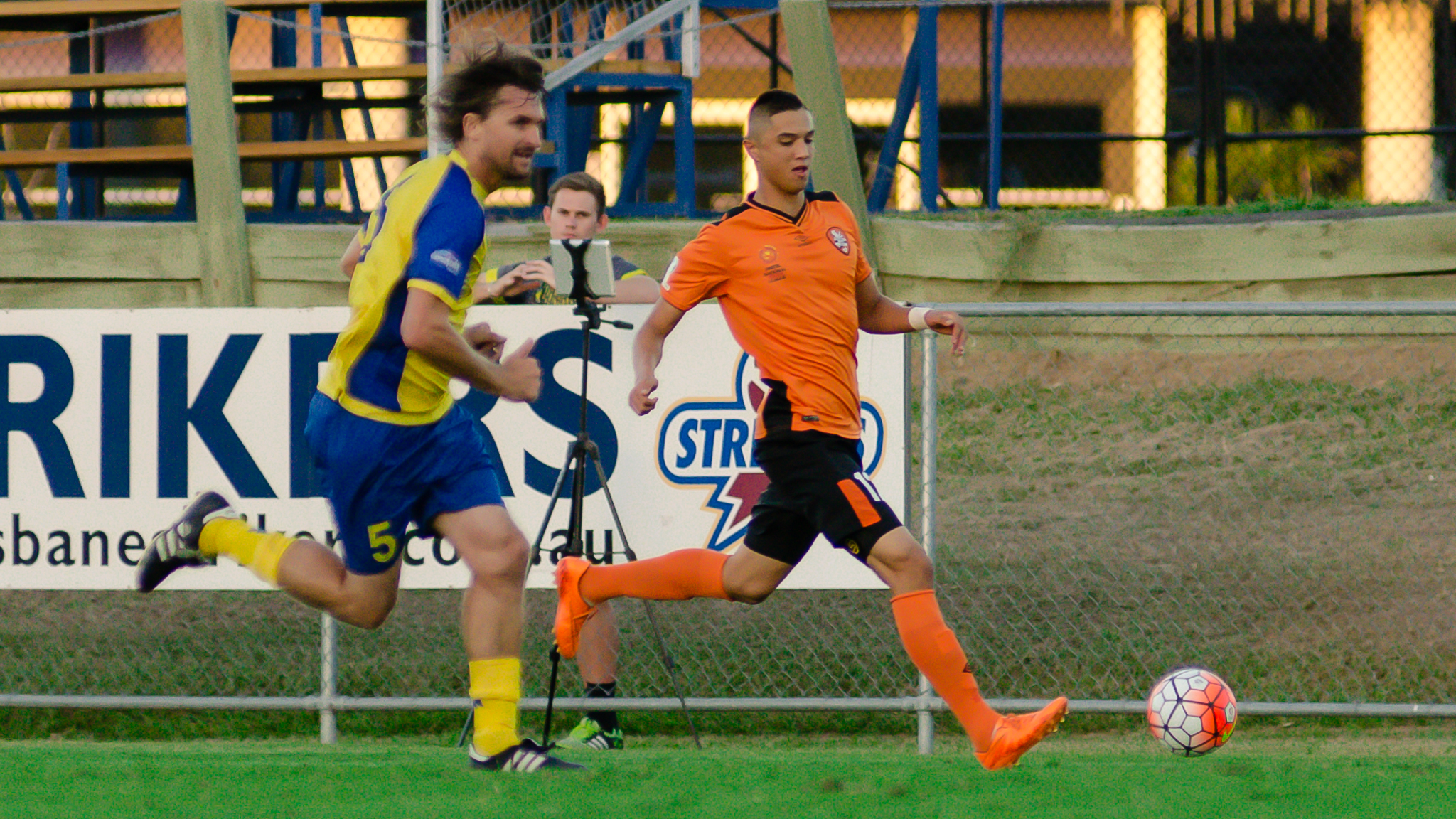 Brisabne Roar Youth striker Nick D’Agostino: “You try to play your best every single game for your club, for yourself as well and for your family. I’ve played A-League once, made my debut, and I just want to get back there. So I’ve got to put in a good performance and show the boss what I can do.“

Olympic FC coach Jim Bellas: “I’ll be getting into trouble for this but they are probably coached to sort of bring us down. Once they sense danger, they bring us down. I’m pretty sure one of them should’ve been sent off. The referee has to bring out yellow cards for professional fouls straight away and they just kept on getting away with it. We kept on losing momentum. But at the end of it all, we just weren’t good enough, but the referees have to play a role as well.”