Brisbane Roar have ended their five-match pre-season campaign with a stunning come-from-behind 3-1 win over Central Coast Mariners on the Sunshine Coast tonight.

The Roar trailed 1-0 at the break but goals in the 51st minute to Corey Brown, Dimitri Petratos just eight minutes later and a third to Brandon Borrello in 83rd minute ensured the Roar will be on a high as they head into their opening Hyundai A-League fixture against Western Sydney Wanderers on Thursday, 8 October.

Thomas Broich’s assist on Petratos’ goal was spectacular and underlined that the German marquee man will again be a force in this season’s Hyundai A-League.

He robbed a defender on the halfway line and sprinted all the way into the Mariners’ penalty box, shrugging off a desperate challenge from Central Coast centre back Harry Ashcroft.

The German then propped and squared across the goal to an unmarked Petratos who knocked it in past stranded Mariners keeper Liam Reddy.

Roar Head Coach John Aloisi praised his players for the hard work and constant improvement during the long pre-season.

He said he was delighted with his team’s attacking second half tonight with the scoreline being a bonus.

“We knew we were going to create chances,” Aloisi said.

“We know we’ve got goals in us. We scored three but could have easily scored more. We know we are a team that has fire power.” 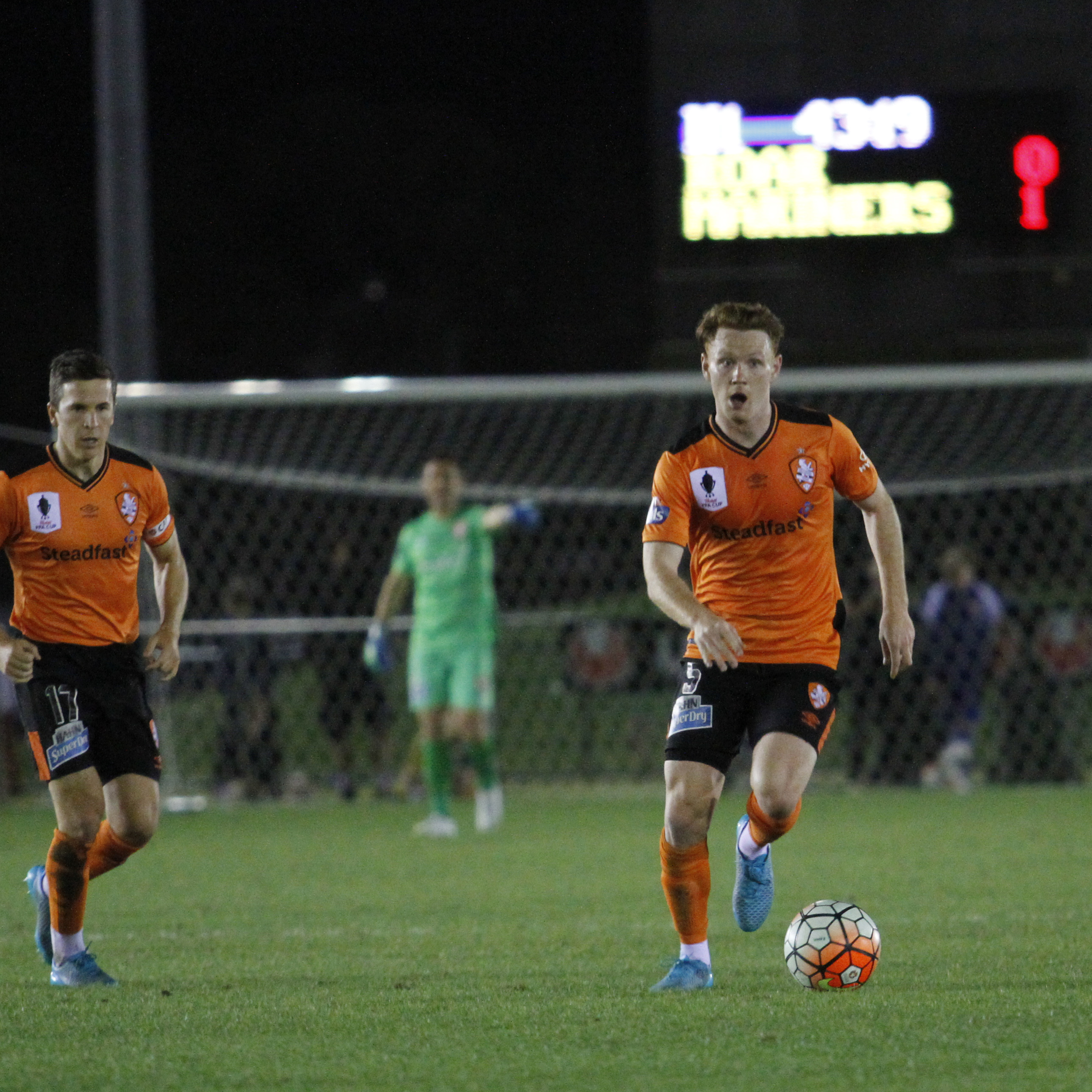 Brown (above) laid the foundations for his goal with a powerful run to the edge of the box where his shots were twice blocked.

But the Roar then fed the ball left where Matt McKay played a low cross into the penalty spot where Brown side-footed into the net in the 51st minute.

Borrello had threatened a number of times and it came as no surprise when he finally got on the score sheet in the 83rd minute.

Petratos played a ball near the halfway line through a static Mariners defence and Borrello ran away to slot his shot past Reddy and into the Central Coast net.

The game didn’t start well for the Roar when striker Jean Carlos Solorzano injured his left foot when tackled in the fifth minute. He battled on but had to be replaced by Dimitri Petratos four minutes later and may undergo a scan early next week.

The first goal came in the 13th minute on the Mariners’ fourth consecutive corner.

The Roar defence failed to clear cleanly again and Mariners striker Nick Fitzgerald, a former Roar player, drove an unstoppable shot from 20m to just inside the left-hand post and beyond a diving Michael Theo.

Brisbane first chance of the game was in the 24th minute when Broich played behind the Mariners defence and Borrello pounced on the perfectly weighted pass to be in a one-on-one with Mariners keeper  Reddy.

Reddy blocked Borrello’s low shot with his legs and although the ball rebounded to the Roar striker, yellow jerseys swamped him before he could get a second attempt on goal.

The Mariners also had an injury set-back in the first half when their captain Josh Rose twisted his left knee in a tackle by Borrello and hobbled off in the 39th minute.

He was replaced by Glen Trifiro three minutes with post-match reports from the Mariners’ dressing room indicating Rose may have a medial ligament strain.

Mariners Head Coach Tony Walmsley was happy with his side’s effort and praised the Roar.

“Brisbane is Brisbane. They’ve got pace and power . . . . they are definitely going to be finals contenders again,” he said.

After a 1-0 Westfield FFA Cup loss to Western Sydney Wanderers in August, the Roar’s pre-season has featured a 1-0 loss to Melbourne Victory, a 10-0 win over the Gold Coast All-Stars, a scoreless draw with Newcastle Jets FC, an 8-0 win over the PS4NPLQLD Under-23 All-Stars and tonight’s 3-1 win over the Mariners. 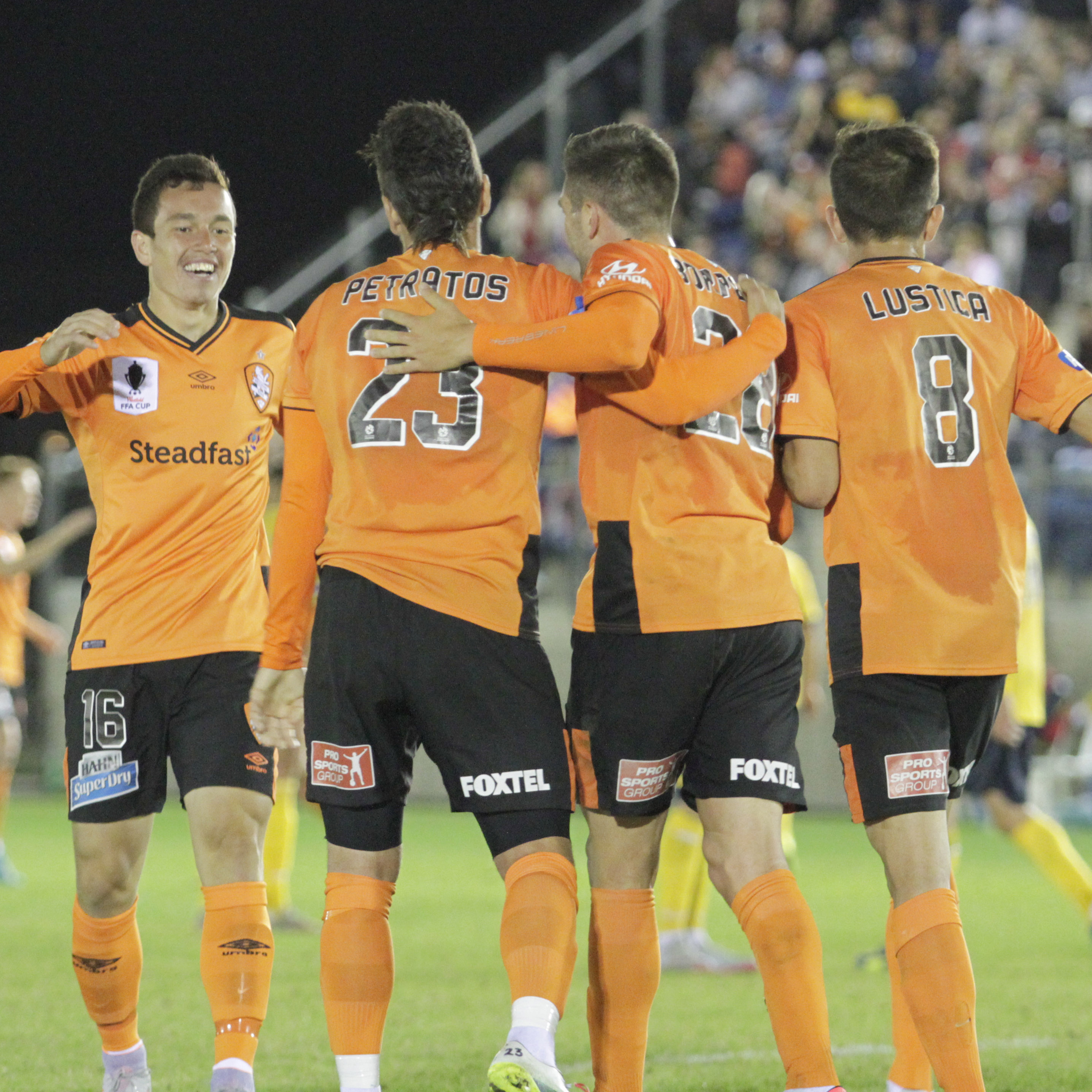