A 10-man Young Roar staged a spirited finish but could not register their first win of the season after a 1-1 draw with SWQ Thunder FC in their PlayStation 4 National Premier Leagues Queensland Round 3 clash at Cleveland Showgrounds on Sunday evening.

The bruising encounter featured an early first-half red card and four yellows with both sides having late chances that could have given them the three points.

The Young Roar had a draw and a loss in their first two games of the season against last year’s top sides – Moreton Bay and Brisbane Strikers – and fancied their chances of a victory against last season cellar-dwellers, SWQ Thunder.

But the Young Roar were reduced to 10 men in the 11th minute when Aaron Reardon pulled back Majok Piok as the Thunder striker turned in behind the last line of Brisbane’s defence.

A man down, the Young Roar soon found that the Thunder are a much tougher proposition this season and could cause more than their share of upsets as the season unfolds.

Despite the manpower deficit, the Young Roar shuffled their line-up and introduced Mark Rodic off the bench to cover for the loss of Reardon (below) . 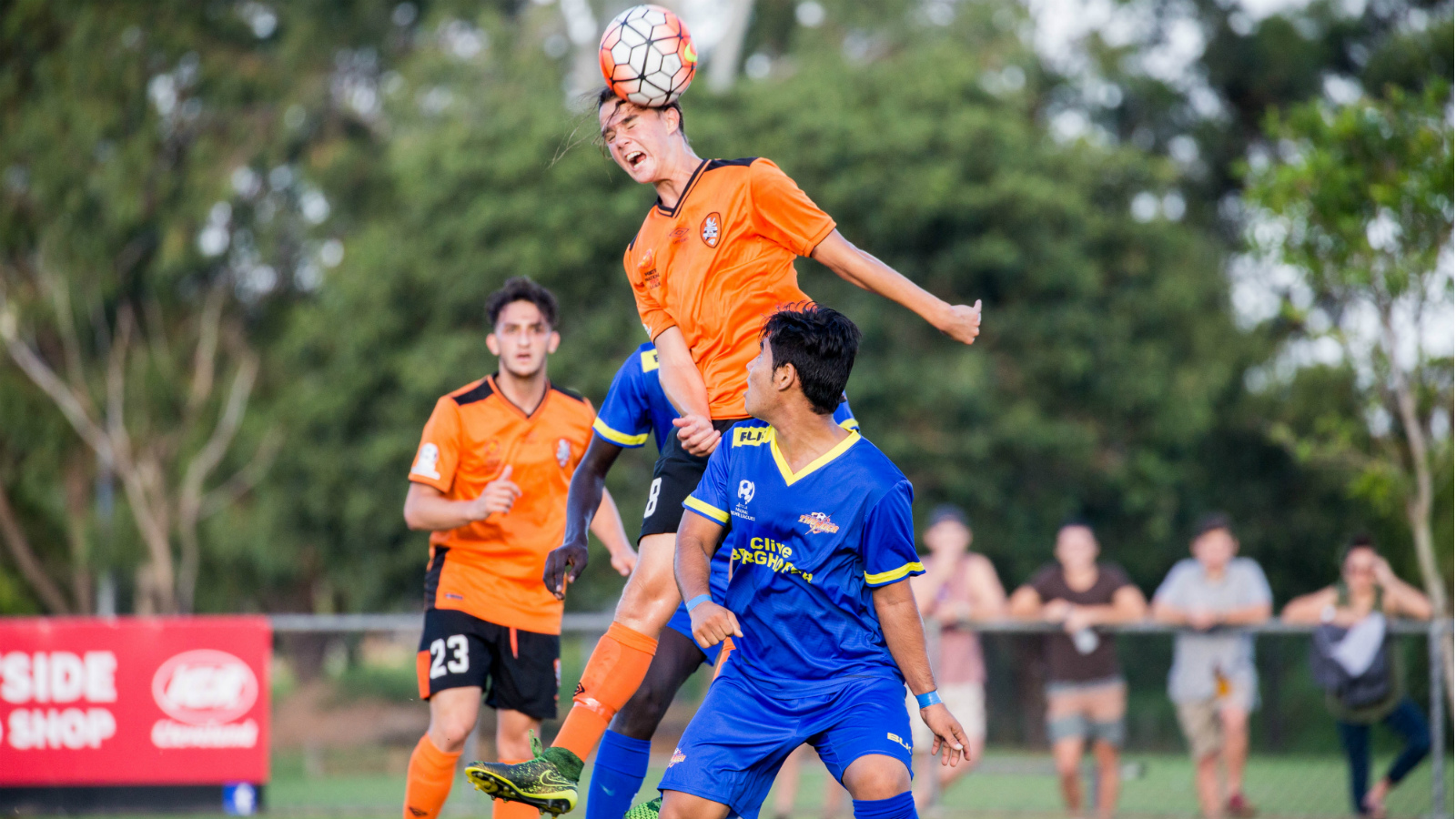 The Young Roar kept their shape and composure and were rewarded for not panicking when captain Jesse Daley scored from the penalty spot in the 28th minute after Joseph Champness was up-ended in the box.

The Thunder restored parity on the hour mark when Jackson Haussler scored with a beautiful lobbed finish over Young Roar keeper Tomislav Bilic, who was caught well off his line.

The final 30 minutes were physical and competitive.

The Young Roar were dismayed they were denied a penalty when Champness was felled inside the area with five minutes to play, while more accurate shooting could have seen the Thunder snatch a late winner. 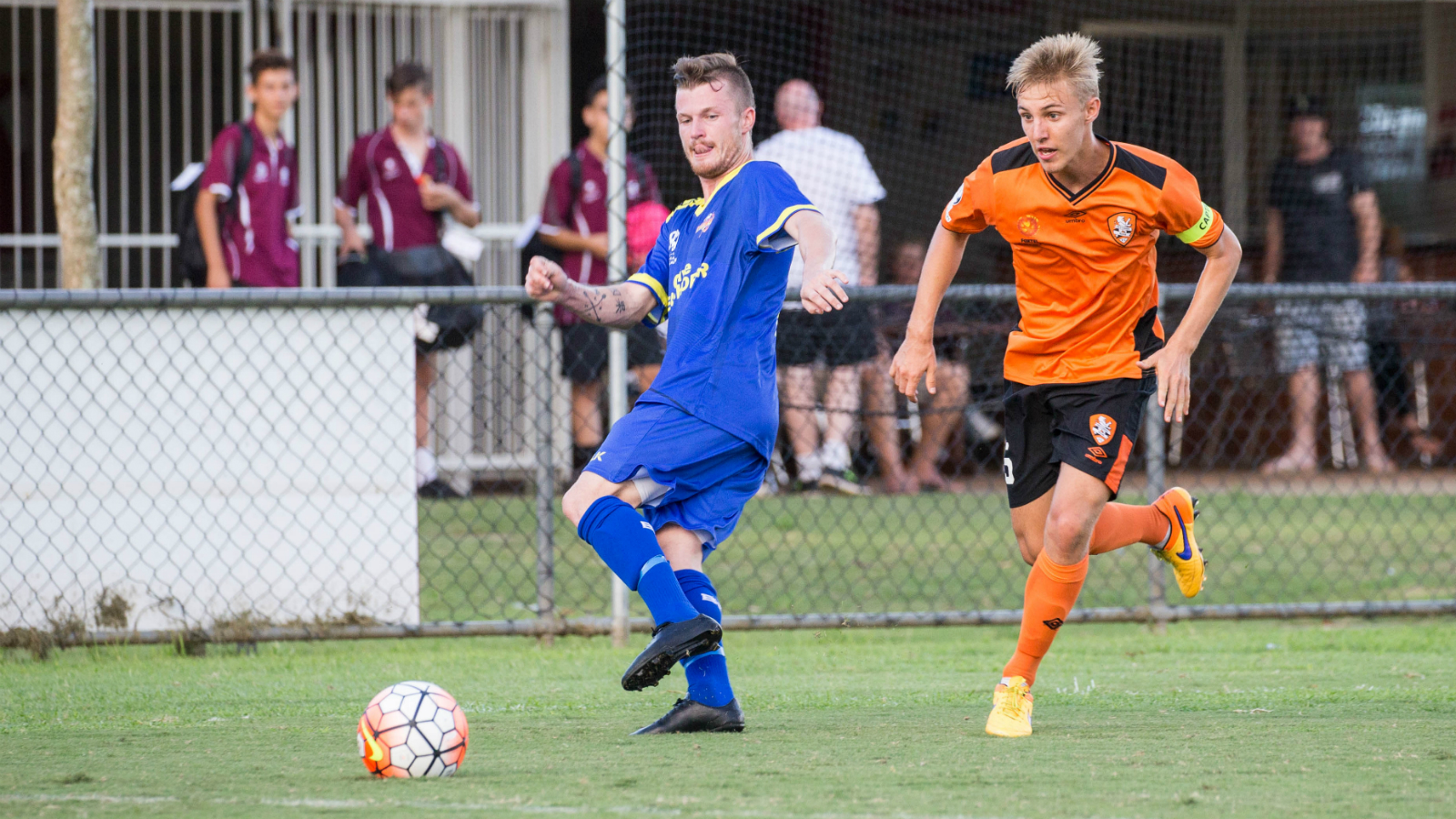 Player of the Match

10’: CHANCE ROAR: Joseph Champness makes a barn-storming run from deep inside his own half before eventually playing to Dane Ingham who shoots. Ingham’s shot is cleared off the line and Champness heads the rebound into the top of the upright.

11’: RED CARD ROAR: Aaron Reardon is beaten by Thunder striker Majok Piok and the Young Roar defender grabs his opponents shirt as he prepares to head goal-wards. The referee sees Reardon as the last man and produces a red card.

19’: CHANCE THUNDER: Bilic races off his line to beat Piok to the ball but his sliding effort doesn’t clear the ball from the danger area. Piok has a shot an empty net but misses the target.

28’: PENALTY ROAR: Joseph Champness breaks into the area before brought down by Xavier Pratt and the referee points straight to the spot.

53’: CHANCE ROAR: Jesse Daley hits a free-kick from 25m in and curls it in towards the bottom right corner. Borean reacts well and gets down low to his left to strongly palm the ball away from danger.

60’: GOAL THUNDER: Matthew Hull plays a terrific through ball from the left back position in behind the Young Roar’s defence which is met by Jackson Haussler who finishes over the top of a Bilic who is well off his line. 1-1

66’: YELLOW CARD THUNDER: Jacob Bigby picks up a yellow card for blocking the run of Dane Ingham in midfield.

75’: YELLOW CARD THUNDER: Keagan Sheridan fouls Joseph Champness on the edge of the area and the referee produces a yellow card.

89’: YELLOW CARD ROAR: The referee waits until the next stoppage and returns to produce a yellow card to Joseph Champness who was clearly upset he was denied a penalty after being heavily tackled inside the Thunder box..

90+3’: CHANCE ROAR: Daniel Leck plays a lethal low cross from the right wing to Dane Ingham ( below ) whose side-footed effort at the near-post goes wide across the face of the goal. 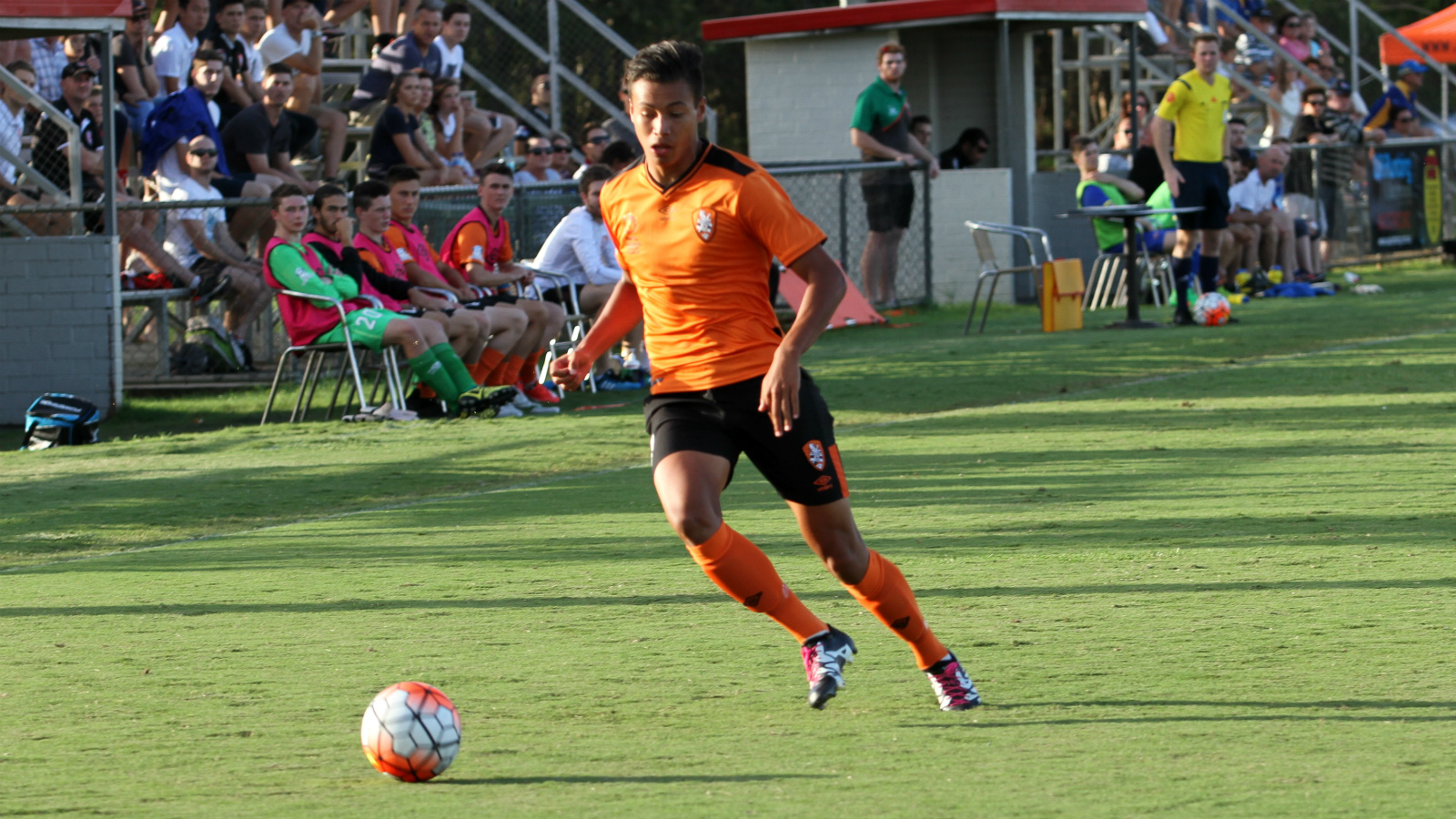 Despite playing with 10 men for a majority of the match, the Young Roar continued to create chances and contain the Thunder in defence.

They finished the better of the two sides and could consider themselves unlucky to not have snatched a win after dominating possession and territory in the latter stages of the second half. 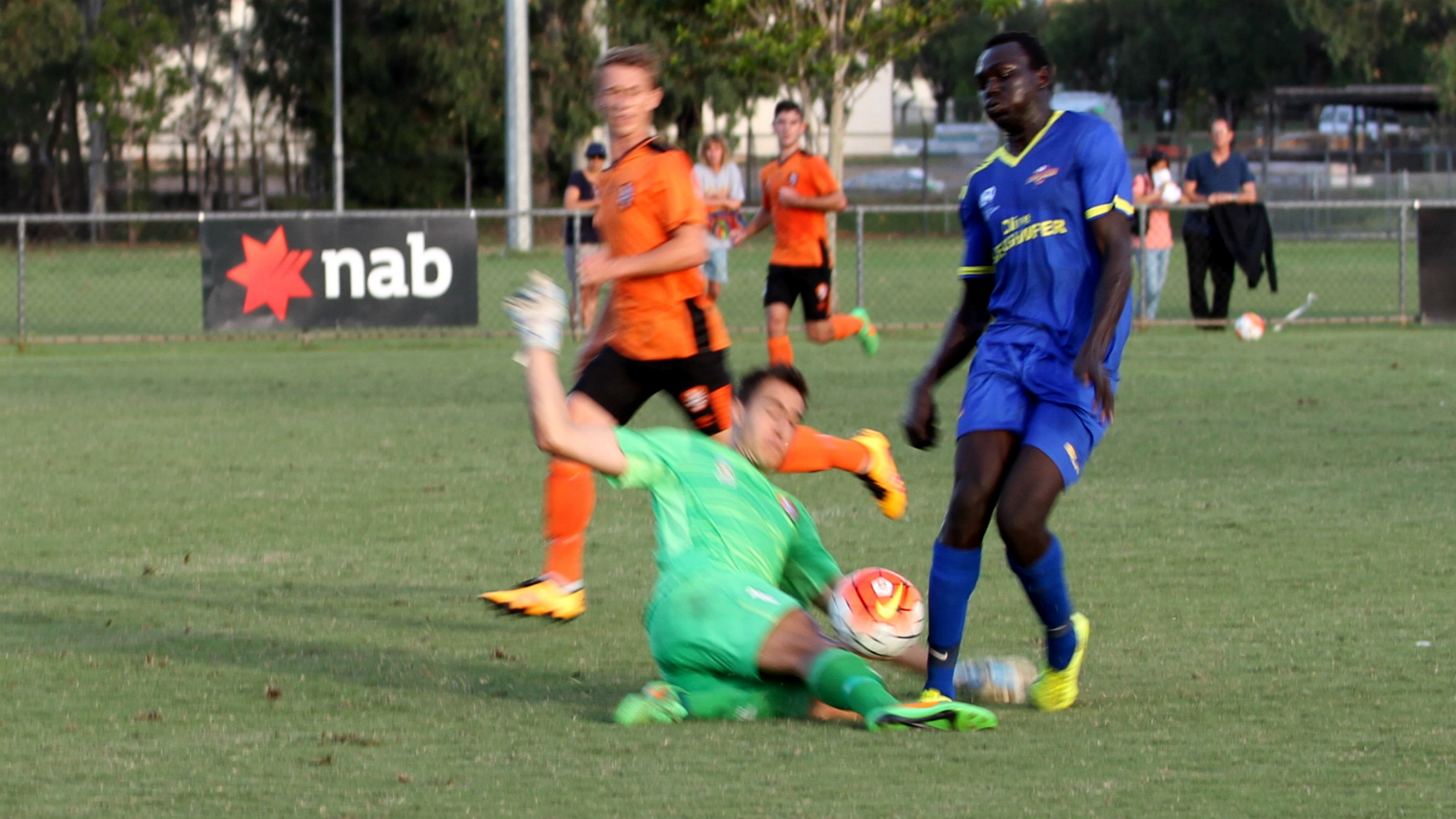 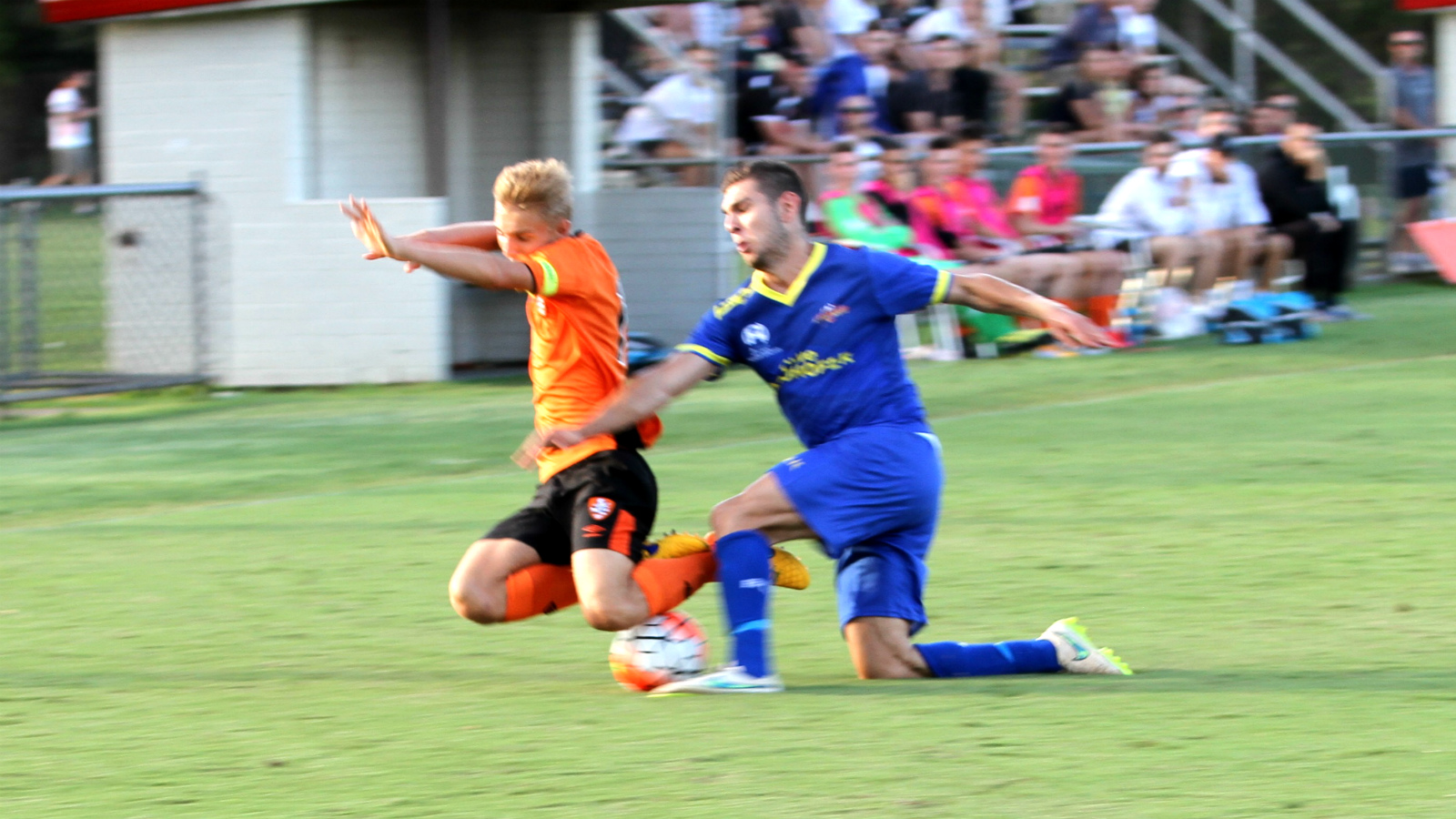