Brisbane Roar Women produced a stunning second half to outplay Western Sydney Wanderers 3-0 and maintain their unbeaten start to the Westfield W-League season.

Two goals from former Liverpool player Emily Gielnik and another from Gabe Marzano (off a deflected Gielnik shot) ensured consecutive wins for Coach Belinda Wilson’s team after the opening round 2-1 victory over reigning Champions Canberra United.

The winning margin was a stunning turnaround after the Roar had endured more than 60 minutes of sustained pressure from Wanderers.

The Roar’s American goalkeeper Haley Kopmeyer (below) was outstanding, making save after save in the first half, and a stunning double save off consecutive point-blank attempts by the Wanderers in the 59th minute. 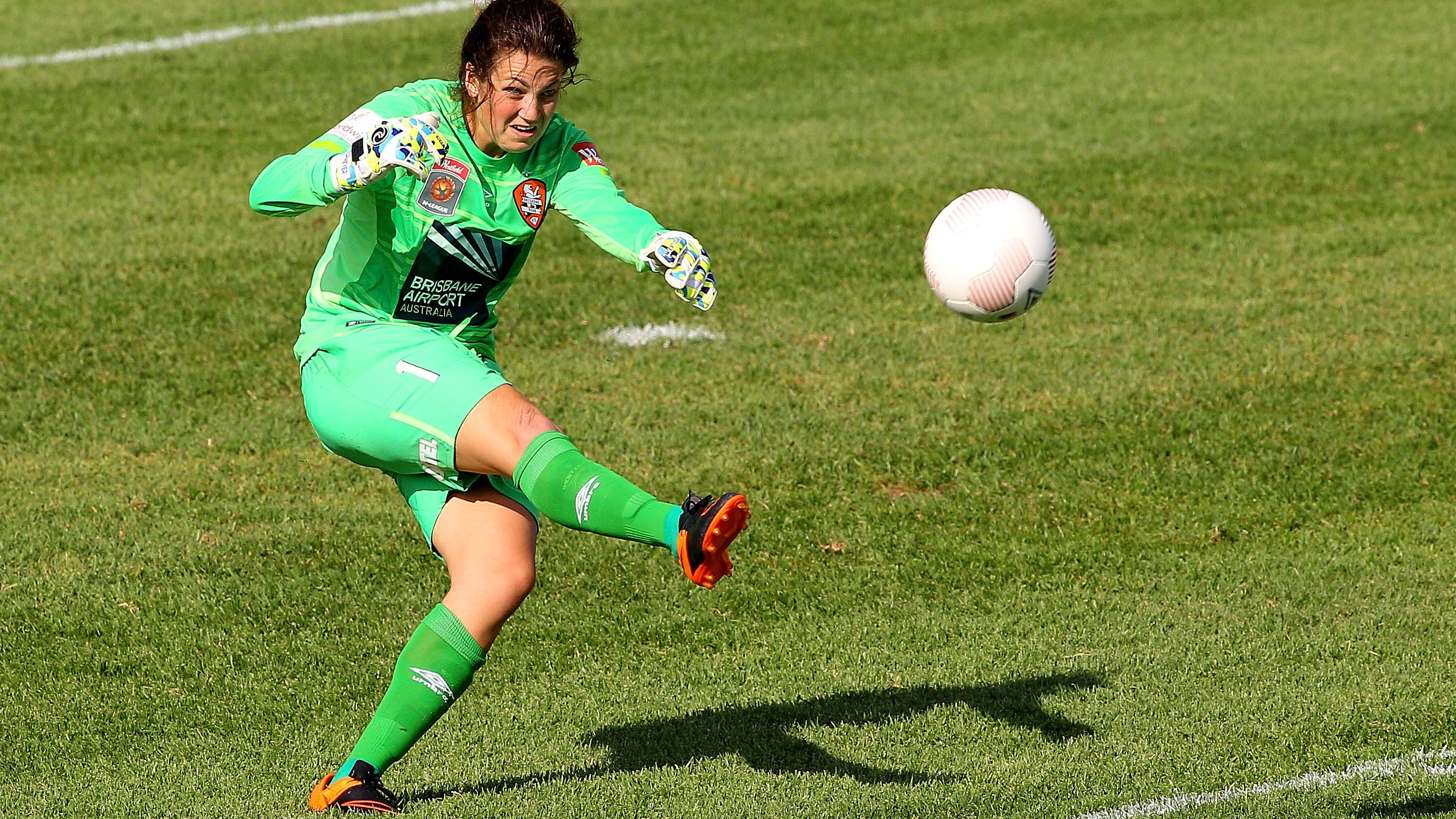 Central defender Ruth Blackburn was also instrumental in the victory as she expertly marshalled her defence and repeatedly blocked Wanderers attackers with brave tackling and aerial dominance.

The visitors also enjoyed a little luck with the Wanderers hitting the wood work and going close on several other occasions in the first 45 minutes.

The Roar went into the match without the club’s three Westfield Matildas – Captain Clare Polkinghorne, and midfielders Katrina Gorry and Tameka Butt who are on international duty in China – and the three-goal victory was testament to the strong depth in a rebuilt squad that includes 10 new players.

64′: After soaking up so much defensive pressure, the Roar broke down the right. Emily Gielnik outran the fullback and shot but her powerful effort was parried by the Wanderers keeper Teagan Micah. Gielnik kept running though and when the ball bounced high as Western Sydney scrambled to clear, she spectacular did an overhead kick into the open net. 0-1

76′: The goal eased the enormous pressure the Roar Women had been under since kick off and they started to push forward more. Midfielder Angela Beard made a blistering run into the box and was felled by desperate Wanderers defenders. Gielnik stepped up to take the penalty and calmly slotted it into the right side of the goal. 0-2

90′: There was no stopping Gielnik now. She surged again through a flat Wanderers defence and once again her shot was too hot for Micah who was drawn off her line but could only parry away Gielnik’s thunderbolt. The Roar’s Gabriel Marzano (below) had made good ground on the left to be in support then outran the Wanderers defenders to tap into the net from close range. 0-3 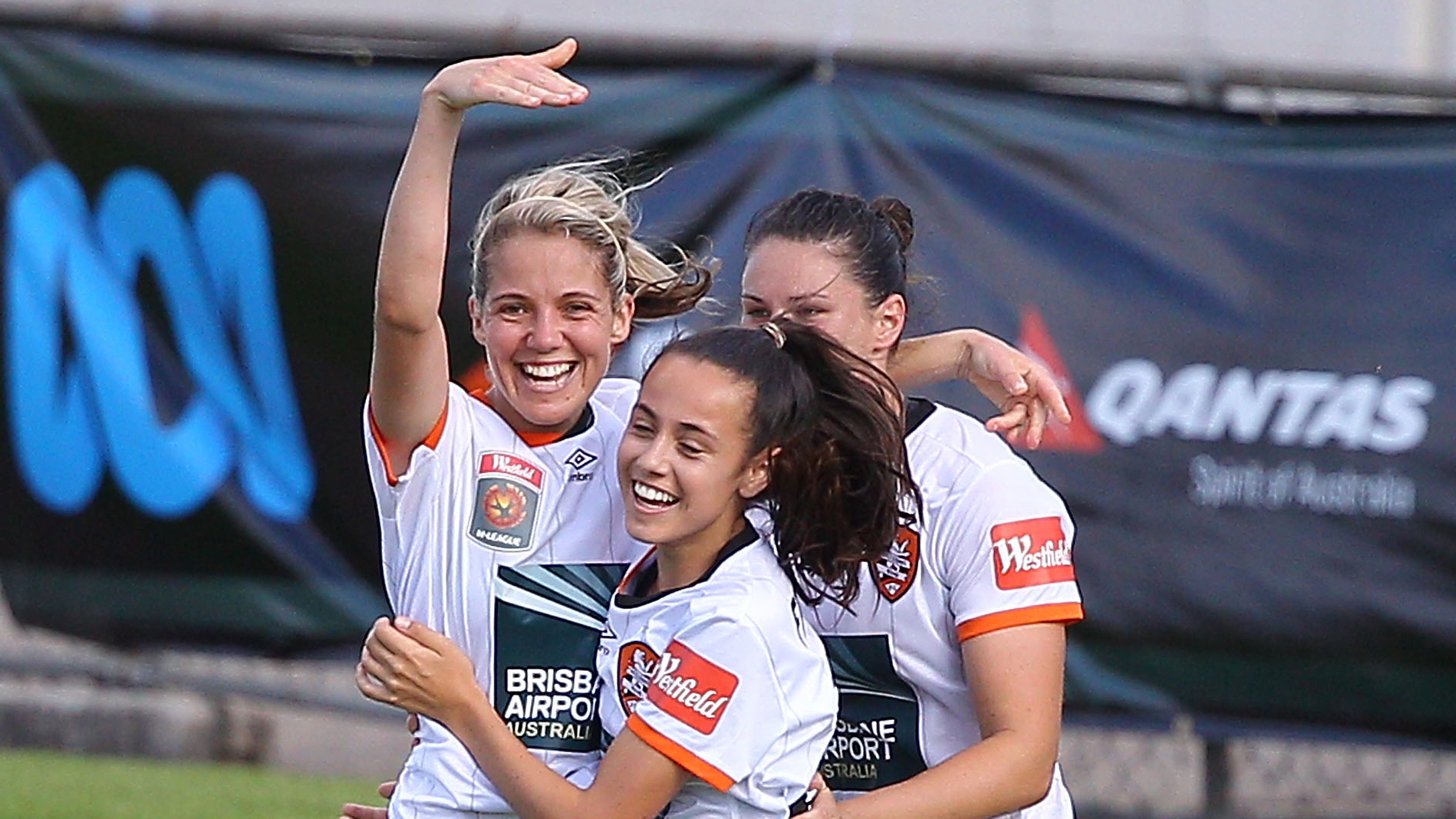 How good is the depth in this squad? Without the club’s three Matildas, they venture deep into Western Sydney and come away with three points in a dominating second half. Wow!

But if there was a turning point, it had to be Haley Kopmeyer’s stunning consecutive one-on-one saves in the 59th minute when the match was still scoreless. Pure class.

Roar Women Coach Belinda Wilson: “It was an important game for us to build on for next week against Adelaide.

“We started the game slow and we will need to work on that this week and make sure we start with more intensity.

“Haley (Kopmeyer) made some excellent saves and kept us in the game and from there the belief came and we created chances and finished them.”

The Roar Women next take on Adelaide United, who are a bit of an unknown quantity with a draw in their only game to date (2-2 versus Western Sydney), on Sunday, 1 November. Please note the venue is Cleveland Showgrounds (Redlands United FC’s home ground) at a new kick off time of 2pm.